LEA (Linden Endowment for the Arts) is a place that is the hope of almost all artists in Second Life because LEA can provide a full sim for artists to create freely! However, Linden Lab will close the LEA in August. Some avatars reacted, they decided to act so that the LEA could be returned to Second Life artists. Two resident, Tansee and Riannah Avora started a movement to return LEA for the artists.

Who are Tansee and Riannah Avora? How did they connect to LEA?

“I joined LEA seven years ago and can contribute my artistic, creative and personal growth as a direct result of my building trials and errors at the sandbox. From that point, I have been fortunate to be awarded both AIR and Core Grants which has enabled me to keep growing and learning. Along with the Grants I have been able to hold several art exhibitions, events, and educational displays. For me the experience has been priceless and continues,” said Tansee.

Different from Tansee, here is what Riannah said, “I came to LEA November 2018, so I have not been here that long. I had never heard of LEA before, as is the case for most people. Someone found me playing with light and shadows in a public sandbox and suggested that I come to LEA. Since I started Second Life, I have loved to build and create things... and I'm not the only one. When I came to LEA, it was like I found my "home" of sorts. I felt accepted. I am fairly shy about my work. I never really wanted it to be so public. However, others at LEA have been very encouraging. Bringing me out of my "shell" so to speak. I just got my first land grant at LEA... and it will be cut short because of the closing. But nonetheless, I will give it all that I have to give.” 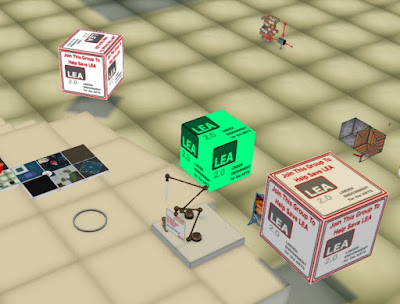 Well, we feel sad about the LEA closing, what do you think about this?

“Sad, very sad. It doesn't surprise me because LEA has been going on for so long and I fully understand that people get tired and need a break. Being in Second Life for nearly nine years now, I've seen places come and go. But if something can be done to save it, I'm all for it. Creating things, (objects, scripts, textures, and particles) is very therapeutic. And the atmosphere in LEA is very calming and people can do their work without fear of being ridiculed,” said Rainnah.

“It was not a complete surprise to me when I heard the news, and like so many others I felt a deep loss. In my heart, I knew that I would only have myself to blame if I did not take proactive steps to see that this would not happen. With the help of fellow LEA supporter Riannah Avora, the Group was formed,” according to Tansee.


Why do you think that LEA should not be closed?

“LEA plays a huge importance in the development of Virtual Art and creativity in SL as well as provides education on many levels. It provides positive social interactions with other like-minded online individuals. Those new to Second Life can come to see and learn the endless possibilities of creating in a virtual world. Friendships have been formed as well as the sharing of skills,” said Tansee.

And according to Riannah: “It provides a vital area and environment that enables people to express themselves via the things that they create, much like real life. There is no other place like LEA. Period. I know so many people who would love to learn, but they have no idea where to start. There are places to help you learn some of it... but they are not like LEA. No one really judges you here. They just want you to succeed in whatever it is you are creating. It's really a great "family" of sorts. And there's always something different to learn from looking at each other's work. No one can be great at everything that they want to do. But with the help of LEA, you can consult with others, learn, and figure it out. That's what LEA is about.

What are your ideas to persuade LL to turn LEA back for the artists?

For this question, Tansee decided to include her ideas along with all the others who are sending her notecards. “We're not exactly sure what it will take, to be honest. We are gathering ideas from our fellow artists. It's not just us, Tansee and me, in this. And we have gotten a very good response so far from other people in LEA. LEA is alive. LEA provides so many things that help people in so many ways, in Second Life and real life. There are opportunities that, without LEA, most people would never get to enjoy and experience. It's freedom. It's like the chains have been undone by being a part of LEA. And with LEA, there's nothing that we can't do!” said Riannah.

She continued, “The world is going to the 3D, VR, concepts of doing things. It would be an advantage if Second Life could say, "We helped". SL has always been great in showing support for many different causes. Their ability to support other real life organizations is amazing. Like with the Fantasy Faire... that totally rocked! Our cause might not be as obvious as some might think. But the people who make great builds, like at the Fantasy Faire, need and deserve a place to be. Most of us work and play here without any expectations on what we create. And a lot of our own money goes into what we build. Not to mention the time involved. We just need a bit of help with the "place" part. SL is great because of the people in it. And LEA is no exception to that. We create things that make SL better for everyone.”


You only have less than two weeks to gather ideas and coordinate with Linden Lab about the return of the LEA, is this enough time for you? How will you work to make it happen?

Tansee answered, “As we know viral can happen in an instant. I hope that anyone who has "positive" input will pass it on to other like-minded LEA supporters. So that we can compile a variety of suggestions. Spread the Word! Join the inworld group to stay informed. URL: secondlife:///app/group/4fec0f5b-ae2d-8cff-3b38-b8763bf2ca68/about

“It will just have to be enough time. We can only do what we can do. And if you don't try, you will never know. We can do a lot of things here, but we have yet to be able to control time. However, you never know when that might happen! There are some really great creators here, never underestimate them,” said Riannah positively.

Many people think that your efforts will be in vain, how do you deal with this?

“That is a great question. I respect and appreciate everyone's point of view and opinion however and I am determined to have a solid focus on taking swift "positive" action. (I can not use that word enough) to the best of my abilities. It is easy to be a critic. My real life background is in business and along with that management and problem-solving. I love the quote by Eldridge Cleaver and have used it many times with others: "You either have to be part of the solution, or you're going to be part of the problem." I invite all critics to share specific suggestions to be a part of the solution,” said Tansee.

“That may be true, having a reason not to do something is easy. But I have never been one to back down from a challenge though. People can say "that can't be done" or "that is too much work"... eh... It's not that I disbelieve them, it's just that I'm a firm believer in "you can do anything you put your mind to.'' To not try at all, is certain failure. To have tried and failed, well, I will take my experience from trying and learn from it. Failure is a part of learning. I'm not afraid of it,” said Riannah.

Has Linden Lab reacted with this plan?

“I don't really know, actually. We are to meet with Patch Linden and Derrick Linden to present our case after they have read over ideas and comments that we collect from our fellow members of LEA. We feel there is a good chance we can reach an agreement. We have to start somewhere, and this is as good of a place as any. We'll go wherever the path takes us. Sometimes just starting somewhere is the answer,” said Riannah.

According to Tansee, “At the present moment, the group was formed to find like-minded positive people who are willing to share specific suggestions. Riannah and I are accepting those in Notecard format and will be credited and presented to Lindens in two weeks. My greatest hope is that they will give us a big thumbs up so that we can move to the next level of Keeping LEA Inworld!”

Do you get help from other avatars to make this happen?

“I have developed a friendship with another avid LEA supporter and Second Life creator Riannah Avora and it was a natural collaboration to work on this as a TEAM effort as we both love LEA and its future. Many who have joined the group and are offering some fantastic input already on many levels. Keep them coming!” said Tansee.

“Yes! We do! There are some truly awesome people in Second Life. Chelo, Rory, Earthling, and Roxy just to name a few people.

This is uncharted territory for us all. Even folks that can't help with the technical inner workings of things are doing a lot to help just by their support and encouragement. But we do need more support! So everyone should contact us that wants to be a part of it.”

“Ending this interview with a bit of philosophy that I live by:

"I'm fearless at times because the only alternative is to be terrified."
~Me (Riannah)

"The great pleasure in life is doing what people say you cannot do." ~Walter Bagehot

Marcel Mosswood
Posted by Bixyl Shuftan at 6:00 AM