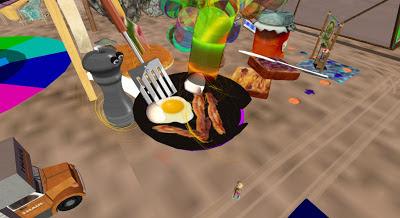 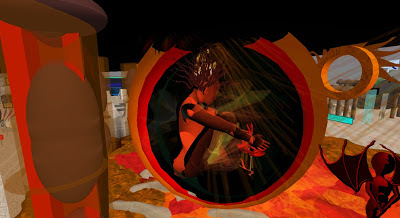 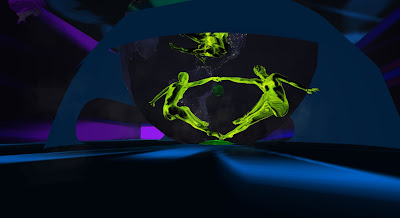 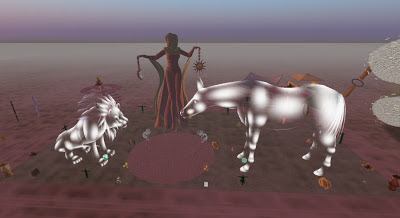 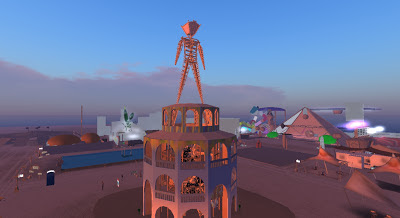 Pictures by Gemma Cleanslate
Posted by Bixyl Shuftan at 6:00 AM No comments:

The new first person shooter offered by Gearbox Software is an excellent game in my opinion. The first Borderlands is and was a good game as well. The sequel follows from the original where the vault hunters Roland, Brick, Lilith and Mordecai from the first game discovered the vault. The Vault was an amazing treasure trove of weapons and riches on the planet of Pandora. Disappointed that there was no treasure they wandered off not to be seen again. 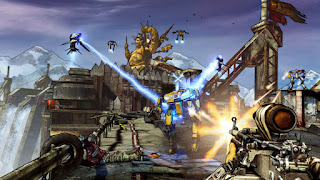 The second Borderlands follows five years later as new vault hunters come to Pandora in search of a new vault. There’s an introduction to the plot before you can pick a new character. The prologue explains that a rare element eridium now is on the surface of Pandora and the Hyperion Corporation is now mining it on the planet.  Handsome Jack runs Hyperion from his spaceship a large H covering the moon. The characters this time are Maya the Siren, Axton the commando, Salvador the gunzerker, and zero the assassin. Each character has a special ability. Maya can phaselock a single enemy and keep it from attacking for a short time. Axton can summon a turret to shoot at enemies for a while. Zero can turn himself invisible. Salvador for a short time can wield two weapons of any kind at once. The other three characters are only allowed to equip a single weapon at any one time. Over time you’ll learn to hate Handsome Jack as the main villain in the game as he does atrocious things.
Borderlands 2 allows character customizing like World of Warcraft. For each of the four characters there are three skill trees you may distribute your skill points that you start to gain at level 5 and up. Maybe I’m nitpicking but gearbox soft could have automatically given your character his or her special ability at level 5, but instead you have to use your first skill point to gain your special ability. However it’s a small thing. As an example the Siren character I play as grease711 her skill tree is geared in Harmony. Harmony lets her bring back other characters in a co-op from dying to getting back on their feet by using her phaselock ability. Overall it’s slanted to being a healer player and helping other players by keeping them from death. I even have the option to shoot other players to refill their hit points or health. A player was shocked that I deliberately shot him and his hit points went back to full. I also dabbled in her elemental damage tree apocalypse. My damage improved as I killed baddies quicker but I lost a lot of my healing abilities. Don’t worry though if you want to reset your skill points for your character it doesn’t cost a lot of money. 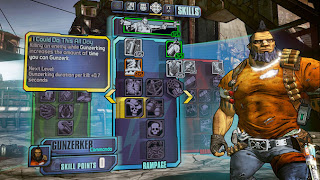 The game itself has wonderful graphics and fun gameplay. You start out with lousy weapons but as you progress through the game mowing down baddies you gain bigger and better weapons like an RPG game but with black humor along with a western feel of first person shooting. Once in a while you’ll see treasure chests with either meah or something worth your time or something that makes you go wow!
Also like World of Warcraft your character is asked to do quests helping out various npc/s you gain experience and sometimes a new firearm. It’s your choice whether you want the weapon or just to sell it for money in your pocket.
The color of rarity goes from white, green, blue, purple, and the very best is orange. The firearms are pistols, shotguns, smgs, assault rifles, sniper rifles, and launchers which fire rockets. The weapons have attributes like reload speed fire rate and how much damage the weapon does per shot and accuracy. Also your character uses shields like a smaller version of energy shields from star trek shows. You’re your shield goes to 0 then you’re vulnerable as any attack hits your flesh instead. You’ll see blood splattered when your shield is off when you’re hit.  Launchers are slow to reload but pack a nasty punch. Pistols do their fair share of damage too and fire faster. Right now my commando has a blue pistol off a quest. Also the weapons that you find have different elements. Fire is very effective against flesh. Shock guns knock down shields fast. Corrosive destroys armored or robotic enemies swiftly. It helps to have elemental weapons in store to wipe baddies out quickly before they have a chance to overwhelm you.
As you progress through the game you’ll meet the characters involved in the story. Each time you meet a new character there’s a dramatic introduction of the character and his or her name. One character an npc you can buy guns from is introduced in a very funny way. A good laugh is a woman npc who you do quests for. A man taunts her for being the leader when he is very sexist against her being a woman. Don’t worry she gets him back.
Eventfully at the end of the game you’ll fight Handsome Jack. The boss fight is an excellent medium between easy and hard so long as you work together with your teammates you’ll down him. And there is a lot of treasure when you defeat Handsome Jack in the final fight so it’s certainly worth your while to fight him over and over again if you want to look for better guns.
After defeating the game there’s a “True vault hunter mode”. It’s a much harder version of the normal game and was very frustrating. Every time your character dies you lose 5% or so of your total wealth as you pay Hyperion to create a clone of yourself. If you’re not careful you could lose a lot of money quickly. One thing an npc says which makes sense in the game, “Money isn’t worth a thing if you don’t spend it.” Don’t be afraid to spend money on something that will greatly improve your character like a new weapon or shield. You’re better off buying upgrades than dying and losing your cash. The more cash you have the more cash you lose per death so hoarding your money is counterproductive.  When you have the chance shop around for a better shield or new weapon. The money you spend will help out your character making the difference between dying once in a while to dying a lot.
The plot itself is fun to follow and adds to the gameplay. Even if you beat the game there’s always the option of trying a new character of a new skill tree to make your character very different. There’s certainly replay value when you play co-op with others. Another neat thing is the voices from your character and the bad guys you fight. The bandits in the game will constantly taunt you or npc/s will ask you to go on a quest in a live voice. The voices sounds legitimate no corny voices in this game. My character the siren will say things like “Cool!” or “I love my powers! “When you phaselock bad guys.
I highly recommend Borderlands 2 to anyone who is a fan of first person shooters or an RPG sort of game. Even after beating the game there’s things for your character to do like leftover quests or the boss from the original borderlands that’s only fightable when you reach the maximum level 50. You can choose to fight him below level 50 but it’s a poor idea as he is impossible to fight and you’ll just lose money dying again and again.
I haven’t reached level 50 yet, but with the game being fun to play and a joy to look at graphically it’s only a matter of time.
Grease Coakes
Posted by Bixyl Shuftan at 6:00 AM No comments: 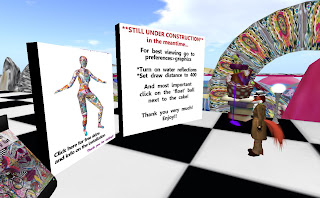 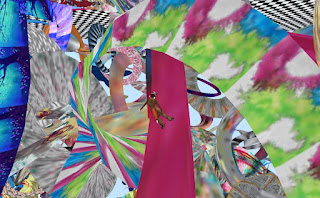 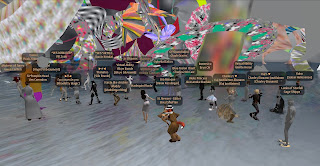