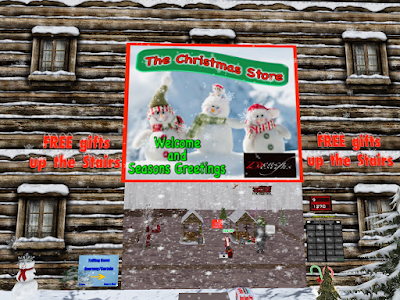 We are being urged to get out there and get our Christmas shopping done now both in real-life and Second Life. Black Friday has passed. I set out to find shopping areas where you can get going on decor for the region or home and have some fun doing it. 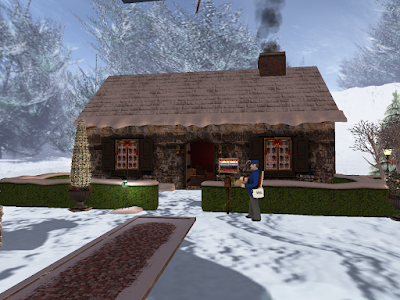 One of my favorite shops to visit is Amanda Dench Christmas Store. Just arriving puts you in the right frame of mind. The little cottage with the mailman delivering cards is one of the first things you see in a light snow falling and glancing up there is the man in the red sleigh . Nearby are many outdoor decor on the snow. Christmas music plays softly adding to the feeling even though it seems early to be doing the shopping. 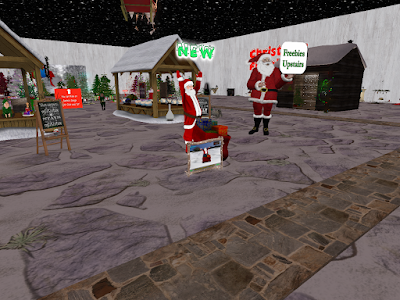 I head inside where there is a lower floor filled with more decor . I am trying not to shop but the first thing I see is a new Santa with a bag of boxes waving at me and into my bag he goes.  I stop nearby to dance with one of the animated dancers but resist buying one.

Oh well, I know upstairs there are loads of freebies waiting. The Advent calendar is set up and ready to begin when the time comes, December 1. The usual gifts are arranged and on the wall a wealth of real bargains to grab. Check out the cute animal carousel while you are there , as well as other decorations to enhance your region or home. Prices here are really bargains. When you visit you will see why it is one of my first stops. 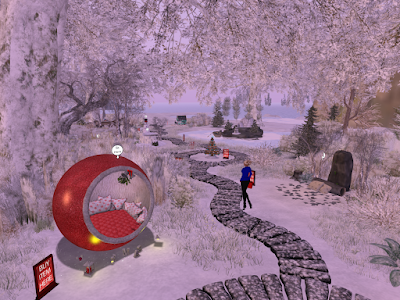 Khargo Christmas Market which has been open since 2009 is a lovely wintry shopping experience. The outdoor decor is spaced along a walkway that makes it easy to envision is on your own land. Try out some of the interactive  pieces. I helped fix the igloo but saw it has many animations to choose. If I had room I might like to have the teacup carousel that spins with the words Merry Christmas on each cup. 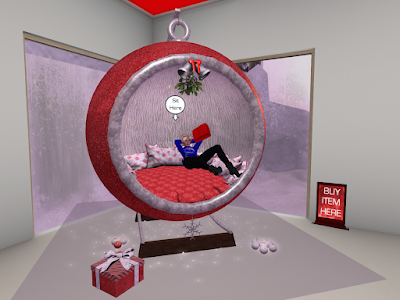 Inside the shop you will find all sorts of decoration for your home, art for the wall, fireplaces, Christmas shelves , and tables. I found a candy cane giver for the wall at home and may go back to get it. The shop is bigger than it looks from the outside with many rooms to check out.

I tried out the Christmas bulb with a choice of resting for singles or cuddles for couples . I was tempted but resisted! There are so many decorations to look at . Plan some time to walk around both outside and inside the shop to see it all. A lot of work goes into planning out this venue. 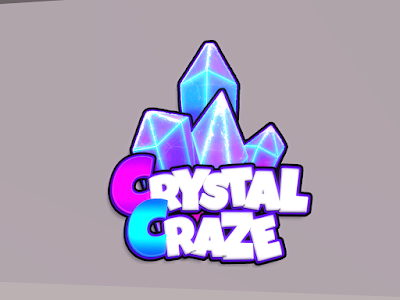 One of my friends, RoxyLee Rayna , who owns the Requiem  region in Second Life told me about a new fun game that owners are using to stimulate traffic. She was having a great time trying it out and recommended that I take a look at it. 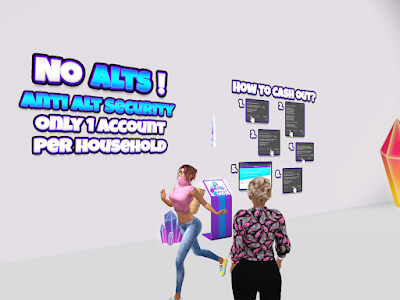 I went over to the Headquarters to check it out. It is called Crystalcraze and is mainly for raising traffic for owners who want that to happen.

“Welcome to CrystalCraze Headquarters, Gemma Cleanslate!
CrystalCraze is a new and exciting SL hunting game currently still in pre-release testing!
Did you know that there is a HUD for CrystalCraze?
You can get it from the sign on the wall to your left.
[08:49] Second Life: CrystalCraze  has given you this landmark:
CrystalCraze HQ
I'm going to send you a LM just in case you don't have one yet.” 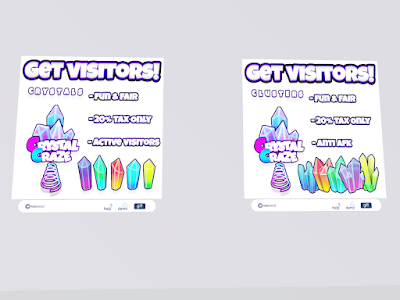 The headquarters is walls are filled with information on how to play to make any new player feel secure. There is help also. I joined the group that turned out to be a very busy chat and notice group . To try it out I got myself a Hud and a basket for carrying my crystals. There was an area there for practice. Joining the group and starting the game give one a bonus of 200L to get started. It is fast moving and has unexpected events held randomly by the owners to give players a chance to grab crystal or clusters of crystals on their property. 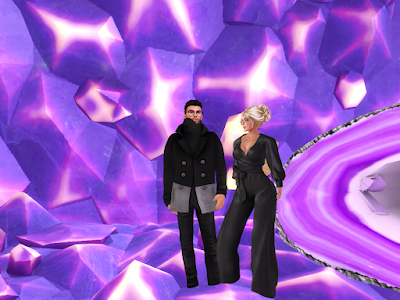 I also met Aɴɢᴜs (anguschill), the creator of this game and found it is still in beta but moving along very well. He explained how it worked and we went off to check out an event. It is great fun chasing crystals. I am pretty good at it because I still run in the Linden Realms for their crystals at times and this game is reminiscent of the realms and yet different. I asked about the traffic aspect of the game and he told me “Yes, they do get traffic, pure traffic stats, but also visitors to their creations of course. I mean there are a lot of traffic games out there. But with CC the idea was to have very active traffic. people who actually engage with landowners builds while looking for clusters and collecting crystals instead of just camping or standing there fishing in one spot.” 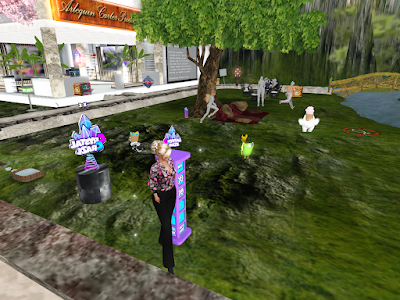 With permission, here is an example of a call to an event ...

“09:37] CrystalCraze:
Arlequin Carter is hosting a 2X CrystalCraze event for 15 minutes!
Head over there and join in on the fun!
Teleport to FRANCE Entraide & Amitie - Build & Script"

Notices come fast and furious at times, one after the other 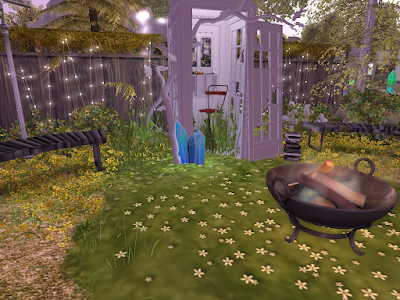 I know that the owners love it too. I checked with my friend Roxy who has been using it for a few months to see how she likes it and she told me ,, “oh  that's great  Gem .. All  good for me.. love the game too .. is  fun and rewarding . I have clusters and Crystals at my sim and is a good traffic booster more than the other games..100% quote me” and about the creator of the game she said “He works really hard  and is a nice friendly person too  which helps  with  games” 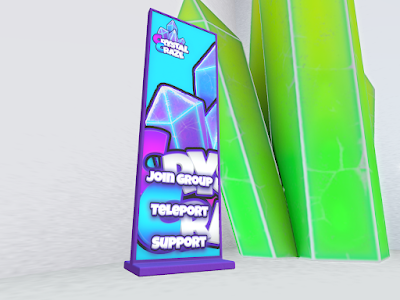 Watching the calls for 15min events I can see the other owners of the parcels feel the same way and have fun doing it. It is a great way to make lindens for all the participants “ Angus makes a low profit but I think he created it because it he has a lot of fun watching and engaging with the players and the owners . I recommend it to anyone who is looking for a way to get more traffic and also to avatars who are looking for a way to make lindens. Go try it!

Check out the website to see the rules and places that have crystal hunting  and more information  https://crystalcraze.zeezeo.com/index.php  , and then visit the headquarters. Good luck and have fun!! Run!!