Last week, my article mentioned a release party for a new mod for the SPACE-A-LOPE at MIDI and Furzona This week, I got to interview the creator of the now released SPACE-A-LOPE, Dr Prawn (badasslobster) (also known as Doc), and pick their brain about their creative processes when working on mods and more.

Cyfir: What got you started in modding and why did you open a Second Life store?

Doc: So modding was a consequence of being held back by the traditional sandboxes. I decided to do what I wanted instead.  Early on when I started Second Life, I heard it was an open world full of possibilities. So, I took that to a literal sense. Thus, I made a screaming house fire. Which got me labeled a griefer. But I was laughing, why couldn’t everyone else? As time passed, I wondered how I could make content that kept my childish whims while creating something beautiful and tangible yet inviting to all levels and types of people within Second Life.

Cyfir: How did you come up with the name for your store?

Doc: Genetic Love’s name came from an old project that got revived for a time, but didn’t make it in the end, although now it shares the same name as my upcoming comic. So, I put it into the mod store. I have a deep and enthralling love of science and genetics, so why not change the DNA of your avatar?

Cyfir: What programs do you use?

Cyfir: What advice can you give to anyone thinking about starting to mod for Second Life?

Doc: Fear nothing. Do whatever the hell you want to do, and more importantly what you love. Take the raw imagination in your head and put it down on paper no matter what. Don’t be afraid if it doesn’t look perfect, everyone starts somewhere. Be proud that you took those first steps. Make sure to give yourself ample time to complete your commitments while still tending to your mental health and celebrate fiercely when you complete anything. 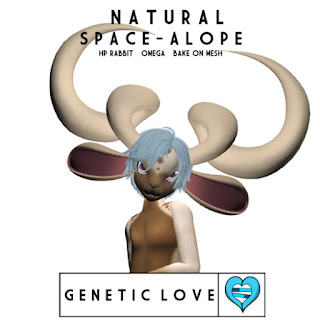 Doc: Last year I moved to Texas to join the moon of my life. After leaving New York and regaining some creativity, I became fascinated with lore of the south. So, what better than the crazy legend of the Jackalope. As for the space part, that came in because of my history with Genetic Love. My first mod was the Space Dragon, which lore wise are exactly what they sound like. Your traditional dragon, but with exotic colors and love of fiestas!

Cyfir: Can you walk us through the process of the SPACE-A-LOPE’s creation?

Doc: Before you even model a single polygon, it all starts with a preliminary sketch. I wanted to be done in a reasonable time, so instead of doing my usual massive amount of conceptual art, I googled pictures of Jackalopes and sketched next to them until I found the iteration I loved most. There were even versions with wings! But, at the end of the day a lot of the crazier versions detracted from the simplicity of what Genetic Love’s concepts are. So, I cut back, I knew the horns were the centerpiece, so from there I began color blocking, finding what the right feel for this avatar was going to be. Once I found that, I put some money down on a shading kit, and began my work on the actual mod itself. There were a total of 12 prototypes until I settled on the final pattern that you see on the mod today. From that point, there was a lot of focus on color theory, figuring out which colors would be the most appealing to market. The classic Space-a-lope is very much a carbon copy of my original space dragon, right down to some of the original raw files used. Once all the texture work was done, I coded all the Omega Appliers.

But what a lot of people unfamiliar with being a creator in Second Life don’t know is the insane amount of time that goes into marketing and launch. It’s one thing to make a mod or a creation, and an entirely different beast to make the vendors, and build the gallery. I work hard to ensure even the pictures on the marketplace are flawless. Some of those pictures took hours to get right where we needed them so that we could separate ourselves from other makers as truly professional. When you step into a Genetic Love pop up shop, or go to an event, we want to make sure you feel whisked away to another world, to our Bauhaus so to speak, that the product speaks for itself. I do have the luxury of an excellent team, in fact, the vendors were made by my great friend and MIDI founder Lain Lycoris. My friend Zooks helped with some of our photography, and even my other half Altair Luna Sol modeled the Space-a-lope for the launch so people could better understand what they were investing in. We go so far as to develop each version of the space-a-lope into a fully-fledged character. Zooks and I have an everlasting and passionate love of fighting games and drew deeply on that when it came to building the personality and lore for each version of the Space-a-lope. For example, the “Natural” color of the space-a-lope is named Sparrow. As you will see from the pictures in the gallery he loves to spar, as he is pictured having it out in an old school brawl with “Kala” the classic Space-a-lope. As you will see all the other colors and versions are full of lore and personality. This was truly a labor of love, through and through. In fact, there will be a full bio for each character on the marketplace listings.

Cyfir: Tell us a little bit about your club MIDI.

Doc: So, I should clarify I don’t own it, that would be Serra / RaishiFox, with the help of Lain Lycoris. Rather, I got into MIDI long ago and was lucky to find a home on staff. I was DJ’ing at the ARK, but I felt like I didn’t have much of an audience, or rather one that was into my abstract music. But one day, I was offered a job with MIDI before it had even opened yet. I was unsure at first, but I had nothing to lose, so one teleport later and I quit immediately with the ARK and went full time at MIDI. It was the first time that I found home. I felt understood and accepted for who I was, and was allowed full creative expression as an artist, without any of the traditional and archaic club rules that prevent a lot of talent from blooming.

Cyfir: What do you have in mind for upcoming projects for your store?

Doc: First things first. I’m going to create a brand new, open source shade kit for the Second Life body, as well as Omega compliant bodies. The reason why I’m working on that first, is that most of the shade kits you see on the marketplace now are incredibly restricting. Also, I had a really horrible personal experience with the shade kit I purchased recently. I think it’s unfair the stranglehold that some of these creators have had on the marketplace, and the “Boys club” that some of this has become. So it’s my goal to make this open source, and community driven! So, anyone can go ahead and add any component, remove anything they want from the shade kit and put it into their own projects. And the best part is, it’s free, because I believe everyone should have freedom of creative expression without barriers.

After that is completed, the Genetic Love team and I will begin work on the SunF**** project. It will be in keeping with our current theme of mythical creatures. It is a nod to my current fursona, and a nod to one of my favorite bands, Swans, who has a song of the same name, which describes the creature in question. We are extremely excited to share this with all of you!

Cyfir: What would you say is most rewarding about making stuff for people in Second Life?

Doc: What’s the most rewarding part is seeing people get excited or fall in love with our products. Genetic Love is truly its own entity and different from many other stores. We are mod and creator friendly by design, which has really done a lot to make people go nuts for things that we make. Even better seeing what people do with our mods when they begin to sell. The way they make unique and original characters for themselves to live their best life. It brings me so much joy to help give them that. Another thing I absolutely love is when people take a species we have created, and make yet another new species from it, like a blossoming family tree! It’s truly the heart of what Genetic Love hopes to share.

Cyfir: Is there anything else you would like to plug?

Doc: Shout out to all the pears! Zooks, Art, my right-hand man and brother. Lain, my mentor. Altair / Infidailia, my loving partner for helping translate my nonsense, and keeping me sane, without her, this interview would’ve had far more profanity and broken desks. Shoutout to Xii from Apricot Paws! Shoutout to all the people who support us, and this project for over six years now! Of course, shoutout to MobianAngel for keeping me together, and being an amazing advisor and friend. (Checkout their YouTube! Smash that like button!) Finally, thank YOU Cyfir for this interview, I hope we get to do this again soon.

Cyfir
Posted by Bixyl Shuftan at 6:00 AM 5 comments: