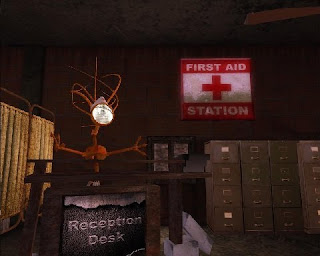 Recycling is great. However, have you considered what it might be like if it were overdone? I really had not thought about it until I visited LEA22 When I landed I thought I was in a hobo land, or perhaps a dump. The winding rickety wooden path leads to many areas that are so indicative of what could happen, perhaps in the distant future when all our recyclables take our place in the universe. Wow! As a blogger I saw my replacement! That was scary. Not me as a person or an avatar but as a canned creation.

At the orchard I saw that rolls of toilet paper and books have taken the place of leaves on the trees. I stopped off at the medical center to check out the help in case I fell off the walkway and to be honest I was not thrilled with the help there. I love computers and their capabilities but wonder if they can put on a bandage! 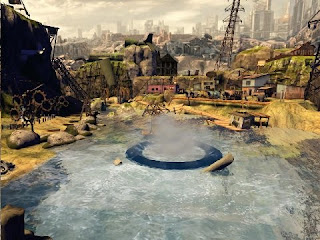 I worried about the water there which was sucking all the boats into a whirlpool! School was not fun either! The teacher, known as a funkyjunkian did not look as if he, or she, it had any compassion for humans, and the students, well. You will come across other funkyjunkians as you traverse the sites.
The creative thinking that went into creating this sim was fantastic. The thought into the possibilities of overdoing a good thing is really something to explore in real life and in Second Life.  I wonder how someone could come up with this concept and all the work that went into it. There is so much to see and explore that I cannot do it justice. Just go have fun, but be careful where you walk!
There is an archeological dig going on at “junkpeii” for the former inhabitants of the region. You will see it. Here is the entrance. Have fun!
http://maps.secondlife.com/secondlife/LEA22/235/34/22
Gemma Cleanslate
Posted by Bixyl Shuftan at 6:00 AM No comments: 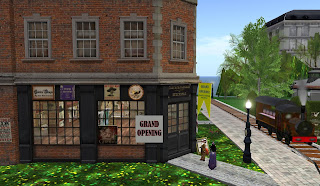 Shockwave Yareach and Cynthia Farshore are noted for their activities and builds in the Sunweaver Estates. Recently, the two have teamed up to run a store in the Caledon Steampunk community: "Yareach and Farshore Mercantile" at Caledon SouthEnd. I met up with them to discuss their new venue.

Cynthia, whom already has a location at the Sunweaver  community, "The Puddle Jumper" at the Pacific Waters sim, explained she was "expanding my stores." Just after I had gotten there, a train chugged by. "We have a whistle stop right in front of us," Cynthia mused with a smile. Shockwave then walked over, "I can never catch that thing." Both were dressed in the Victorian style of the location, Shockwave explaining with a grin, "Gotta look good on my lady's arm." 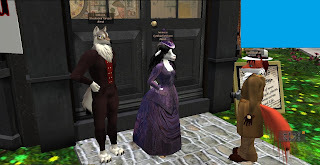 Cynthia explained how the store came to be, "Well, I wanted to have a residence in Caledon and when I found this building, it became clear I could make it a shopkeeper residence, as it is an 19th century building with a living flat above. ... Since I already had steampunk vendors, it was a cinch to set up a store in Caledon. Shocky and I are adding in our own goods to sell as they are ready." Taking a look inside, there was already a variety of wares. The items being offered for sale, Cynthia explained, were, "Victorian, Steampunk, and Western wear and goods. Vendors include Doc Wrangler Men's Wear, Swank Brothers, Golden Oriole, and others. ... I will be constantly looking for new products to sell and in work on many items of my own. ... I have some items that will be updated to a sculpted object so as to reduce prims."

Shockwave added, "The infamous innertube system is for sale here - first time ever and only in her shops." Amused, I asked, "How is it infamous?" He answered, "I'd put some out, see what was good and bad, improve it when I was bored. ... You know how frequently I'm bored in SL? Rarely. I'm delighted to have a patient partner like Cynthia." I then asked, "Was this the inner tube system at the original Angels Beach Club?" Shockwave answered it was, which brought to mind some incidents in the past of "accidental furpiles" caused by groups of people using the inner tubes at once, and instead of the tubes fading away when reaching the shore at the end of the ride, they'd stay on those using it, and if no one got up, the result was a pile of inner tubes with the people still in them. "I see why it's infamous now," I commented with a grin.

Cynthia went on about her building, "I am learning to use Blender, one item I made using it is on the table, an Iron frying pan." Shockwave commented, "I can't use blender.  Can't wrap my head around it." Cynthia spoke, "Now I am limiting what I sell here to what fits the theme of Caledon so more modern things will be at the Puddle Jumper." 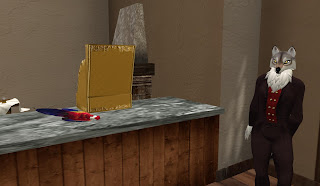 Shockwave continued, "And the lady has an iron-clad warranty on parrots purchased here." I then pointed to one that was "sleeping" on the counter, "Like that one?" Cynthia looked over, "Umm, Oh yeah. We had a problem with a customer claiming we sold him a dead parrot." I chuckled, "What's the story there?" Shockwave stated it wasn't entirely unsimilar to what happened in a pet shop in "Monty Python." Chuckling, I asked, "so how many parrots has the store sold?" Shockwave answered, "10,000! ... Well, 100 ... 2 actually ... including that one." He looked to Cynthia, "And um, love, did we decide to count the one that flew away as a sale?" Cynthia answered, "Uh noo hun I counted the fly away as a lose for income tax purpose." Shockwave responded, "Ah. One parrot." I chuckled, "Sounds like your customers have given you the bird. ... So I guess the parrots haven't done so well?" Cynthia told, "I think we'll no longer carry them, hate changing the newspaper in the cages. NOT yours of course!" I chuckled, "Old editions of the 'Herald?' " Shockwave mused, "The only newspaper that smells fishy before you wrap fish in it." Cynthia remarked, "problem is getting the fish to stay wrapped, it doesn't want to be wrapped in it." 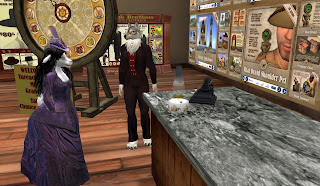 After some more chuckles, I asked, "So besides the inner tubes, what else looks especially promising?" Cynthia answered, "I have been working on home items such as this kerosene lamp." She then placed on on the counter, "This is almost ready but it needs to make light." Shockwave commented, "Hurricane lamps I've heard them called." Cynthia turned it on, "It shows the flame but it needs to cast light yet. ...Now I will also have it set so you can say light or light out and a number of lamps in your house will all go on or off together. Or you can touch each and only one will light." She went ahead and tried it out, though my saying the key words did nothing, "... it already has a secure script. Anyway you see how that will work." 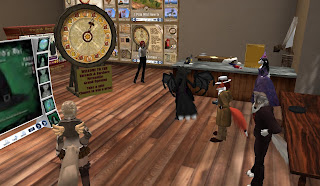 Asking her what else has she been working on, Cynthia answered, " Well I'm looking at expanding to airship parts, even including boilers like what the Cutlass club has." They also directed their attention to a "Wheel of Fortune," Cynthia saying, "The wheel of fortune is sold in the Golden Oriole vendor. But you will provide the cash prize so you have to grant money transfer." She had set the one in her shop set to giving out one or two Lindens. It was at this point a shopper entered the store, whom Cynthia invited to give a spin. She won a boxed avatar "ruler." Others continued to enter, "Congratulations on your new store, Miss Farshore!"

Cynthia again explained that the story's inventory would continue to grow. As for plans for expansion, "This store will be a humble little store in keeping with the neighbor hood. But I am looking at the concept of a skybox above to house large items like airship parts, like a storefront with a hidden warehouse. You can all see such that Shocky and I have made in the airship (Club) Cutlass. It has functioning aircraft elevators."

It was about this time Shockwave had to head out, so it was this time we parted ways. But with customers continuing to drop in, no doubt word has been getting around about the store.

So for quality items for a Victorian/Steampunk themed place, check out "Yareach and Farshore Mercantile."