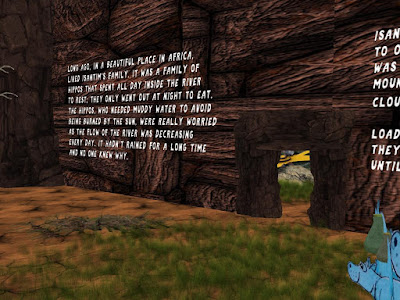 I had a chance to visit the opening of Xirana Oximoxi Exhibit at La Maison d’Aneli. It is curated by Aneli Abeyante. Xirana Oximoxi,known as Nuria Vives in real life, is a mixed media artist and also a children book illustrator. Her exhibit is a new book she had just written and will be available online. 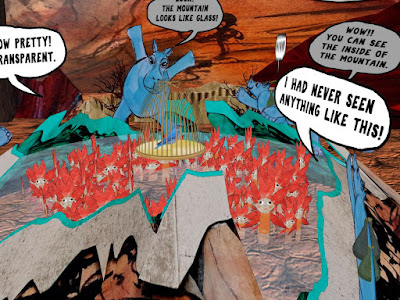 The book is “The Secret of the Crystal Mountain”. Its main character,a hippo named Isantim and his family go looking for water when it has not rained for a while. So, they set off on a journey to find out why. The journey takes them to different places and they encountered different characters that they have to deal with. It is a modern-day fable. 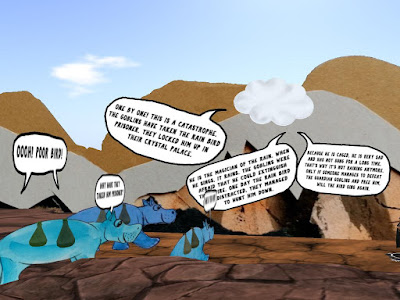 The exhibit is wonderfully set up.Xirana had taken advantage of Second Life environment.It is a three-dimensional setup of a two-dimensional book. The viewers would feel they are part of the book. Xirana’s mixed media skills are readily seen with the collaged walls. Floating texts and quote bubbles allowed the viewers to read as well as to travel with the 3-D cutouts of the hippos along with their journey. 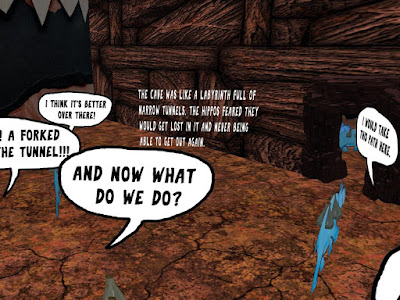 This is a one of kind exhibit of a children’s book that is not readily seen in real life. “The Secret of the Crystal Mountain" will be available at http://nuriavives.com/ as well as her other children’s books. 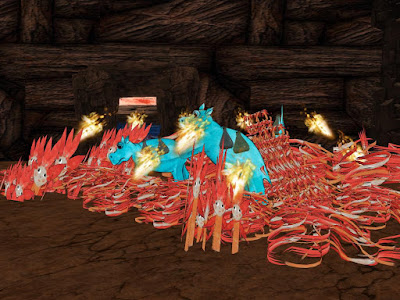 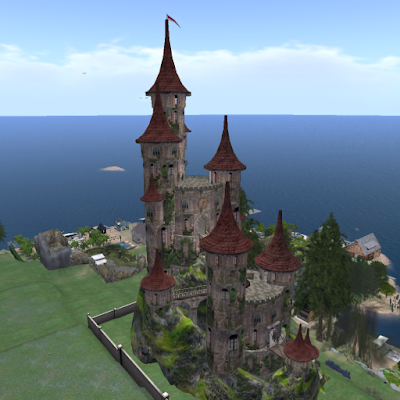 Last week several sims, organizations, and churches in Second Life set aside time to acknowledge Holy Week.  From Easter egg hunts to classical replications and symbolisms of the significance of the death, burial, and Resurrection of Christ.  Most of these events began on Palm Sunday and ended on Easter Sunday.  In an effort to grasp the energy and synergy across events, I traveled through Second Life (SL) observing several of these events which caught my attention. However, there was a particular event which personally and professionally sparked an immense interest; Harmony Castle at Blue Lagoon, Gorlen Bay. It was unique, tucked away, and unpretentious.  A first glance at the castle reminded me of the famous Burresheim Castle in Rhineland-Palatinate, Germany; except, its exterior, worn and pale, was very unassuming. 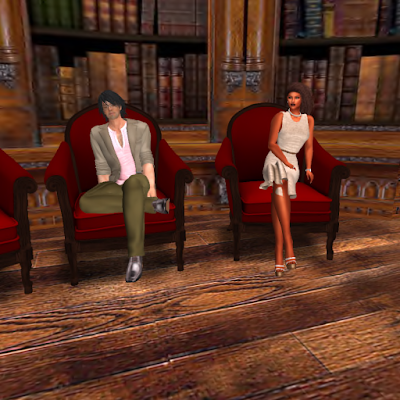 As I entered the immaculately designed interior, the ambiance of class and warmth greeted me.  The artistic storytelling of Easter story was very intriguing and provoked my curiosity.  As I stood wondering about the quaint interior, I suddenly heard footsteps, I  looked to my left and realized I had been joined by Mr. Colin Scientist, the brainchild behind the classical motif of the castle. We made acquaintance, and I announced the purpose for my visit. A few minutes later, I joined him in his library for an interview. 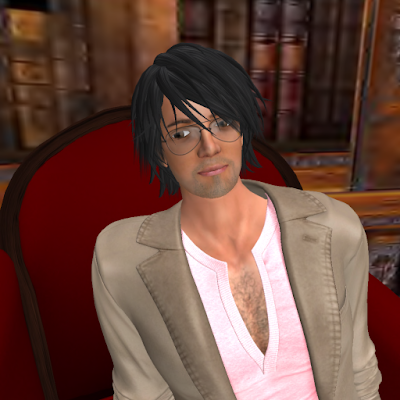 Colin Scientist has been in Second Life for eleven years.  He enjoyably spends his time organizing classical music events and has done so for the the past nine years at different venues and on his primary sim.  He curates art exhibitions in the castle to capture historical and religious events; such as Christmas and Easter. However, he particularly marks these two because of his Christianity.

This Easter was no different from prior years. Commencing Saturday 27 March through Easter, the sim streamed programs of Easter Music in Harmony Castle changing most  days. Mr. Colin Scientist coordinated a well-planned event, capturing the story of Easter replicating real art.  These paintings are on display in the Chapel in Harmony Castle and are available for purchase as well.  The art story begins with the famous piece by Michelangelo and extends to other known artists who capture other aspects of the Easter story.

THE TAKING OF CHRIST 1602 by Michelangelo Merisi da Caravaggio  - This painting (oil on canvas) is on  indefinite loan to the National Gallery of Ireland, Dublin, Ireland from the Jesuit Community, Leeson St., Dublin.   Caravaggio painted this extraordinary work for the Roman Marquis Ciriaco Mattei in 1602. Offering a new visual approach to the biblical story, Caravaggio placed the figures close to the picture plane and used a strong light-and-dark contrast, giving the scene an extraordinary sense of drama.  In this depiction, Judas has identified Christ with a kiss, as the temple guards move in to seize Him. The fleeing disciple in disarray on the left is St John the Evangelist. Only the moon lights the scene. 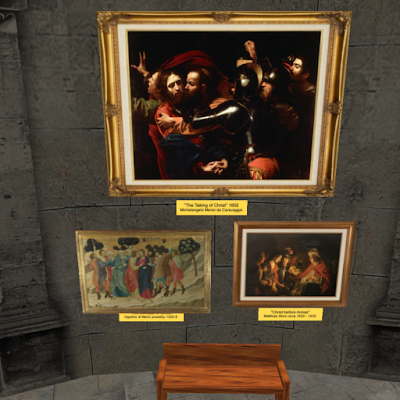 THE BETRAYAL OF CHRIST (possibly 1325 -8) by Ugolino di Nerio - Ugolino is documented in Siena in 1325 and 1327. The style of his work suggests that he was possibly trained, or at least heavily influenced, by Duccio, the most important Sienese artist of the 14th century. Ugolino's major work was the altarpiece for the church of Santa Croce in Florence.  This painting ( Egg tempera on poplar) is a panel from that altarpiece and is in the National Gallery, London.   It shows the moment, described in the Gospels, when Jesus Christ was arrested by Roman soldiers.

CHRIST BEFORE ANNAS" circa 1630 - 1635 by Matthias Storm - This painting (oil on canvas) is in University of Oxford - Campion Hall, Oxford, United Kingdom.  During the early 17th century, a number of Northern European artists were influenced by the innovative realism of the Italian proto-Baroque painter Caravaggio. Among these Caravaggesque painters was the Dutch artist Matthias Storm, who worked briefly in Rome and then in Naples. This picture shows Christ being questioned by Annas the father of the High Priest to whom he was taken first after his arrest.

CHRIST BEFORE CAIAPHAS circa 1630 - 1635 by Matthias Stom - This painting (oil on canvas) is in the Milwaukee Art Museum, Milwaukee, Wisconsin, USA.  The beautifully staged confrontation contrasts the theatrically gesturing priest with a serene Christ bathed in light and seeming to be an altogether different order of being from the coarse false witnesses behind him.

THE PROCESSION TO CALVARY (probably about 1505) by Ridolfo Ghirlandaio - This painting (Oil on canvas, transferred from wood) is in The National Gallery, London.  Ridolfo Ghirlandaio (1483 - 1561) was  a member of a family of artists, of whom his father, Domenico, was the most famous. Ridolfo accepted commissions for decorative work as well as for religious paintings and portraits.  It is thought that this was painted for the church of San Gallo, Florence.

THE CRUCIFIXION by Pietro Lorenzetti (Italian, Sienese, active 1320–44) - The Metropolitan Museum of Art, New York.  This exquisite picture, dating from the 1320s and of unusual dramatic intensity and characterization, belonged to a portable altarpiece of which one other panel is known: Christ before Pilate (Pinacoteca Vaticana, Vatican City). Originally there may have been four panels showing the Passion of Christ. 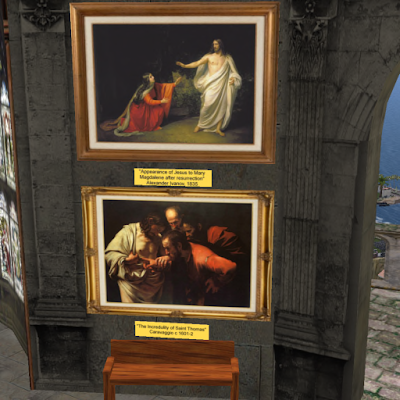 APPEARANCE OF JESUS TO MARY MAGDALENE AFTER RESURRECTION by Alexander Ivanov 1835 - This painting (oil on canvas is in The State Russian Museum, St Petersburg, Russia.  It depicts one of the Resurrection appearances of Christ in John's Gospel chapter 20: 14-17.

CARAVAGGIO's THE INCREDULITY OF SAINT THOMAS c 1601-2 - The Incredulity of Saint Thomas is a painting (oil on canvas) of the subject of the same name by the Italian Baroque master Caravaggio, c. 1601–1602. It is housed in the Sanssouci Picture Gallery, now a museum, in Potsdam, Germany.  Remaining paintings depicted subsequent events of Christ which including his suffering, death, burial, and resurrection. 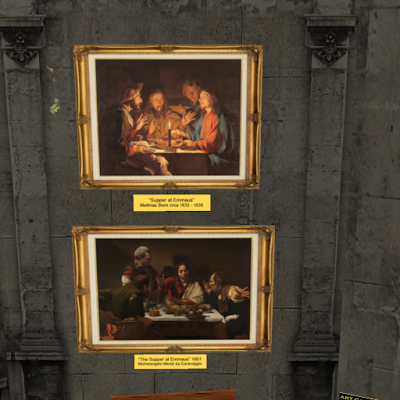 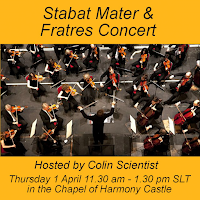 Mr. Scientist expressed that his sim draws people from all walks of life, from around the world; Britain, where he lives, the continent to include Germany, France, and Spain to name a few. Other known places are also the United States, Canada, Brazil Australia, and Poland. He believes Harmony Castle makes a global impact through the essence of art, music, and discourse.  He mentioned that there is a group of regulars  at sim events who independently organizes poetry event elsewhere.  Mr. Scientist discussed that while events are held during the week and throughout the year, he has had many more events during Holy Week with the exception of Saturday evening, which was a blend of classical and worship songs. 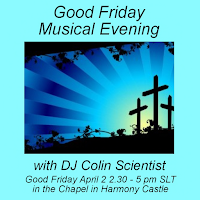 As the musical events come to a close over the weekend, the artwork will remain for visitors to walk through and view.  As I viewed the pieces, I imagined they were a re-creation of real artwork which transcended to Mr. Scientist's interest into SL.  They are vibrant and depict episodes of Jesus' journey to the cross and beyond.  Overall, he believes this is a place where people can feel welcome and relaxed.  Demands for events have heightened due to COVID-19 and members returning to SL, and he continues to respond to that need through doing what he loves to do - bringing art and music to art and music lovers!