North Pole And The "Christmas Express" at Caledon Downs 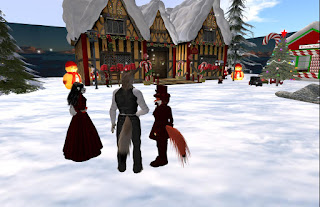 As the community of Caledon turns white with snow, the Caledon Downs sim is getting into the Christmas spirit. While some places are putting up lights and decorations on their trees, Cynthia Farshore's sim is taking Xmas to a whole new level, with trips to the North Pole.

I recently met with Cynthia at her new exhibit. "Hiya Bix, welcome to the North Pole," she greeted me, "as it is right now. Still in work, but can be opened now." She pointed out the buildings at the place where the reindeer were housed and the elves made the gifts. They were decorated with candy canes, holy, and lights, some still being put up by a couple of Santa's helpers. Cynthia's friend Shockwave Yareach cautioned, "All the elves are in bad temper though." I asked if that was because it was crunch time for making presents. Shocker responded, grinning, "they're 'elf'-absorbed." Cynthia chuckled, "Well, their elf-bred." 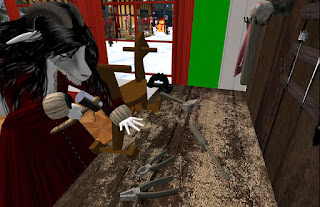 One building was the reindeer barn in which a number of the sleigh-pullers hung around at. In one shop, there was an elf working on toys at one table with red sacks of toys next to another, "Everyone there is elf-employed too." There was also a tool bench in which one could touch to get a tool, and help out a little him or herself, "supposed to be interactive." One building was the kitchen area, where one could pick up some sweet treats such as pudding, cake, or hot chocolate.

Cynthia told me while the place was basically ready and open, it wasn't truly complete as she would be adding a few more things, "Hope I can get together some gifts to grab around here, here in the shop and under the trees. ... it will be a work (in progress) a bit, as this is the first year to do this, just like Halloween was.  I had to hunt a lot to find just the right things so they work with each other. Really, I would put something in crate but later take it out as I found a better one, and so on."

But the most active part of Cynthia's build, and the one that required the most work, was the train that like the reindeer could fly, "Now to get up here there will be a Christmas Express train running from the ground to up here and back down. ... You know the movie 'Polar Express?' It's a bit of a knock off, 'Polar Express,' 'Christmas Express.' There will be a stop down on the ground in front of the airplane hangar. It will run up to where you see the Sunbeamer engine, then run back down. Here's the change: no tracks. It will fly." 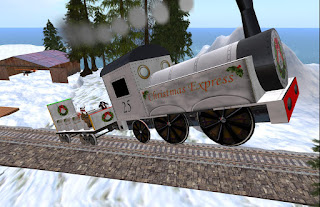 Cynthia would later have the train ready, sitting at a small station in front of her airport hangar. Candy canes would display when the next several trains would be available. She took me on a run. Sitting on the seats could be slightly tricky. As Cynthia stated, the train lifted up from it's position and went into the air. It would go up to the North Pole platform. On the way back down, it would make a stop at a Nativity scene, then Cynthia's Goblin Cave, then head on to the small station on the ground.

Other things I noticed at her sim, there was a large Christmas tree next to the fishing dock. There was also a skating pond next to the water. There was a skate giver that one could touch to get a pair. Once putting them on, one could skate around on the ice. 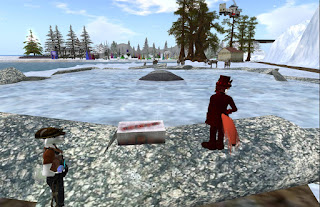 Besides a little more at Caledon Downs as time goes on, Cynthia told me to expect some decorating by her neighbors, "There will be more on other areas around here, like over on Star's land right next to me and Andrea's on my south side." She also mentioned Caledon was taking part in the "International Christmas Tree" contest.

All this time, Cynthia's Farshore Radio was playing a number of Christmas tunes from classics old and new to parodies, and others. Speaking of music, Cynthia let me know about a few Christmas parties at Caledon. Two would be at Oxbridge Village on Saturday the 15th, "I was told by Andrea she wants 1PM and 7PM, I will DJ both." The third event would be at Cynthia's Goblin Cave itself on Thursday December 13 from 6 to 8 PM.

During December, avatars have the opportunity to grab some unique souvenirs of the fascinating Tarot Garden on LEA17 before it closes.

The Tarot Garden on LEA17 is a virtual analog of Niki de Saint Phalle’s sculpture garden in real-life Tuscany, created by SecondHand Tutti. Since its opening back in August 2018 (covered by Newser reporter Gemma Cleanslate), a full program of events has been offered on the sim, from concerts to lectures and competitions. 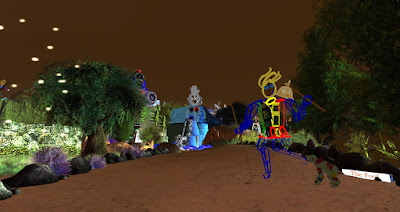 Finally, starting on the 1st of December, gifts can be collected from each of the 22 sculptures, representing the Major Arcana of the Tarot. Each gift is available for 24 hours, and it is a final opportunity to discover and explore the wonderful details of the garden. It's a hunt, if you will. All the gifts are wrapped and tied up with a bow, and relatively easy to find if you can locate the sculpture. There is also a Christmas gift from Tutti available throughout the event. 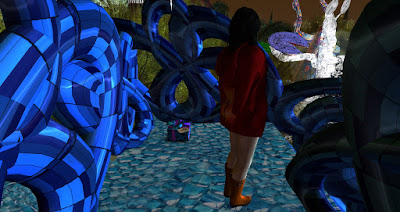 A map and visual guide is on display at the landing point but you will need to go on foot to find the location. Even having visited the sim a few times, it has shown me parts I had not noticed before and a little challenge is presented by the fact that some of the sculptures are hidden by others; for instance, the Chariot is inside the Empress. 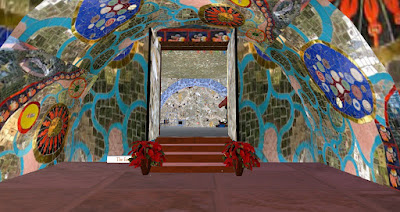 The gifts are original pieces by Tutti, each having some relation to the archetype they represent. Some are sculptures to rez on your land and others are avatars to wear. In sequence, the gift for each day in December is as follows:

I have been delighted with the chance to have some beautiful things to keep so that the memory of this remarkable project can keep on giving.

Klaus Bereznyak
Posted by Bixyl Shuftan at 6:00 AM No comments: