On Wednesday September 11, the new "Lab Gab" youtube program by Linden Lab featuring Xiola and Strawberry Linden had it's second episode, airing at 3PM SL time. The guest for this episode was Reed Linden, the Product Manager.

Xiola and Strawberry admitted to Reed, whom stood out in his tiny penguin avatar, that he had been asked to appear as their guest at the last minute. But he didn't mind, especially as he was number one, "Am I the first one? Oh wow! That feels amazing." Reed told that he had been with the lab for "a little less than nine years." He started in frontline support, "so some of your viewers may have talked to me before." After three years, he was moved to the engineering team. Soon after, Grumpity Linden decided he would make a good product manager "so here we are."

Reed described himself as having seen Second Life from a few different angles. Of who knows the most about SL, he felt it's the users. Among the Lindens, he thought it's the frontline support team.
"The path I've taken is uniquely responsible for ... I have a very user focused perspective. Of his favorite thing about working on SL? He answered, "It's got to be the community, hands down." He enjoys stories about how Second Life brings people together, "Every week we hear a story about people that for whatever reason weren't able to make connections in their real life, but on Second Life they can. ... every time I hear stories about that, it makes my heart grow."

He described much of his work as a focus on web projects. Of what he called the the web profile "experiment," he stated it would "go away. and we shall no longer speak of it." He stated there would be a return to "old school" viewer profiles and "update them completely." He stated there would soon be further. changes to Marketplace, but wouldn't give any estimates of when they would be in effect due to the team working on profiles, destination guide, and events in the last couple months. He did discuss the recent release of a Marketplace feature, Shop Managers, which "allows you as a store owner to nominate other residents to be managers for your store," different abilities and manage them "basically allows you to have assistants." One upcoming feature was the Gifts Received Page, "something that people have been asking for for I think, forever." There would also be purchase notifications, specifically for store owners. This feature would be one they could opt-in or not, as owners of larger stores could be spammed with notifications. They would also be overhauling Marketplace for mobile use.

Other things discussed included the Last Names issue, which was "still in the works." Land pricing was also discussed, Reed feeling further reductions anytime soon were unlikely. Someone on the Youtube live comments asked if it would be possible for the viewer to have pop-out panels. Reed answered he wasn't sure how feesable it was, but it was worth pursuing a JIRA on if it hadn't been already. In the Youtube comments feed, Inara Pey answered that a third-party viewer had tried it, "It is *not* easy to achieve." Reed also stated the Lab was considering a level above Premium that would come with more benefits.

The Linden homes were brought up, Reed saying, "the response to the new Linden Homes has been absolutely just overwhelming and wonderful." There was some talk about the Bellisserian community, with some residents roleplaying certain community roles down to someone collecting the trash.

Of the recently released Bakes on Mesh, Reed stated he was, "super encouraged from the engagement we've been getting from the community ... already seeing a lot of mesh jumping." He was hearing about products in development, or already out and "excited about the flexibility this is going to give our residents." He felt content that was sitting around in inventories unused for years would soon be able to find new life, "our hope is that this will allow people to start making much more lightweight content ... in terms of graphic resources that are required to display it." He was looking forward to having his penguin avatar updated with BoM.

When talking to new people in real life, his "icebreaker" is that he works for Linden Lab, "The stories you can tell about working here, particularly in some of the fields that are closer to the residents themselves are just as wonderful and amusing." Of his real-life hobbies, Reed enjoys "miniature painting," or painting D&D figures and diorama.

No date has been set yet for the next "Lab Gab." Episodes have been on Wednesdays "every two weeks or so." So the next may be on September 25 at soonest. 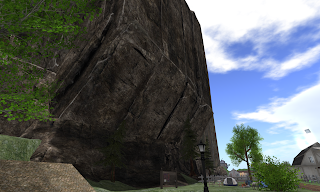 Climbing up the face of a cliff in real life is a little too adventuresome for the majority of most residents of Second Life. Many of those whom wouldn't be detered by the strenous exercise and the element of danger can't face the thought of looking down and seeing ground hundreds of feet below. But there is a place in Second Life you can give it a try. At the Nitida sim on the mainland, there's a cliff one can scale, or head back down. 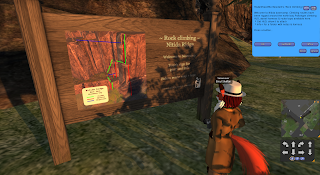 The cliff, Nitida Ridge, is at the Nitida sim on the mainland continent of Heterocera. At the bottom of the cliff is the base camp. The table of supplies, rope and gear, map, binoculars, radio, etc is basically a reminder of what real rock climbers would be needing. What you need will be at the sign. Click on it to get a notecard and picture of the routes up the cliff and the descents (by rope), a harness clip that attaches to your belt, called an abseil harness, and the climbing HUD. The pop-up that appears after you click the sign will ask if you want it to attach. It's default position is the lower right of your viewer. The HUD is red when disabled, blue when ready, and green when activated and working. You can also adjust your speed to climb faster or slower, or your avatar to be slightly closer or further away from the rock. The latter can help you avoid looking like your arm is going into the rock or climbing through air. 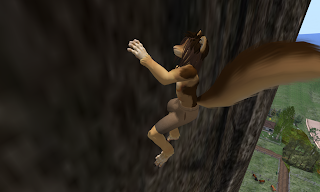 The cliff before you is about 100 meters high. While walking that distance horizontally is no problem, climbing here is something else. It's suggested that you check the routes on the picture provided, though not necessary as I was able to go up a path that was labeled for abseiling down, just slowly. Climbing is best up vertical parts of the cliff. If you encounter an obstacle such as an overhanging section of rock, as you can't climb upside down you'll have to go sideways until you can go around it. 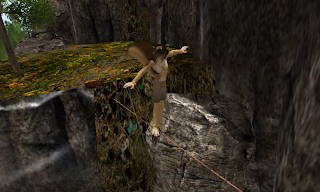 The rock climbing system and the cliff area were created by Yasmin (YouAintSeenMe Resident), with some sections originally made by Funatik Resident. The notecard stated there were a few other cliff areas the HUD is good for climbing, but this is the tallest one.