The Playa at Deep Hole lit up again last weekend, bringing warming sparks of creativity to our virtual world and proving there are still great artists out there doing amazing things with prims and particles. 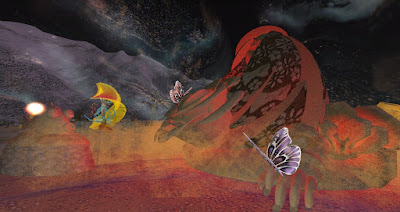 The theme for this year's Winter Burn was 'Seasonal Perceptions'. Builders' imaginations were challenged by the brief:

Our perceptions are a driving force in how we interact with the world around us. But imagination is also a strong influencer. Given all that, how would you perceive the seasons? Would you reflect the environment around you... or imagine something completely off the wall and different? Show us your "Seasonal Perceptions!"

The burn kicked off with a weekend full of performances starting from the moment the lamplighters walked onto the Playa early Friday evening, and continuing through Sunday night. Events included a fashion show by the Burn2Fashionistas, a collective of non-professional virtual models lead by Vickie Maidstone. The builds are still up this week to be explored and enjoyed. 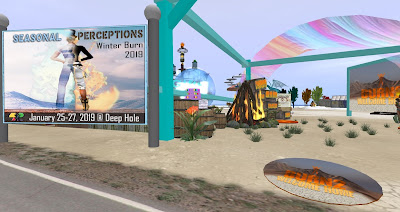 Arriving at Deep Hole, visitors could choose to go left towards Summer or right towards Winter and to follow a wide circle around the builds showing the responses of some twenty different artists to the theme. Though much smaller than the main Burn, and only occupying one sim, a good hour or two could agreeably be passed delving into the builds. Whether made from scratch or by clever use of prefabricated components, the builds displayed a generous array of imaginative interpretations. 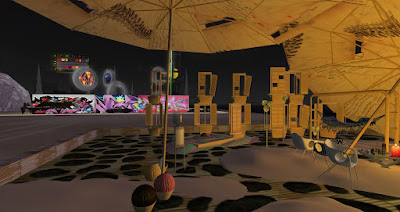 Providing a walk through the seasons of the year, there was a good balance of 'warm' and 'cold' from installations like Serra Quendra's surreal and summery beach hangout through to the mythological magic of Andrea Jones' ice-bound viking longship and the snow globe by ღ Dreams ღ. 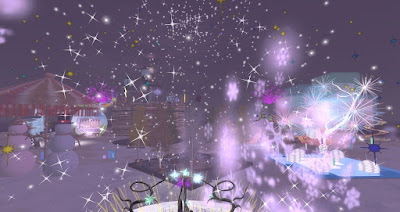 Other installations sought to capture the experience of multiple seasons. 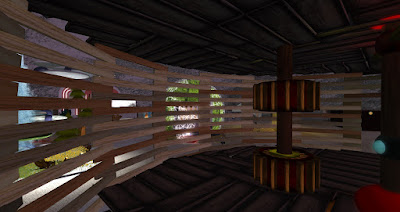 At the core of the sim, an interactive Weather Machine, created by iSkye Silverweb dominated the atmospheric conditions. Many of the builds featured interactive elements, including Suzie's melting snowmen and rideable snow bunnies and Leroy Horten's Sun Man popping out from the ground. 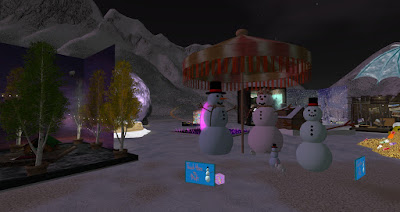 For added interest, visitors could participate in a scavenger hunt to find 10 prizes dotted about the installations. The variety of responses to the theme was impressive. Some, such as Melodie Heart and Erico Lecker's Wonderful World and Marcel Mosswood's Back Ton nature installations, not surprisingly sounded a warning about global warming. 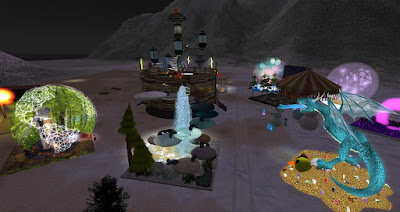 True to form, Burn2 has provided us with yet another memorable feast of radical self expression and been a beacon of grassroots virtual artistry. Well done, everybody! 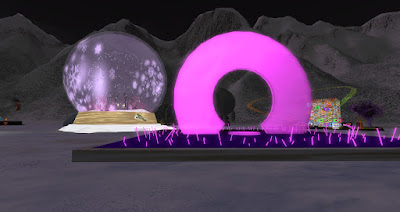 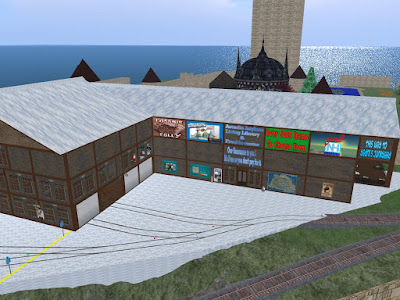 One of the most fascinating sites to visit in Second Life , in my opinion, is Arcadia Asylum Living Library.  Prof. Grey (BrianL61 Landar) built and owns this place . Originally it held the works of Arcadia, Aley (the same). . Prof . Grey has been updating it to add all the Yadni Junkyard vendors to it along with items made by Moard Ling , some of his own creations  and a few others early  creators.. Yadni’s Junkyard was such a fun place to visit in Second Life for years. He has closed it and has retreated to real-life to further his art projects. However he left all his junk behind with love. 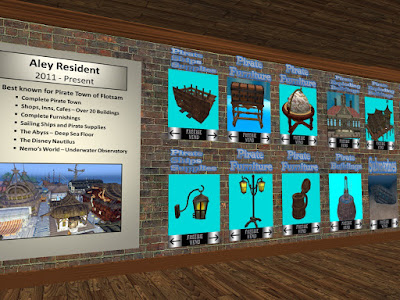 Arcadia Asylum built so many fascinating installations during her many lives in Second Life. She is gone now and sorely missed. I met her several times at her builds underwater, at her pirate town and in LEA . She was lots of fun to visit. So many of her pieces I see every where in SL to this day. Her many avatars are great to play with too. 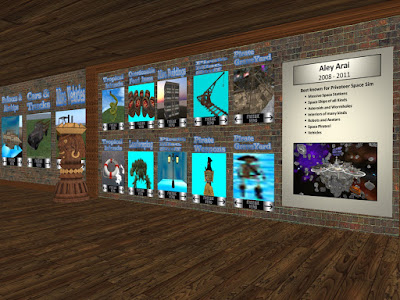 I call this library a museum because it holds so much of the early days of  Second Life. Prims that made everything before mesh was even thought of. Every item you see in the vendors there is free! Not only is it free it is full permission. One can take anything there apart and create a  new item from the parts. The only thing one cannot do is sell any item. I have seen many of the items used as decorations in regions, clubs, homes across the grid. Some of Yadni’s buildings are the basis of some shops or decor outside in town centers.

Prof. Grey says,”My goal is to help preserve the works of SL's Great Creators and Collectors like, Aley.Resident,  Arcadia Asylum,  YadNi Monde, Moard Lin and help to distribute them for all to enjoy.I ask nothing in return, if you'd like to help Please let me know.If you would like to have/start a library of your own, Please drop Me a notecard.” 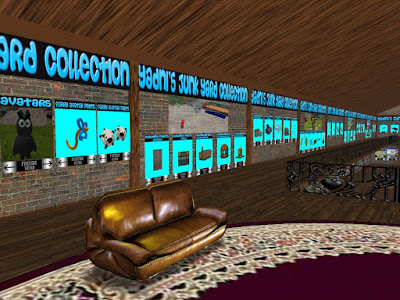 I asked Prof Grey how many items he thought he had there and his answer was, “we are at least 8000+ items now i started taking a count but it will be a while til i can have a total, i figure safely between 8 & 10 thousand items total.” He is also looking at gathering more Greenies items. Go enjoy looking through the vendors for anything you may want.

There are other libraries across the grid helping him make the items available and you can pick up a list of them at the library. Some of the actual exhibits are still available to visit in Second Life and you can find out about them there too.

Gemma Cleanslate
Posted by Bixyl Shuftan at 8:00 AM No comments: 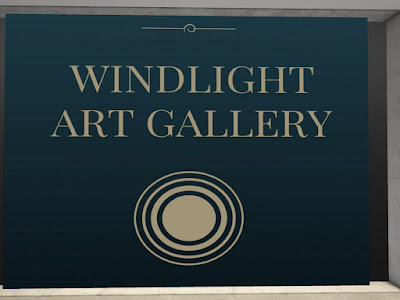 I have been outside so much in the cold and wintery air exploring winter and holiday places I felt the need to take a break and go relish some art inside a gallery. I had not been over to the Windlight Gallery for a while and there was revamping going on so I decided to check it out. 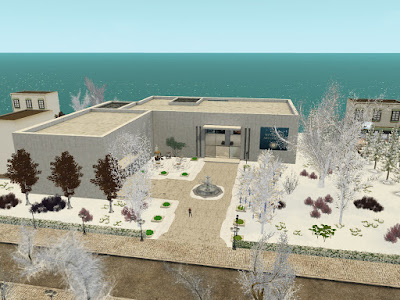 The Gallery just reopened on Jan 6 with artists for the month. 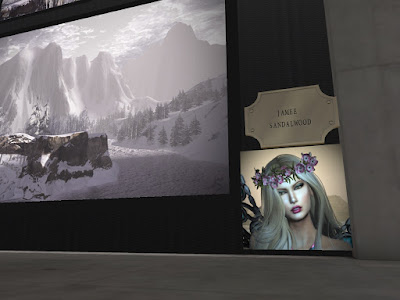 I really like the look of the new gallery. Each artist has a wall space with a lovely name placard and a picture of the artist below that give a notecard about the artist. This is so helpful to people viewing the pieces who might like to contact the artist for more information. I always like to find one when I visit galleries around the grid. There are an eclectic selection on the two floors of the gallery of rl and sl art . It is a good place to view the many genres artists have in their  creative passions.  It is also a wonderful place to purchase works that you like for your homes. There is always something here for anyone’s taste. Outside the gallery on the road you will find small galleries of artists that are mostly permanent to visit. 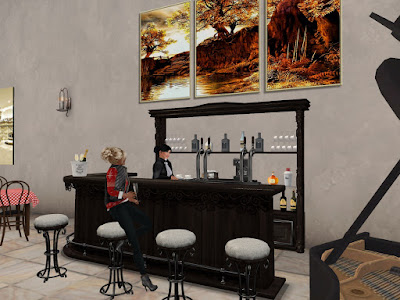 I always take a walk around and then stop off at the  Ristorante Ivanna. This is a charming dining site where anyone can visit and enjoy your choice off an extensive menu. It makes for a great dining place for friends or lovers. I believe it can be booked for parties . The bar tender is always there to help and listen if you need to talk. 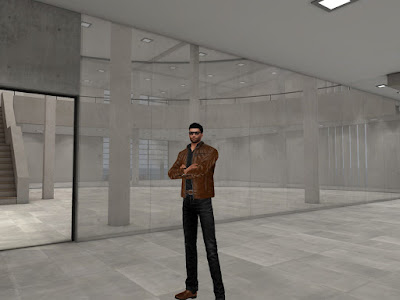 I ran into the owner , John Brianna (johannes1977 Resident), working on the revamp of the Black and White Gallery, The Edge, while I was there . The Edge  will be reopening  Sunday the 20th of January. There will be a big reopening party as usual. I am sorry to say I missed the last weekend one for the Windlight.  I always look forward to the new art that appears here every month. A list of the currant artists can be found on the Kultivate Magazine website :  https://kultivatemagazine.com/artists/ 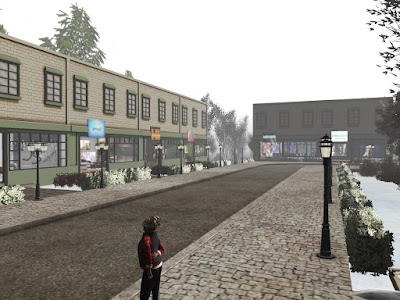 This is the entrance to the gallery. 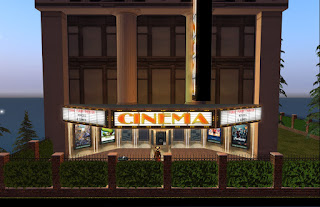 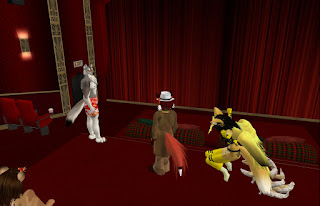 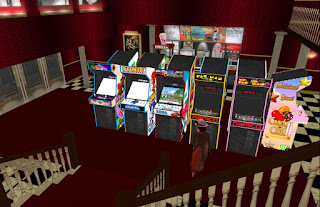 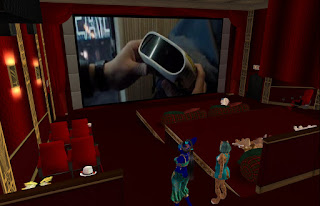 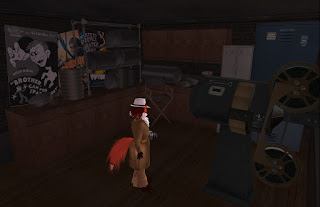