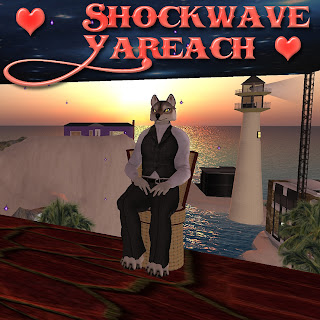 Do you know Shockwave Yareach, or Shocky, as his friends call him? Recently, he became the object of some controversy when his suggestion for fixing problems with SL land ownership were highlighted by Hamlet Au, and tons of comments ensued. (http://nwn.blogs.com/nwn/2013/01/second-life-land-solution.html ) This hunky wolf has been in Second Life for many years, and has become renowned for his scripting skills and diabolical mazes. I can understand confounding everyone on Halloween, but Shocky doesn’t even let up for Valentine’s Day. I was informed that the maze was up the other night, and figured I would go take a look.

First things first, I am not a gamer. My skills at Second Life took ages to evolve, and the thought of a maze—even one with such a loving theme—filled me with fear. I was not disappointed, nor will you be, if you take a trip to Shocky’s Valentine Maze at: http://maps.secondlife.com/secondlife/Sunweaver%20Space/191/136/61

When you land at the teleport point you will be greeted by a riot of red roses, that make up the walls of the maze. Spend some time inside and you will become completely disoriented, as the walls pass around you, red and seemingly unending. However, the first thing you need to do is grab a HUD from the box to the left of the entrance. After you apply that to your screen display you will note that is ready to be filled with gems that represent the qualities of love: Strenth, Adoration, Faith, Wisdom, Respect, Patience, and Dedication. Aaaah, but how does one find these gems? Of course, the answer to that lies within the maze, and the wicked candy hearts that are traveling along through the maze, each heart corresponding to a colored gem. The goal is to find all seven hearts and touch them as you do. This will light up the gem on your HUD. One of the sophisticated features provided by our fearless furry is that the gems stay on the HUD, even if you log or teleport elsewhere. This means that you can finish the maze in more than one visit without any penalty. Sounds easy? Well, Shocky says: “Love sounds easy, too. at first (grin)."

This is such a perfect activity for couples. Run through the maze, search for hearts, and discuss the qualities of love, as identified by Shockwave. There are no prizes beyond the joy of completing the gems on the HUD, but who cares. Love is the greatest gift. 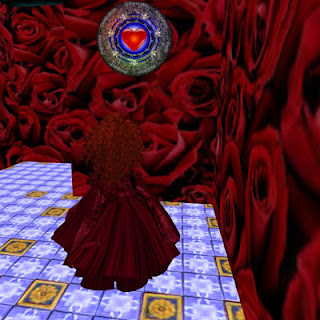 I caught up with Shocky as I was putting the finishing touches on this article and we spoke about his mazes and his love for Second Life. I had forgotten the famous Easter Maze in which you had to shoot the Alien Eggs before they killed you. Shockwave plans to run that again this Easter. “It’s a good excuse to shoot up the place with your favorite gun,” he adds.

I asked him what he liked about Second Life, and he replied: “Second Life is to me a graphical version of a Muck— a user created world where you can do anything, be anything, and push away all the limitations of distance. (http://en.wikifur.com/wiki/MUCK ) “My friends and my group keep me here.  I love these loons and I enjoy building fun stuff.  I build in Real Life, too, so the LEGO aspect is just as important to me as the socialization.  But honestly, it's my friends that keep me here.”

The geeks amongst you will understand this next part, even though I don’t. Shocky’s mazes are computer generated, and when he had a full sim to work with: “My gear can make a maze that covers an entire sim. You put a prim down at the Southeast corner of the sim, drop in a text file, and it rezzes the walls as needed. I could change it hourly if I wanted.  It's very fast.”

Thanks, Shocky, for your genius, and for what I know of you as a gentleman wolf and fine builder and scripter. Go visit the maze, and maybe you will be lucky enough to run into Shocky. Say hello for me!

DrFran Babcock
Posted by Bixyl Shuftan at 6:00 AM No comments: 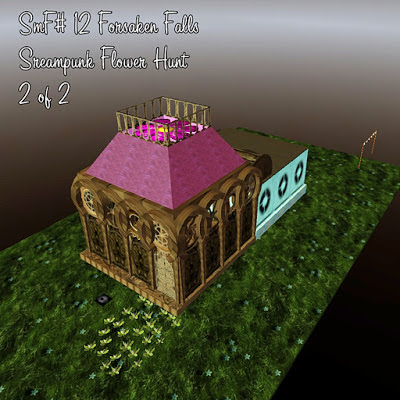 Admit it, you love hunts. For me, a hunt is a way to chill out from a hard day in the non-digital world, or when things get drama-laden here. Which never happens, right? 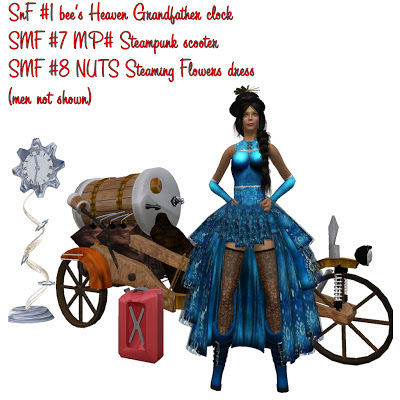 Well, if you are like me, the lure of freebies, meeting people, and finding just that special treasure keep me searching. The Peace on Earth Hunt, over for now, is my favorite, but the name of this hunt grabbed me. I love Steampunk, and I am a hippie. What could go wrong? 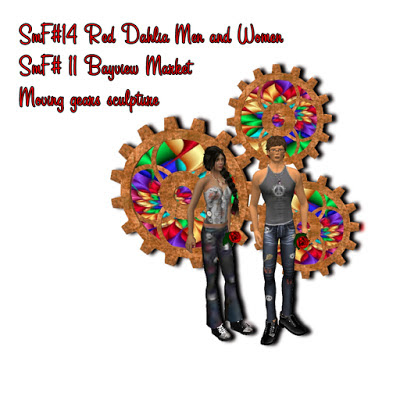 DrFran was a little busy with real news, so she sent her alt: Mai Waffle out to do the hunting. Below are the things she found. The hunt item you are looking for is a gear that is pink. 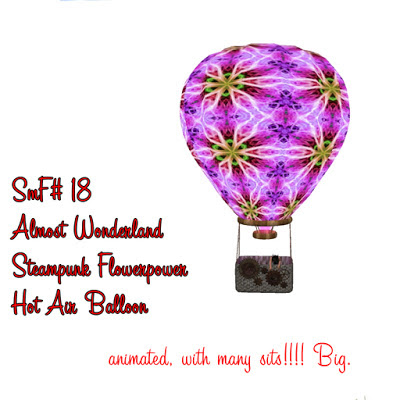 There are 25 items in the grid-wide hunt, and Mai was able to find all but one. She enlisted the help of Oakesy Ogg to help her show off the items that had both male and female items. 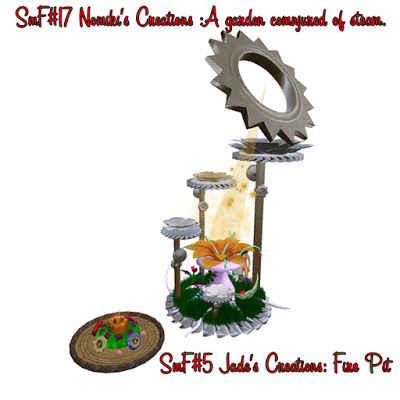 IMPORTANT: The Newser is usually not on the Hunt trail. If you are interested in seeing more hunt reports, please let Editor Bixyl Shuftan know. Thanks. 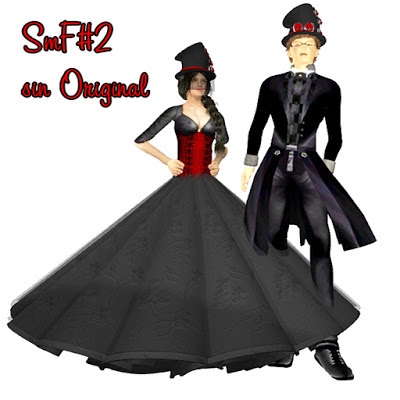 The Steampunk Meets Flowerpower Hunt runs from January 1st – January 31st. The blog for the hunt, with hints and teleports is here:
http://insidethepeapod.tumblr.com/post/39071952659/steam-punk-meets-flower-power-hunt-212

Editor's note, Luminous Designs has informed the Newser it will soon be joining the  hunt.
Posted by Bixyl Shuftan at 6:00 AM No comments:

In Steelhead, there are a number of personalities, such as the Sasquatch, Baron Wulfenbach, and everyone's favorite lycan, Sherif Fuzzball Ortega. Then there's Lumina Elvehjem, better known by her friends as Lumi. Popular among her friends, when I asked people around Steelhead who deserved an interview, it was suggested I talk to her. So I contacted Lumi, and we agreed to talk about her store at Steelhead, "Luminous Designs." 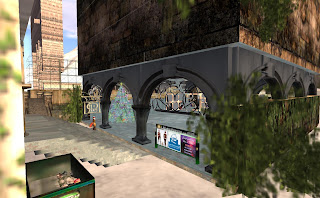 Lumi has been in business for about four years. First logging into Second Life in June 2006, "I started with furniture at 6 months, I got into photoshop at around two years. and opened a clothing line around that time." The store offers, "mostly womens'  clothing, but I have several mens' things too, in a few generes. Among her items, "historically accurate, steam/Victorian-inspired, boudoir (lingere / bedroom), and whimsical. And some stuff I make 'cause I want to."

Among her top selling items are the lingere sets, "I have been thanked by boyfriends for some of them (smiles)." But the best selling one, "my most popular item of all time (was) a total surprise to me, it's my Greek/Roman shoes." These "gladiator style" shoes were pretty simple fitting men and women equally well, a single prim sole and a "wrap around the legs." While Steelhead has had some Greco/Roman events, the reason she made the shoe, "was actually a request from a customer." And once in the store, people began buying it again and again. 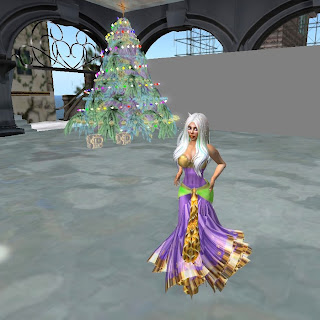 Another top seller is her Sheerly Sari, available in a number of colors and about 500 Lindens, "I have to say, this is the thing I'm most proud of. I nailed it. That is a classic historically correct bit of lush gorgeousness. No sculpts, and it's pre-mesh."

The store itself was fairly large, with several floors, "First floor is for newer stuff. I have some things I need to put out for New Years. Next floor up is Oriental. Third floor is Steam/Victoriana, loosely interpreted. Fourth floor is boudoir, and the whimsical stuff ends up there too. Top floor is ancients. Asking her further about the whimsical items, Lumi answered, "Fairy  stuff, skimpy lil miss nothing outfits." I then asked what was her whimsical item that got the most laughs. Lumi thought for a moment, "Hmmmm, toss-up between the shower bubbles and the sparkle suit." Camming up, a picture of the wearable shower bubbles wasn't exactly safe for a family newspaper.

Lumi has more than one store in Steelhead. Stopping by one of her "annex store" locations, there were a few chuckles at the place such as a "Beware of the neko" sign, and a can of "anti-drama spray." More examples of her humor. 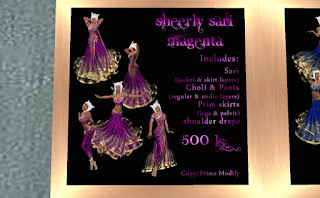 So what does Lumi do when not minding the stores or making items? "I hang out with the Steelheaders. I often lead several of them in Sync dancing where you match animations to the tunes that are playing in real time." Her favorite regular event is the Steelhead Friday Night Dance, "I sync-dance everyone at that. (smiles)"

As for her title of "Steelhead Ambassador," Lumi answered, "It's something Lunar thought up. We represent Steelhead, and help locals with various things, invite people." She's happy to have her store here, even though. "I'm not a 'steampunk' store. It's not genere-correct, but I'm not going anywhere else."

One can find information on some of Lumi's items at her blog on: http://lumisbloggiebits.blogspot.com/

So whether to get a Victorian-era outfit to fit in better at Steelhead, or a little something for the spouse, or something just plain funny, come by Luminous Designs. 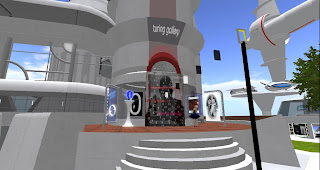 The mezmerizing chat of "one one one zero zero one one" greeted me as the door as I entered the Turing Gallery in Extropia. Gracie Kendal is the curator of the Gallery and asked Oberon Ommura to do an exhibit there. The mission of the gallery,”Turing Gallery exhibits work that is futuristic + conceptual in nature. We adhere to the Extropian philosophy of creating an environment of near future and science fiction ideals.“ 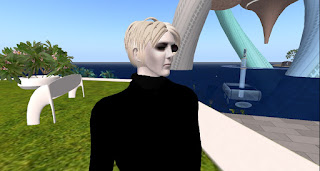 The Turing exhibit that Oberon has created is a tribute to Alan Turing a very early pioneer in computer sciences. IIn Oberon’s words, ”Alan Turing had a hand in creating modern information theory, in no small part with his thought problem called the' Turing Machine.' One aspect of the Turing Machine is that it is potentially 'infinite,' in the sense that it can (theoretically) become any computer and solve any problem, given adequate input. This installation is an artist’s riff on that notion – infinite input, infinite output – even though there’s no computing happening here!” 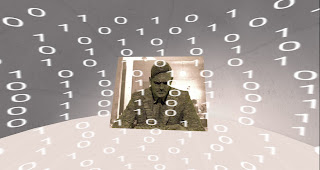 His picture stands outside and again on the top floor of the gallery there is an image of him also, surrounded by the 1100110‘s. There is a constant flow of data going on from all directions and filling the halls of the gallery from the lower floor to the upper floor. A throng of artists and friends attended the opening and were amazed at the exhibit tho one said to me that Oberon loves moving prims and scripts and uses all he can.

In reference to my comment that it is difficult to describe the art in words Oberon said to read Quan Lavendar ‘s travelogue which I had already done. http://quanlavender.blogspot.com/2013/01/an-opening-and-festival-start-today.html . Oberon said,  she hit the nail on the head though about my style sort of giving permission to the viewer to respond very personally,” and I agree.