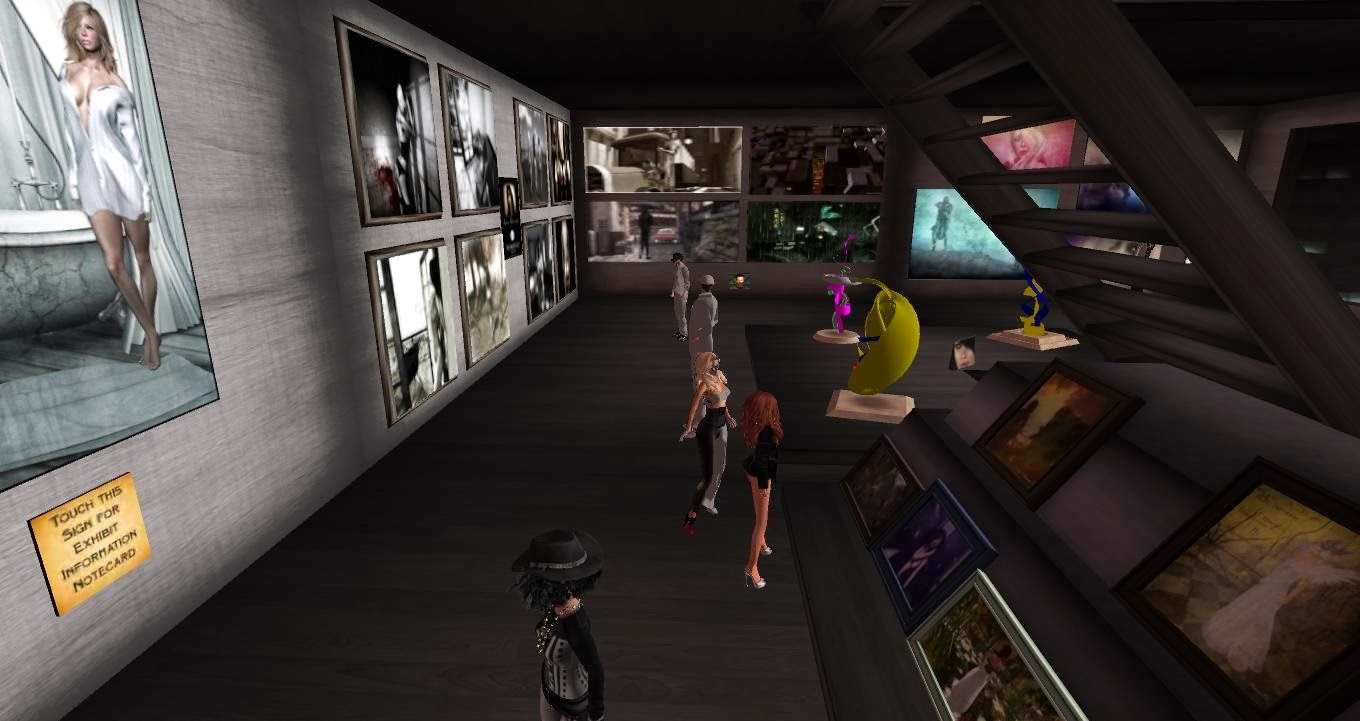 I was happy  to be invited to the Opening to Neo Machina Gallery in Alterego on Saturday afternoon. I have not been to many galleries lately... too busy.Three of my friends have exhibits there among the sixteen exhibitors.The opening was well attended and the DJ Mikel Shilov provided music that enhanced the mood at the opening party.  The Gallery is owned and curated by Sarrah Docherty and cocurator is  Cenedra (cenedra.ashbourne), who is also showing her fairy like images as part of the  exhibit. The exhibitors will be  resident artists. However Cenedra told me, “we plan to make special themed exhibitons , plan on guest artists , so that there are not always the same pics the entire time.” There are several brand new artists on exhibit which is always nice to see. 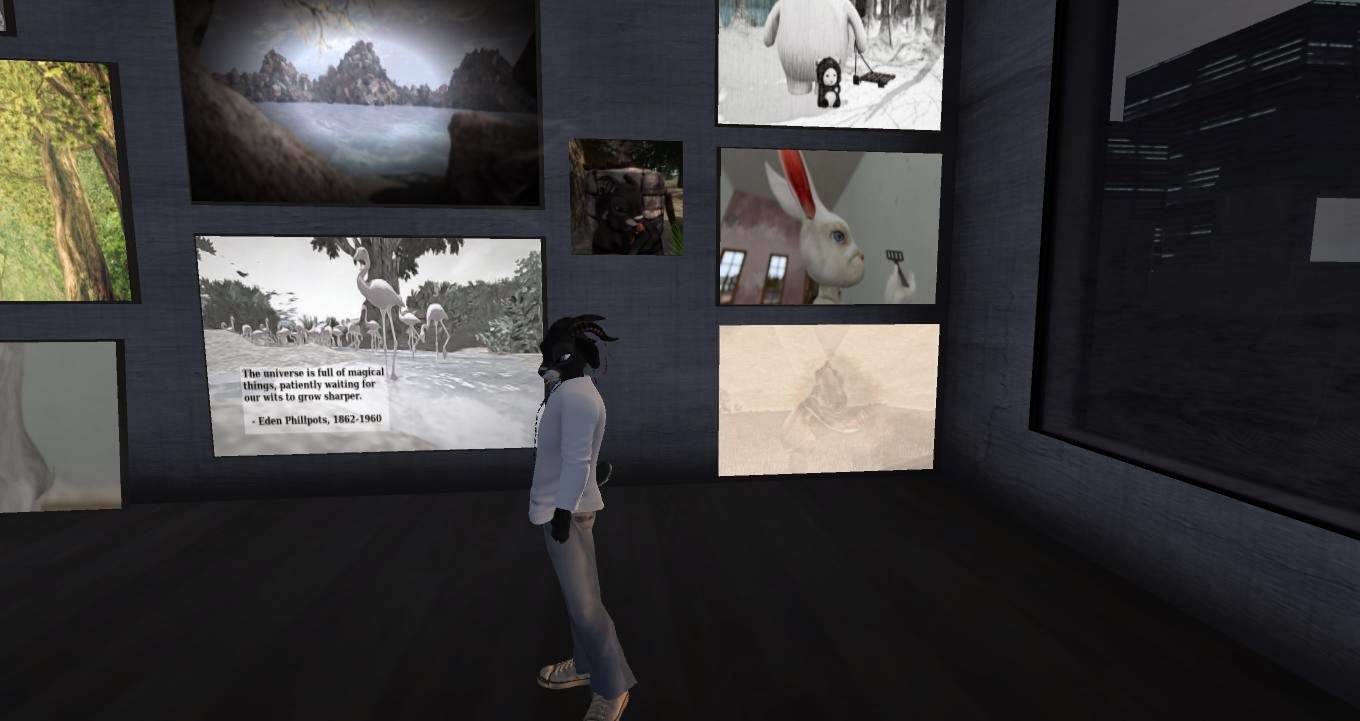 I asked Sarrah why she opened the gallery. Her response was, ”Really it's the rebirth of another Gallery that closed last year due to several issues, this time I'm running it all in-house so to say, Its main goal has always been to respect all SL artists and move away from judging one style, genre or skill level to be "better" than the other, and just focus on the creative process and having a good mixture.”  And the collection is very eclectic.There are Photography artists, Sculpt artists, and a story artist. Each artist has a notecard to pick up by their area.  I spoke wih Evola Courtois , another friend and fishing buddy, who has exhibited a few times before and is happy to be a resident artist here. I saw three exquisite pieces  by my friend, Neeks Karu, who does wonderful sculpts that are alive. I enjoyed both floors of stunning photography, sculpts and reading the story art by Alanna Oh. 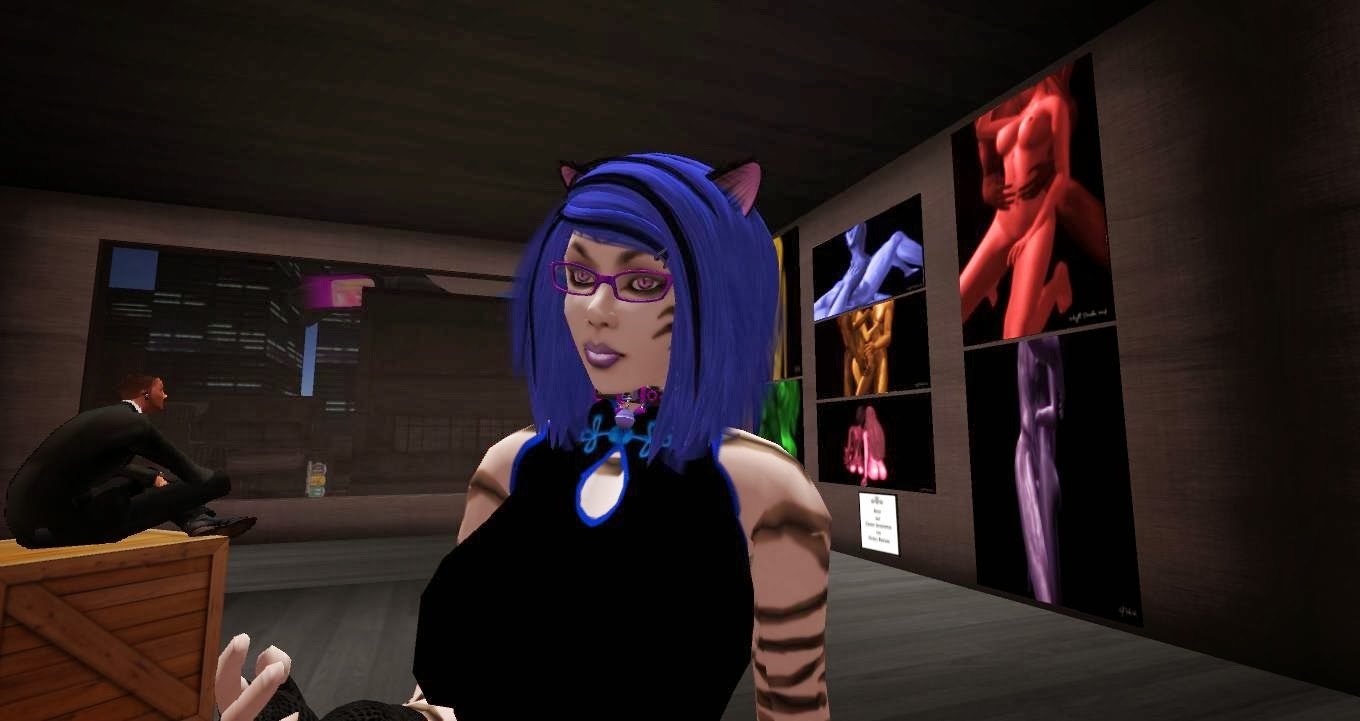 I suggest you put this on your list of new galleries and do not miss it! Enter here and work your way around and down and  you take the elevaor to the ground floor and outside  I recommend you have an umbrella handy . http://maps.secondlife.com/secondlife/ALTEREGO/13/55/3526

LEA13 – The Work of Xineohp Guisse

I was amazed and entranced from the first day I came into Second Life™. I have never lost my enthusiasm for this virtual world, and its ability to continue to surprise and delight. The thing I like to do most after socializing with friends and creating content is to explore in hopes of finding magic. Thus it was, that I stumbled upon Xineohp Guisse’s ethereal and wonderful build. 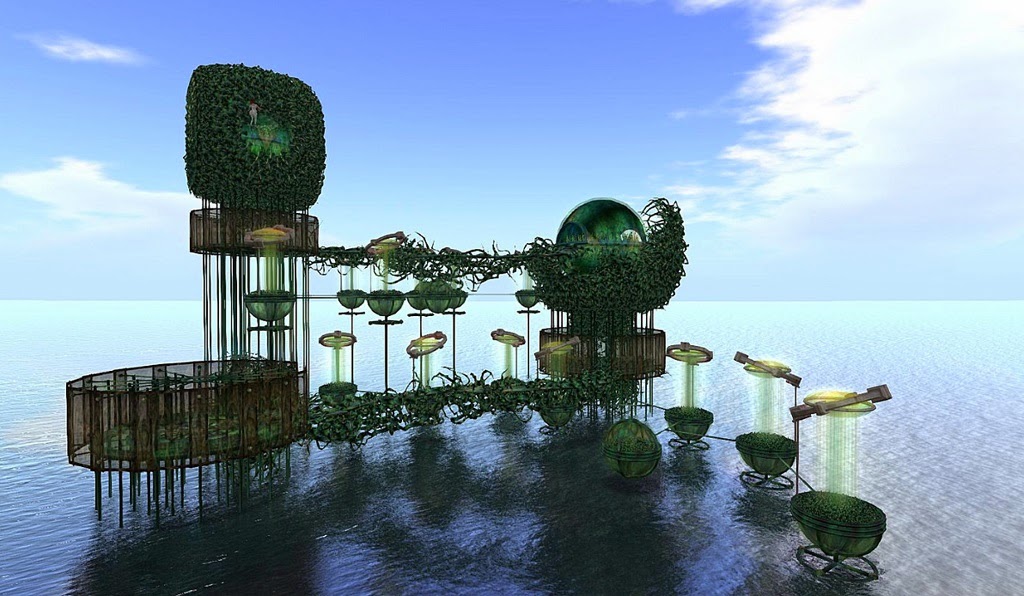 I was with my friend Brick, exploring the soon-to-be-opened Linden Endowment for the Arts (LEA) builds. He had shown me the gigantic Dragon Curves fractal installation by Mac Kanashimi on LEA 26, covered by Inara Pey here: http://modemworld.wordpress.com/2014/02/02/enter-the-dragon-curves/ . After spending some time there, I began to sim hop, and upon landing on LEA13 I stopped, drew my camera back and smiled.
Whenever I find something I like—clothing, furniture, landscaping, hair—I immediately inspect it to see who is responsible, and the creator of this green and intricate sim was Xineohp Guisse. Even better, he showed up on the sim as a green dot. Thinking of nothing more than complimenting him on his work, I IMed him, and said: I LOVE, LOVE, LOVE this build! Thus began an hour long exploration and visit with one of the LEA’s artists. 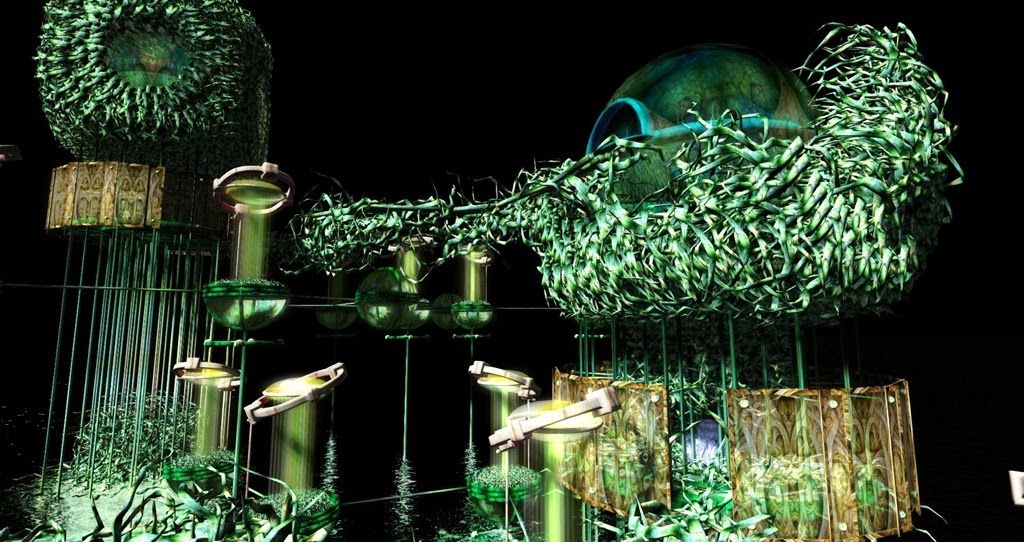 Xineohp was modest: “I’m still building, sorry about the mess (smile),” he replied. He is also a great jokester. After I told him I thought the build was gorgeous, and hardly a mess, he responded with what I later realized was an out and out pun: “Nope. Not mess; old-school build (smile)," by which he meant that he had used not one sculpt or mesh object, but used prims for the entire construction!
The build is in two folds, and contains an interactive piece. Xineohp, a cello player, used cello notes that sound as you collide with the flexi glass on many parts of the build. “So you can make your own music,” kids Xineohp. 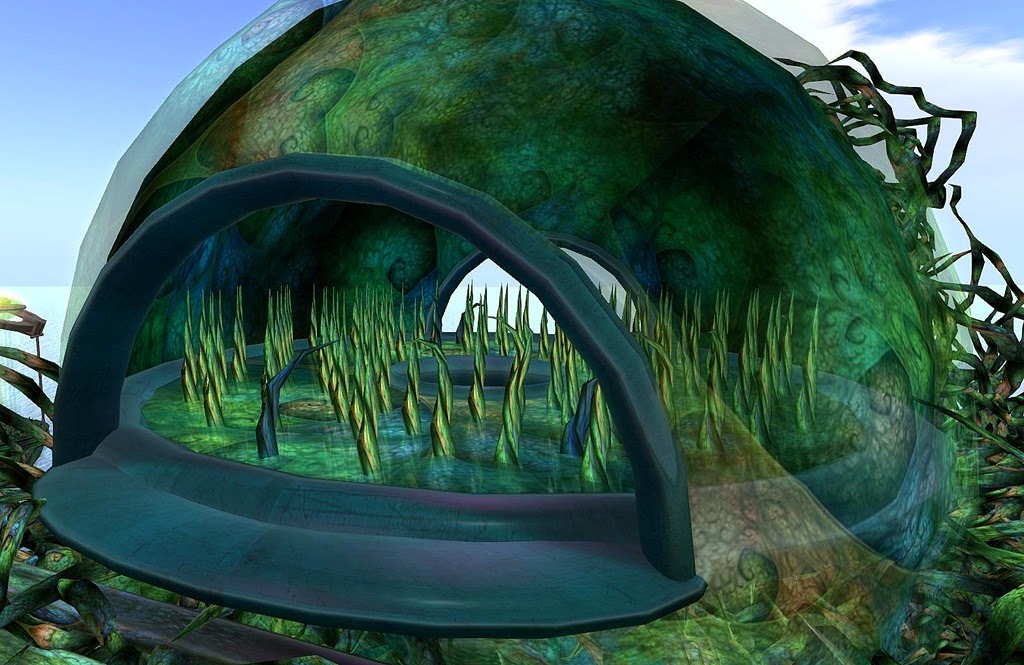 On the main tower, there are two creatures, that to me looked acquatic. They moved around on the grass creating tones as well, and because they are random in their movements, the sounds evolve and change. When two notes are struck, it creates a third resounding note. I walked around and loved the experience of the sounds, and the cello notes were just perfect with the swaying grass. Xineohp was working on a pod chair when I finally joined him on one of the towers. He asked me to test it out, and I ended up with my camera trained on one of the two wriggly creatures. The two creatures on the main towers are named: Connie and Blyde (a spoonerism reference my older readers may get).
The LEA grant runs for five months, and Xineohp plans to do a different chapter of a story each month, starting with the current build: The Lost Garden of Sundarya. Chapter Two will be under water, and tell the story of Connie and Blyde, focusing on how creatures come into being, and how they end up being a symbiotic musical link. Chapter Three will take you to the middle sky and deal with wind and birds, and flying “stuff.” Chapter Four will go higher, and be in the spirit world, but Chapter Five will be a secret. 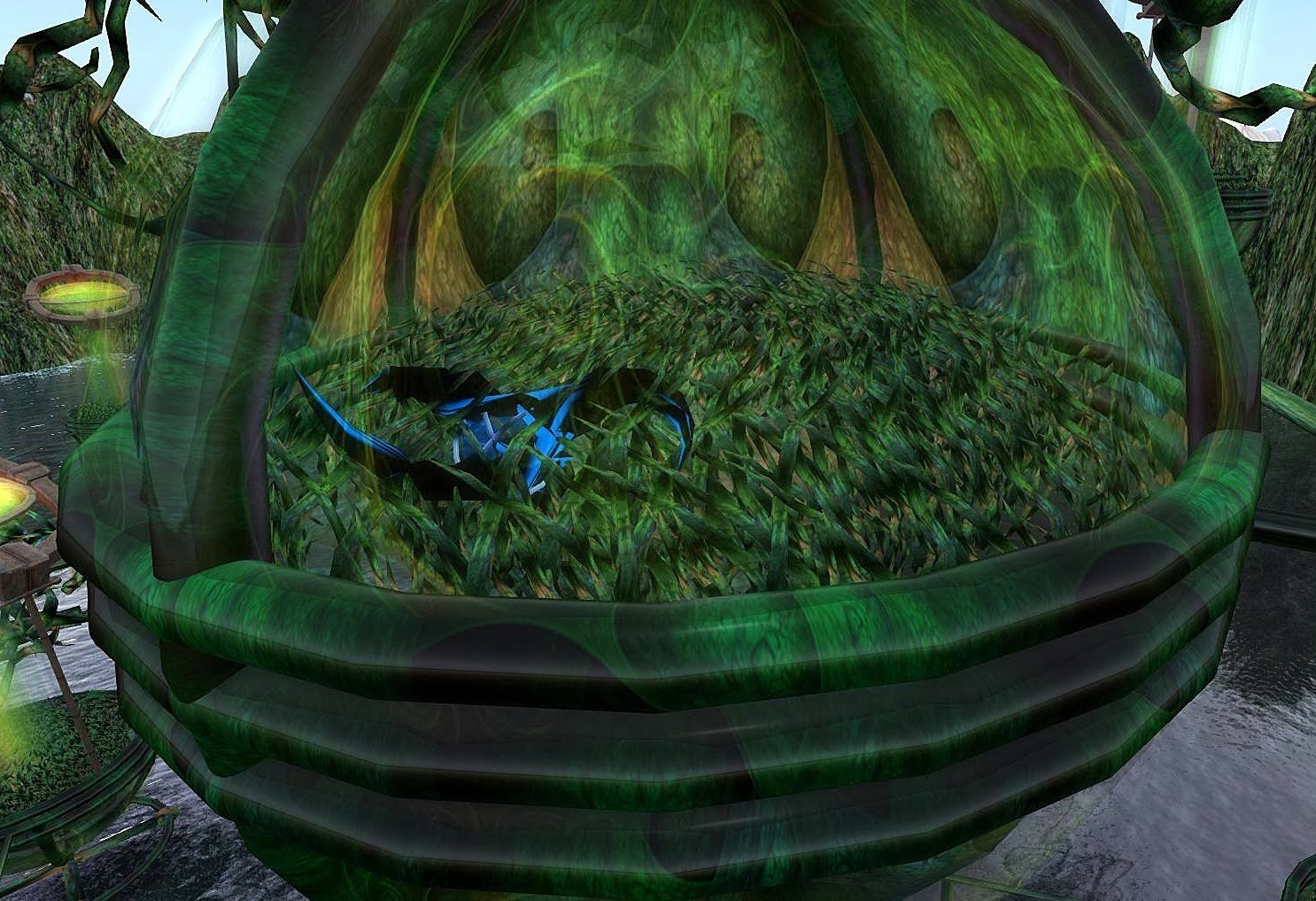 Xineohp was still debating some of the details of the build, set to open on Saturday, February 8th, but he was still willing to talk about it. He also told me he is the alt of an older resident, so watch for an Oldbie Project from him in the future.
We went on to look at an old THiNC Book that had pictures of older avatars, and quotes about their relationship with their avatar. We poured over it for a while, and I was pleased that he was so willing to spend time. He reminisced about his early days: "I remember when I first came into SL, and started building. I was a total massive crap at it! I built a swimming pool, which even I wouldn't want to swim in!"
"You remember free 512 land when you signed up as a premium member? I went from owning my first 512 to buying an entire island. That was fun.
"I did a charity art thingy on my island for World AIDS Day that ran non-stop for an entire weekend, and we raised just over 500USD. Then I kinda gave it up … Real Life, work, yada yada. Then I came back and lived in a rock, after killing my first avie in a big swan song. I burnt the entire island, and reinvented myself as Xineohp Guisse. Xineohp is Phoenix backwards, by the way."
Cube Project posted by Bix: http://slnewser.blogspot.com/2012/09/sl-video-cube-project-lea-2012-second.html
<-- About the build --->
For the SecondLife LEA round 6 2014, I present to you Chapter One of my 5-month long build - The {Lost} Garden Of Sundarya Lahari.


The build is based on live sampling of my cello "plucking". Each "reed" in the build, upon collision, produces a specific note. The build is made up of two chambers - An interactive chamber where avatars can move around, collide with the reeds and make their own music. And a second chamber, where the musical notes are produced in total random fashion by the collision of the creatures "the pentapuss" - Thus creating a musical score that is ever-changing and evolving. 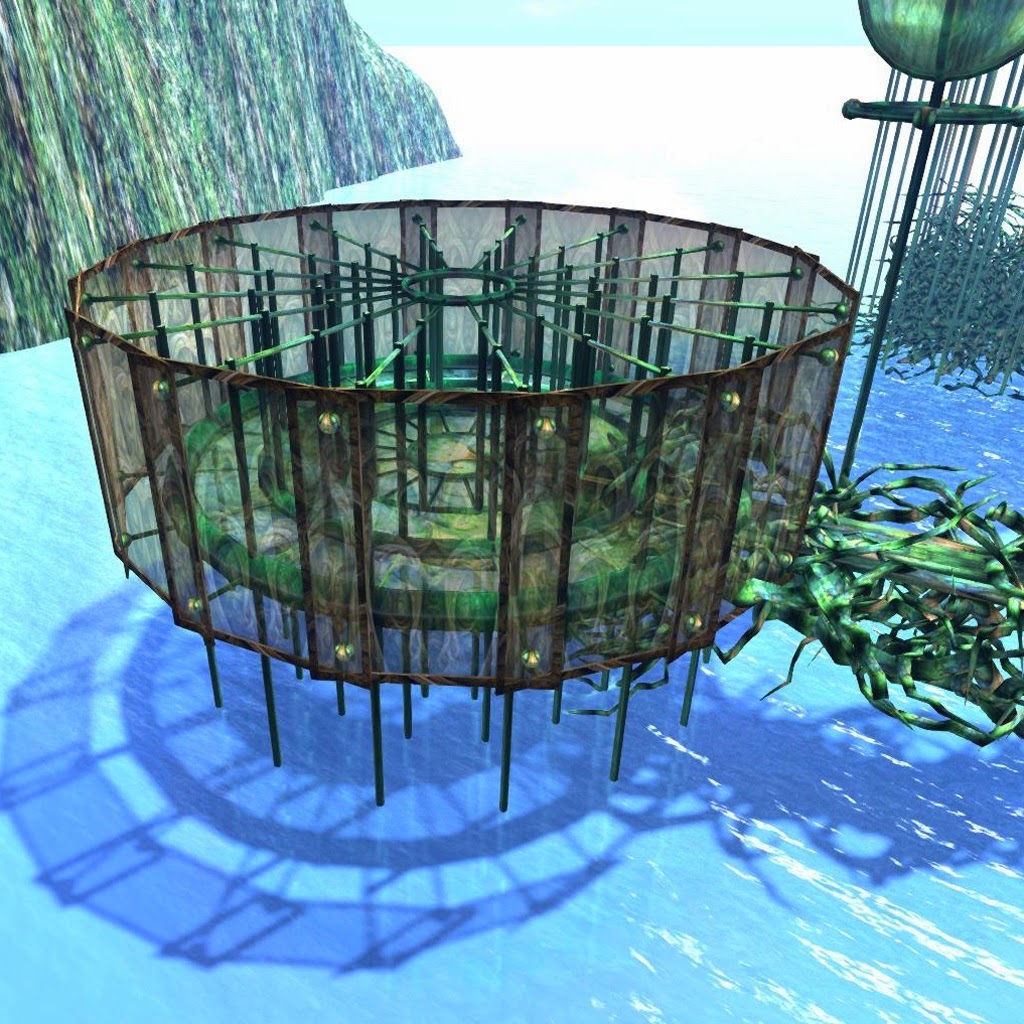 Resonant sounds/notes are produced when two notes are simultaneously struck.


P.S. This build would not have been possible without the help of my dear friend (and darling sweetheart) Nava Muni, and the generosity of Linden Lab with the LEA initiatives.
So, you absolutely must come see this build at the Linden Endowment for the Arts. Here’s the information from the notecard for the event:
SLurl to installation: http://maps.secondlife.com/secondlife/LEA13/125/82/29


DrFran Babcock
Posted by Bixyl Shuftan at 6:00 AM No comments: