There were six contestants in the Jukebox building contest sponsored by The Virtual Museum of Architecture, located at Purdue University (207, 113, 26).    As you may remember from previous articles, their Spring Build-off theme featured 50’s drive-ins.   The theme proved to be so popular that they decided to hold a mini Jukebox building contest. 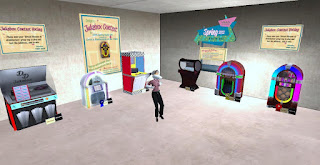 Elaara Wylder-Hansome (elaara.wylder) won first place with her fun design.  Elaara never expected to win.  She said, “I was excited just to take part!”   Her entry features lots of neon in colorful pink, blue, green, yellow and purple that rotates and changes.  Records move and drop down, too, just like the old jukeboxes used to do.   (Or so I’m told.)
One of the criteria for the contest was that the jukeboxes had to be able to play music.  Originally the requirement was to play a 50s stream, but that was later modified to require that it could play a song that was provided.    Neither Elaara nor I could remember the name, but it’s an upbeat, familiar-sounding rock-n-roll tune.  I couldn’t resist dancing a bit. 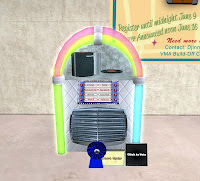 Neural Blankes won Second Place, and Third Place was awarded to Toxic Darkmatter.   Darkforest Dean (rottin.dean) created a jukebox with six selections in it, including Doo Wop and a Rockabilly station.  Jolie Serendipity and Djinn Dasmijn, who coordinates the contest, also competed.
The winners were selected by members of the VMA, who voted for their favorites.  The competition was tough as all of the jukeboxes look great.    They are on display now, along with the drive-in trophy designs, inside the VMA building.

Grey Lupindo
Posted by Bixyl Shuftan at 12:00 PM No comments:

A few days ago I visited the Rasmuson Gallery of Alaskan Artists, located at Rhetorica (203, 235, 86).  The SL Rasmuson Gallery eliminates the miles and miles that separate us in RL and lets us experience the people and their art that we might otherwise never get to see.  In RL it is located at the University of Alaska in Fairbanks.   In SL, a quick teleport takes you to an open-air, multi-story gallery filled with light and connected by a virtual flowing river. 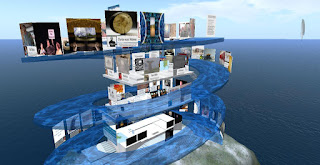 The current exhibit highlights the winners of the 2012 Individual Artists Awards.   There was a simultaneous event held in RL and SL on June 5 when the Rasmuson Foundation announced the winners.   This was the sixth year that they have held the event in both RL and SL.    According to their press release, the SL location was projected on a big screen at the RL event located in Anchorage, Alaska. 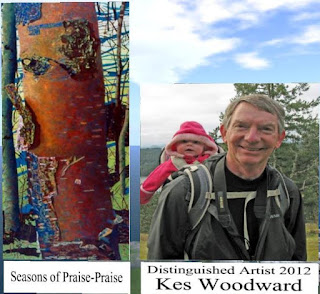 The 2012 Distinguished Artist Award was presented to Kes Woodward from Fairbanks for Visual Arts.  He received a $25,000 Award.  He was born in South Carolina and moved to Alaska in 1977.  He is a Professor of Art Emeritus at the University of Alaska Fairbanks, where he taught for twenty years.  In October 2004 he received the first Alaska Governor's Award for Lifetime Achievement in the Arts.
Fellowship Awards of $12,000 each were presented to   Da-ka-xeen Mehner, Visual Arts; Jack Dalton, Presentation Interpretation; Tommy Joseph, Visual Arts; Karina Moeller, Music Composition; Kat Tomka, Visual Arts; Brendan Harrington, Visual Arts; Sonya Kelliher-Combs, Visual Arts’; Philip Munger, Music Composition; Morris Palter, Presentation Interpretation; and Laura Bliss Spaan, Media Arts. 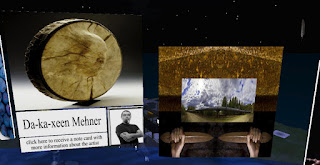 As you walk through the gallery, there are photos and notecards of the featured artists and exhibits of their work.  The art is beautiful, and the artists are a very diverse group.  Da-ka-xeen Mehner, who was born in Fairbanks, describes his parents as Tlingit/N'ishga (mother) and Hippy/American (father).  His work examines his multicultural heritage as an urban Native American in Anchorage and as a rural Hippy in Fairbanks living without electricity, running water or phones.  He is an Assistant Professor of Native Arts at the University of Alaska Fairbanks, and the director of the UAF Native Arts Center. 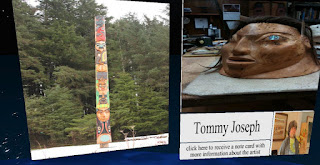 Tommy Joseph, of the Eagle Moiety, Kaagwaantaan Clan, has been a Northwest Coast carver for over twenty years.   He carves totem poles, masks, bentwood boxes, and more.  He is now working on Tlingit battle dress and armor.
Karina Moeller is an Inuit performer from Greenland, but has lived in Alaska for 16 years with her three children.  She has toured all over the world with the Greenlandic Theater Silamiut and with the Alaskan group, Pamyua.
Philip Munger debuted as conductor in 1963, and he also helped start the South Seattle Youth Symphony.  Currently he is Interim Director of the Anchorage Civic Orchestra.  He has been on the faculty of the University of Alaska Anchorage since 1995, and he has also been named to the U.S. Department of Veterans Affairs Bugler Hall of Fame.
Laura Bliss Spaan is a visual storyteller, journalist, and independent filmmaker whose work has been nominated for Emmy awards.    She frequently focuses on the Eyak people.  “More Than Words” tells about the last Native speaker of the Eyak language while “Parlez-Vous, Eyak?”, her most recent film, follows the Eyaks and a young man from France who is helping them to learn their language.  She is currently working with the Eyaks to create new stories in their own language using archival audio and film.
Kat Tomka is a Professor of Art and the Program Director for the Painting program at the University of Alaska Anchorage.  Her art work has been exhibited in West Africa, London, Germany, Canada, the Czech Republic, and throughout the U.S.
Brendan Harrington was born in Massachusetts and raised in Kodiak and Juneau, Alaska.  Throughout most of his life he has combined working as an artist and as a commercial fisherman.   He lives in Kodiak, Alaska now, but he lived in Germany for a while.  In addition to exhibits in the U.S., his drawings and paintings have also been exhibited in Europe.
Mavis Muller is a "story weaver" from Homer, Alaska, who combines basketry, poetry, and storytelling. As she weaves baskets, she tells about the plants, trees and landscapes and how they are carriers of messages and blessings.  Her baskets have also been exhibited in museums, art galleries, and juried art shows.
Rosemary McGuire is a writer from Cordova who focuses on contemporary Alaskan life.  Her work has appeared in Quarterly West, River Teeth and ISLE. She has been recognized by Association of Writers and Publishers and The Atlantic Monthly. She has written two books which have been excerpted in literary reviews.
Last year's event was filmed and will be part of a film being produced by Pooky Media, a SL company.  The film is expected to debut this month and will show how the Rasmuson Foundation is using SL to promote Alaskan art to a world-wide audience.

Grey Lupindo
Posted by Bixyl Shuftan at 6:00 AM No comments:

Behind the Scenes of SL9B 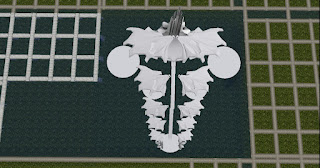 Since I have been involved in training on how  to help exhibitors get settled on their plots I have a tiny peek inside. Crap Mariner has done a wonderful job of manicuring the lawns and all the missing roads are back in place (not sure how they became missing).  There is some dust in the air from the building of a stage for the DJ and their music. I hope the wind is low next week. 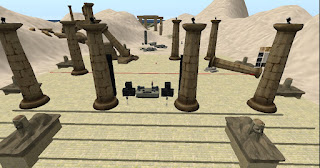 The main stage is spectacular.  I cannot imagine how the choice of exhibitors is going. I think there were over 480 applicants and only 300 plots!! Scary job to choose. The last I knew there were so many people who applied for something: 200 greeters, 200 DJs, 250 live performers, and more.  Training is going on daily for all volunteers to help us know how to make this the best party ever! There is an electric feeling when we get together with the other volunteers . 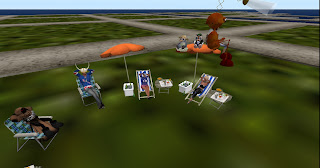 Though as you can see from some of the pictures the instructors tried to make us comfortable and happy, plying us with food and drink as we lounged on the empty plot. Monday the building will begin and I cannot wait to see it as the sims fill up. There will be many other things going on for the SL9B and there is to be a hub where other events will be displayed. You wont have to miss anything going on anywhere.

Get Ready to Party!

For more information, check out the SL9B website: http://sl9b.wordpress.com/