Earlier, the Newser reported on a Halloween party held at the steampunk-themed community of Caledon. For fans of the area and people who missed on the event or are looking for more fun there, or are just looking around for more spooky fun, there's more fun and games to be found there. 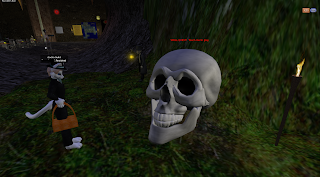 Cynthia Farshore's Caledon Downs has a few games that residents looking for spook-tacular fun. One is a Skull hunt courtesy of Shockwave Yareach. To start, look for one of three large "giver skulls" that will hnd you instructions, as well as a basket. "There are nineskulls hidden about, here and there.  When you find one, simply touch it (note: you must be within 20m).  The picture of a skull will appear in your basket, showing how many you have found.  Try to find all nine skulls and put their souls to rest.  But don't think this too easy.  Not to give anything away right now, but keep in mind as you search that the dead are not resting right now.  Just keep that thought in mind."

The skulls could be "in any public building, gun placement, tower, runway, hanger...  If you don't have to cam to go there, it can be there." They will not be underwater, inside vehicles, in trees, or private homes. 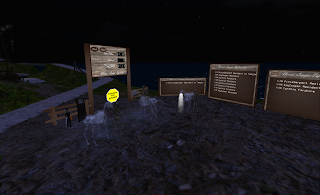 Also at Caledon Downs, in the northwest corner of the sim, is a Haunted Steeplechase. To run it, go to the starting gate, touch it to start, and run the course as it goes up and down a nearby hill, jumping over obstacles. The best times are posted on the board. I saw no sign of a horse rezzer, so you'll have to provide your own steed.

To the east, there's a shooting gallery. To play, press the sign to get the spider gun in your inventory, then click on it and select "add." You then press the green button to start a round, shooting spiders at the various monsters and ghosts. When you're done, your score is displayed. 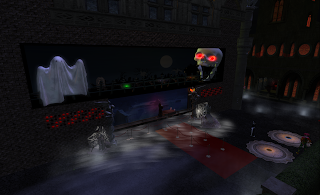 To the south of Caledon Downs is Caledon SouthEnd. Here, you'll find a spooky amusement park in three parts. There are a number of rides to go on, notably four rides through haunts. The "Orphan Asylum" ride was busted, but the other three were working. Probably the scariest of these was a demonic-themed one which the maker felt they needed to add a disclaimer on. 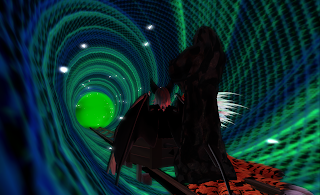 There were also games to play, such as a "wack-a-mole" type game with witches popping out of nine pumpkins. There was another shooting gallery game, in which one was to shoot the zombies while avoiding hitting the human. In another shooting game, one shoots at witches, ghosts, black cats, etc. while avoiding hitting the pumpkin, "we need it for the pie." For those wanting a break from the spooky, there are regular rides such as a ferris wheel.

The main parcel of the carnival is at http://maps.secondlife.com/secondlife/Caledon%20SouthEnd/129/41/23

Caledon is a big place, so there's likely to be a Halloween attraction I missed. But the ones I found are worth stopping by to look. 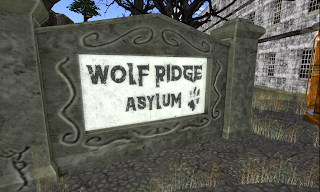 Halloween season in Second Life means plenty of haunts to visit. There are too many for the Newser to write in-depth about, and too many for most residents to visit. So to stand out, some are making an extra effort to give the audience a more exciting time. But Wolf Ridge Asylum is going all-out to give it's visitors a scare they'll never forget. Located in the Geerkil land sim, this isn't a run of the mill spook house, but a three story maze of horrors with traps, reactive mobs, and volunteers playing the part as monsters. But the journey isn't the only reward. There's also a scavenger hunt with a prize for finding all the items.

1-quarter sim... Three stories high... Featuring Hidden Traps and Live Adversaries! All-Fur Radio Media in association with Club EFS present you... The Wolf Ridge Asylum! Come to Geerkil Land at Club EFS for the Halloween Fright of your un-life! Join the party at the club, and then dare the horrors of the Asylum Labrinth! Win prizes and have fun, now until the lights go out on the 31rst!... And be prepared to make the Ultimate Sacrifice! 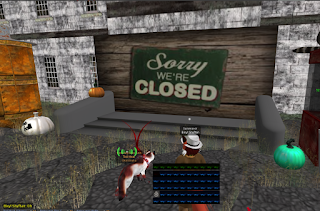 I met up with one of the staff, Tod Heat (Okori Inaka), the designer and general manager. Speaking to me in Voice, he called Wolf Ridge Asylum a "funhouse for SL-goers" with "traps and live enemies. It was made by the staff of Club EFS, which was nearby, "It's open at nights run by a bunch of furries. You enter a game with scripts. Big Linden prizes. ... something special for the adults once the kiddies go to bed." Unlike most haunts, it's only open at certain times as "people where cheating when it was closed." So when it's not operating, those dropping in not on an approved list will be booted out. Tod did say on Halloween, they'll give some extra time for people to finish up." The location is "music powered" by  All Fur Radio. 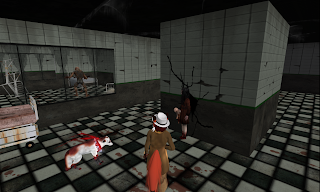 Tod called the Asylum an "absolute labyrinth" with all kinds of features, and horrors. Playing it properly requires a HUD. The place has barely visible, or outright invisible, traps that will "kill" your avatar and send it back to the safe zone next to the entrance. There are also animesh and mesh mobs that move about, or pop out from some hidden location. Some of these will react to your presence and will also teleport you back to the start if they touch you. And then there are the "volunteer frighteners," human-controlled avatars like you playing the part of monsters whom will be unpredictable. Will they just sit around, or will they be relentlessly trying to hunt you down like no script-controlled animesh bot ever could? 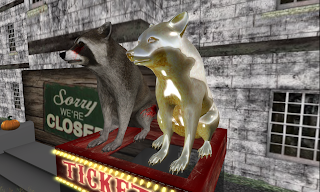 As an extra incentive to brave this nightmare, there's a scavenger hunt with prizes. Scattered around the Asylum are dozens of raccoons (a scavenger hunt for scavengers?). There are sixty raccoons, fifty regular and ten golden. If you manage to find all fifty of the gray critters, you get a 3000 Linden prize. If you find all of the golden raccoons, you get 5000 Lindens. If you find all five dozen of the regular critters *and* the golden ones, you get a whopping 10,000 Linden dollar prize. At the time of the interview, Tod told me so far no one had been able to collect enough raccoons to get the top prizes.

There is no fee to enter the manor to make a try for the prize, "It's all free." They do accept donations. Besides Tod, others on the team included Kate (Katelynni Resident), Correzz Resident, and MetalWolf Nootan. JB Raccoon came up with the original concept of Wolf Ridge Asylum. 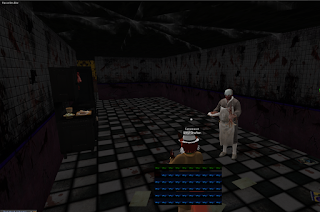 Along with the HUD, I got a short tale of the haunt's supposed origins, a place of refuge and healing that was made following a terrible war that people, human and furs alike, felt had cursed the land. Over time, conditions in the Asylum deteriorated, until an investigation revealed conditions that shocked the most war-hardened veterans among the police and the place was closed. Supposedly few have dared to go in, one who did and managed to escape saying:

"Be warned of the Wolfridge Asylum!! The nightmare begins as you walk in the front doors! No! It's the very grounds itself! Oh, gods. Guns don't work for long! Blades only hamper them!! Light only keeps them at bay! Nothing you carry in there will save you!! The way the Asylum sucks you back and forth in time, forces you relive any tiny mistake you make; to re-live the pains again and again again!! One inmate told me that if you stay too long?... You may just become one of its residents yourself, becoming the very things that chase, punish and torment!! I've seen it myself!! It's all worst on the Pumpkin Month!!! Then, it becomes three times its former power, and it's only growing year by year! There's no end to the pain, suffering and torment!! The Asylum is pure evil! Please!! Please, don't go in! You'll be lost forever!! Forever!! FOREVER!!!"

The Wolf Ridge Asylum is located at Geerkil Land (165/122/2251), and is open Thursday to Sunday from 9PM to 2AM SL time, with the last day open being Halloween, in which it will be open a little longer for people to finish.

Can *you* rescue all of those poor innocent raccoons from the nightmarish horror and walk away with the prize that has eluded everyone else?

Note: The notecard I was given told me the times open were from 5PM to 10PM SL time, though I was told differently. Also, I had been told All Fur Radio had been a co-sponsor of the event. I was later contacted by someone saying they were providing the music, but that was all.
Posted by Bixyl Shuftan at 4:30 PM 3 comments: