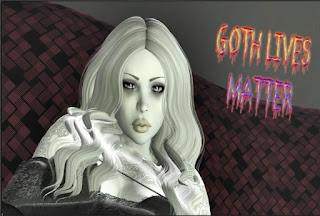 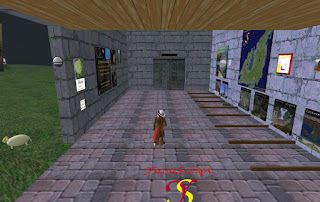 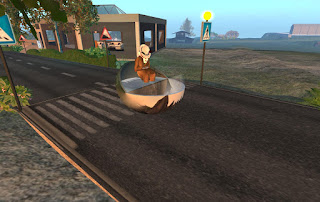 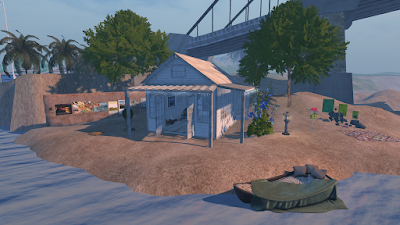 Scraps, by Veyot (Resident) is the current collection of art on display at Montara Bridge Works Gallery in Second Life.

The gallery is located in the sky above a tiny beach idyll where visitors are welcome to relax and enjoy the waterside setting, take off for further exploration in a passing Yavascript Pod, select a destination from the posters on display or check out the landmarks from a notecard in the news vendor. 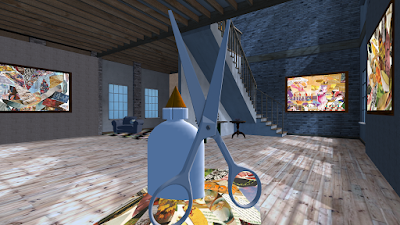 Into this context, Veyot has placed her virtualized collection of hands-on, real-life collage work, made initially not with pixel manipulation but with glue, paper, and scissors. The collages are abstract and freeform with thematic echoes of shape, color, and content, leaving it very much to the observer to take what they will from the detail.

Veyot's summary, provided in a notecard at the exhibit, states: "These abstract collages are made from scraps of junk mail, old calendars, magazines and newspapers. I use them for greeting cards or fold them over to make covers for tiny notebooks. I prefer to tear random shapes instead of carefully cutting around an object. In SecondLife, they seem more useful as textures rather than wall hangings, so I put them all in one box. It's upstairs." 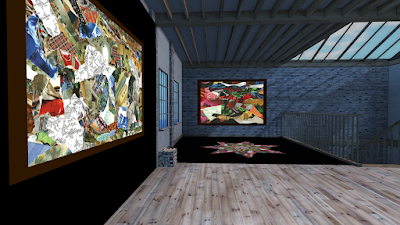 Many of the pieces include tantalizing fragments of text and a mixture of formal and informal composition, figures, faces, textures from nature, fabrics, maps and photographs. There are 12 individual pieces on the wall and several décor items textured with collages as well as the box of textures, which are on offer as freebies.

However playful and accidental the works may appear at first, they are marked by a coherent style and overall feel that perhaps comes from the fact that Veyot has been making collages for several years, although this is the first time they have been presented in an inworld collection. Veyot explained to me it was the combination of her commitment to making a "collage a day" while stuck at home during the Covid-19 crisis and an invitation by gallery owner, Pearl Grey, that provided the impetus for the project. 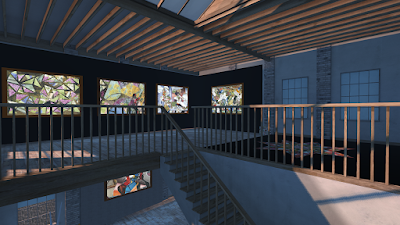 The pictures were chosen from dozens of possible options. Choosing the ones that would work together in the space, Veyot tells me, was a challenge that took "some imagination". It is an accessible exhibit in that we are likely to be familiar with printed material and many of our humans had a crack at sticking things together on paper in our early education. I found myself naturally responding to the colorful, kaleidoscopic compositions as they seemed to celebrate nature and topography, everyday life and exotic locations, inviting fresh associations between visual cues. 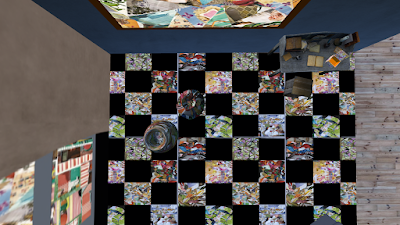 It's inspiring to look at these pictures, and I found myself wanting to have a go too. I asked Veyot if she had any tips for wannabe collagers. She said, "Calendar pictures are an especially good source because of the size. Tear the page into random shapes and then glue them down in random order for a simple abstract collage. Take care which way you hold the paper when you tear. You can get a white edge either showing or not, whichever you prefer." 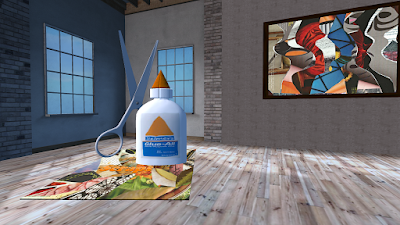 Veyot is one of many creative souls making ingenious use of the opportunities in our virtual world to make art and stories and have adventures. You can read what she's up to on her blog or follow her on Tumblr.