The Gacha Ban From Two Owners' Points of View

On Sept 1, the selling of items through gacha machines was no longer permitted in Second Life. It was about a month earlier that the upcoming ban was announced. It was probably one of Linden Lab's most controversial moves in it's history. It was certainly it's most controversial one since the move to Cloud servers. There were no shortage of comments about it. Most were from fans of gachas and their detractors. Not so many were those with the most to lose: those merchants and content creators whom were using gacha machines to sell their items.

The Newser reached out to some. We had some responses, the two with the most to say being Nams (Nama Gearz) of the Gacha Guild, and Keira Raindale (KeiraLans Resident).

Nams commented on Discord "I could say a few things since I've been making gachas for a few years now.

"I can easily say the ban won't affect me all that much. I've been gradually making less and less gachas over the past year or so, mostly because I believe they've run their course, and I've seen an increase in profits after focusing on regular release items. Since gachas have so much production time involved with them due to all the varied items you have to make for the set, it really just makes more sense to focus all that time and energy into a regular release. A regular release with fuller features and copy/mod permissions seems to beat out the gimmick of gachas in the long run and I can make regular release items for 2 events in the time I can make a gacha set. The only way now the ban will effect me is having to rebox all of my past gachas for resale, but that can be done over time so it's not a huge worry.

"Business aside, I will miss the fun of gachas. Playing them actually was fun for me and my friends, to throw a few Lindens into a machine just to see what you get or giving extras to friends. Going "Look what I got!" roaming around with friends at events will always be a special memory and I am sad that this aspect of gachas is going away."

The Gacha Guild team had earlier made a public statement on it's website, saying the event would change to "straightforward, regular sales." 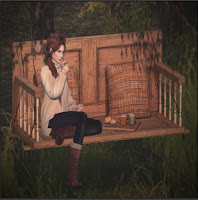 Another seller who did business through gachas was Keira Raindale (KeiraLans Resident), who I heard about through Prokofy Neva. Contacting her, she thanked me for paying attention to the issues, and sent me some notecards.


As some of you already know, gacha will be banned from SL since September,1...

I am really trying to cope with this news and to figure out what to do next, but right now I feel very lost.

Most of my income came from gacha and I seriously doubt that I'll be able to cover my SL and RL expenses with regular releases only...

My C|M collections never get as much sales as gacha sets (even when they have 10+ items in). It's not about quality, time and effort. I can spend 60+ hours on a highly detailed project, and it will never bring as much money as a gacha set made in a week... 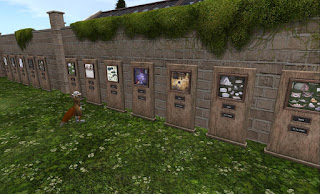 As you might notice, I don't make a lot of gachas these days.  Arcade covered my fullsim rent + other fees, and an extra set every other month helped me to maintain my modest middle class lifestyle here in Russia.

In order to make this money without gachas I'd have to create 10-15 new releases a month - that's unrealistic, and I will be burnout in just a few weeks.

I do love gacha both as a creator and a shopper, I think 2/3 of the stuff I've ever bought were from gacha machines, and it really feels like one of the last things I actually enjoyed in SL is soon to be gone.

Maybe it's a sign for me to move on and finally do something else outside of SL.
I'm not closing Raindale just yet, and have no such plans in the next few months! But if it turns into a hobby without any real profit - I'll have no choice but to minimize my time here.

The most confusing part for me - is what to do with existing gacha sets.

There is no way I could possibly re-package hundreds of items into individual products, make new pictures, replace note-cards etc... it would be a huge waste of time and prim space (especially since I'll most likely have to move to a cheaper sim with less prims)

She had decided on the following:

I will make copy+ full-sets for gachas that are currently in main-store - after September,1

I will have to completely retire (remove from store) most of the older machines in the Outlet area.

I will try to hand-pick the best prizes from all the sets and re-package them into copy+ releases - it will take some time and there is no guarantee that a certain product will ever be for sale again individually.

I will still exchange all the prizes purchased earlier (or from re-sellers) to copy+ on request
*yes, re-selling gacha prizes is still going to be legal


While the gachas were still allowed, she put hers on 25L a purchase, 'let's enjoy our final days of "risky gambling' and 'lucrative business' (grin)."

Of how much she would charge in the future, she had this to say:


All of ex-gacha sets will be priced as my normal copy+ products at this time:

I'm afraid I will have to raise prices eventually, to survive in a new market, but only for the future products.

I made some approximate calculations on a few gacha sets and it looks like copy+ fullpacks will be around 900-1500L$ without any discounts applied. The final price/discount amount will be different for every set depending on their value.

Few collections will be repackaged and set for sale with all individual prizes available to purchase separately (right now Wonderbell, Riverbreak and Millcreek are on that list due to popular demand)

A few prizes will be individually set as a small copy+ collection/mini pack (Moonleaf boat-sofas, Applemore couches and poufs, Meadowbloom arbours and swings - the list will extend based on your requests)

A third notecard was presumably made later on, "I received an overwhelming amount of questions, opinions, suggestions and just sweet messages from many of you! I think I should share some of it with the folks who have the same thoughts/solutions/concerns, but decided not to contact me for some reasons (cheers to all the introverts out-there ♥)."

• First of all, there is a popular opinion that if we put our gacha items in regular vendors, we'll have the same profit (or more). Sadly this is not true! Most profit comes from gacha re-sellers. Regular customer spends a few hundreds L$, regular re-seller invests a few thousands in a good gacha set. As a result I get a lot of sales during event, re-sellers get even more profit on a longer distance and customers can choose to have fun and pay a little for a random item or pay more for specific product. In my opinion (as an avid gacha player, ex gacha re-seller and soon to be ex gacha creator) It was a good and fair system for everyone.

I simply don't feel comfortable to charge 2000L$ for a house and up to 5000L$ for a full set as re-sellers do. So without re-sellers my revenue will automatically shrink down to 50% or less, even if all the same people will buy all the new products directly from me.

• I'm glad that creators are trying to find some new and exciting ways of shopping to replace gacha! Normal shopping is boring :D Unfortunately new systems that were introduced so far didn't inspire me as a customer, therefor I'm not going to implement them as merchant (I'm talking about those conveyor style vendors)

• I will also pass on simply drugging all the products to multi-vendors, or put that hover-text script inside old gacha machines. I have standards :D
Last year I re-packaged every single product just so they all have updated LM and NC inside! I think, that things like correct note-cards, individual pictures, nice packaging and overall aesthetics are super important - call me silly for that XD

• I will try to put for sale as many individual products as possible considering prim limit and general demand. You can always ask me to put a certain item for sale - many people already did - I'm very flexible about those things!

• I very much like the idea of collectibles - as transferable products available for a limited time or in a limited amount of copies. You can re-sell, trade, gift them to a friend and so on. All the things we loved about gacha minus the fun of getting a random prize. I'll try to make first collection in September and we'll see how it goes. I will also exchange them to copy+ on demand (normally less than 5% of my gacha players requested an exchange, so I see no point in making copy+ vendor at the first place)
I hope you'll also like this idea of having more exclusive and limited products + it will help re-sellers to stay in the market after gachas are gone.

Though we need to find a balance between re-sellers quickly getting all the copies and sell them for insane prices - and customers getting so many copies, that collectibles are no longer so special and exclusive.

I'm not sure how to make it fun, fair and exciting for everyone, let me know if you have any thoughts!

Keira did add on a personal note, "Quite a lot of people contacted me with their concerns about my financial well-being, advices and suggestions  - it's so very nice of you - but I can assure you there is nothing to worry about. ... Even though I had the most terrible RL summer with a few family members having serious health issues - I'm still a debt free home owner in a country where minimal wage is 185 US$/month and average salary is around 600 US$/month! There are plenty of ways for me to make money as a 3D artist (actually much more money than I make in SL) - I'll be fine :D In the worst case scenario I'll wipe out the dust from my useless degree in Liberal Arts and get a RL job.

"For the past few years I was privileged to make a living by designing things that I love on the platform that I like - now it's over and I have to find other sources of income in or out of SL. That's OK, I see it as a new beginning. You should have much more sympathy to gacha-creators and re-sellers from more expensive countries, with a mortgage, small children, no free health-care and so on. They are the ones who will struggle the most in this situation!

"Still I'm very grateful for all the support, kind words and wishes!" 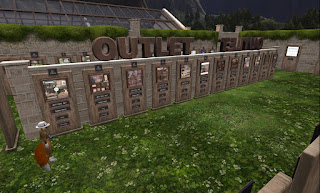 Dropping by Keira's place again, a quick look showed plenty of items for sale, but there was a choice at some vendors of either the rare item only, or the full set for a larger price. For now, she's still in business.

These are just two stories out of many among the gacha merchants. If anyone else out there has a story, either another merchant or a friend/favorite customer of one, please feel free to share it.