The following first appeared in Second Life Newspaper in August 19, 2009

When I first came to SL, alongside the newbie human avatars as choices for one’s first look was one nonhuman, the old ringtail avatar Luskwood donated to Linden Labs. I did find a few free furred avatars in my newcomer period, but aside from the purple kitty avie, nothing seemed an improvement until I had the cash to buy a better avatar. 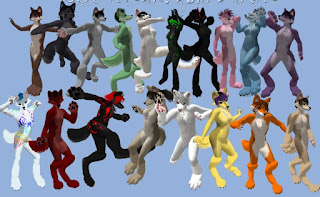 Later, I heard the newbie ringtail had been done away with as an option. So where could a newcomer go to get a furred av, particularly one with a quality look?

It was about that time I found out an answer: the Wingless Avatar package, a collection of quality avatars once sold, now free for the asking.

The Wingless Avatar package is a gift to the residents of SL from the avatar designer Wingless Emoto. He once sold his avatars through a retailer, but a dispute occurred and the business partnership dissolved. Unfortunately for Wingless, the contract signed stated he could not sell the avatars in the deals w ith him through anyone else. So Wingless decided to make them freely available, people able to grab a package at locations, or transferable from person to person. Some carry them not to wear, but to pass to newcomers to SL or those around for a while curious about furry avatars or wanting a different look. Some locations have individual Wingless avatars up for sale for 10L. But this is against the wishes of Wingless. 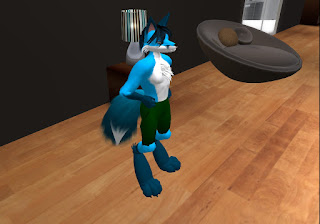 And the package has an impressive variety of avatars. There are many varieties of both wolf and fox-type avatars, cannids being a popular furred av in SL. There are also a few hyena and horse avs in the package. Rezzing the box on a sandbox and unpacking it, one gets a folder filled with each avatar, boxed. One has to rezz and unpack each avatar.

The avs come in both male and female skins. Highly modifiable, each av offers a choice of either plantigrade (walk on the heel like a normal human foot) or digitgrade (walk on the ball on the foot) lower legs. The latter looks more exotic, though someti ¥mes one can see the shadow of the invisiprims, and long pants worn end up looking cut off with a ring of fabric around the ankles. There is an option for small or large hands/paws. For the wolf avs, A Customization HUD gives you the option of showing canine teeth or not, and choosing the color of eyes, paws, claws, and the inside of ears. Another HUD, “Control,” allows for options for twitching ears, wagging tails, blinking eyes, and blushing. 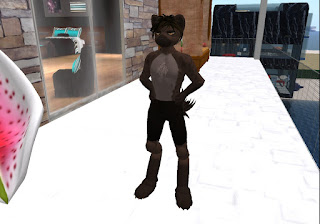 It should be noted one doesn’t *have* to wear the whole avatar. I have seen some kitsune-style nekos who told me their ears and tails came from Wingless avatar parts. As there are several styles of hair that come with the av, this means a few
free hairpieces. A good place to look if you need one in a hurry upon getting a av with no hair.

The Wingless Avatar Package can be found in some freebie locations, though in any place in SL with some furs, it shouldn’t take long to find someone who has it and get a copy.

Six years later, the Wingless avatars are still around. Despite that they're free, they're not worn as often as before. It seems most residents who prefer a nonhuman look whom get a set of them replace them with a more recent avatar as soon as they have the Lindens. There are also other avatars available as freebies, either legitimately such as the AX avatars at Northstar, or copied without their creators' permission and made available as free packages, such as Avenity.  Still, the avatar does have it's place in Second Life. It comes in a variety of colors that remain unmatched by some other lines of avatar. Plus with some clubs having script limits, some residents will find their favorite avatars will have problems getting them in. But with it's smaller number of scripts, the Wingless will have less trouble doing so. And if one runs across a resident interested in a nonhuman look but doesn't know where to go, one can just hand over a package of Wingless avatars.

*Addition* With the InWorldz grid becoming increasingly popular, a collection of Wingless Avatars was imported there as well. So now the avatars are available now in two grids. 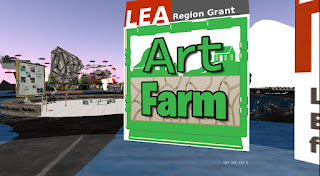 When I stopped by the LEA welcome center to see if anything new was going on I found a billboard for the ‘Art Farm.’ The name was intriguing so I hopped over to the region to see what it is. I found the sim divided into four areas with eclectic installations in each. I was happy to run into an artist working on her gallery, Elle Thorkveld. She filled me in on what she was doing and gave me information to help me understand the concept of the region. This is a coop art project involving all the group members of the Vaneeessa Blaylock group, (anyone can join) VB Friends. I would call it a work in progress for sure . It will be evolving and changing all the time for the next 6 weeks.

There are four “lands” in which to play, they say.

“MUGA - Medici University Gallery of Art - Exhibits & Classes. There are some galleries there to visit with many lovely pieces of art to view. I spent some time going through them . Director - Myra Wildmist and Jade Ravenheart (Cynn Blackrain)

BABEL INFCALYPSE -Babel is the sandbox for all the artists to use and create. Director- Neeva Torok 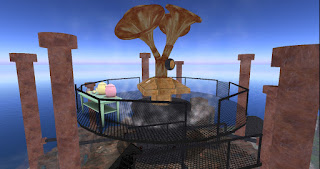 Ward81 is a tribute to Mary EllenMark who passed away in the spring. and the artists are invited to live or hang out there and create as they wish. You will find tower in Babel and if you are into machinima, or art performances, you might like this area Low Fidelity. In Muga if you like to teach or learn go there. Stop and try the tai chi while you are roaming... very relaxing. For me, it brought back memories of my early days in Second Life when I went to do it at  Hosoi and Apollo. Sigh. I stood and watched Gwynie Beaumont (Gwynach) work for a while with her sculptures in front of her gallery. 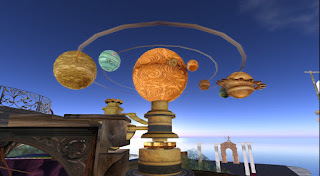 This creative activity rose out of a past work that I somehow missed. I spent some time talking to another artist that I had met in the past at Burn2, Veyot.  She explained it all to me and told me that it came from the Medici University ,  http://mediciuniversity.co.uk/  . This was new to me also , which appears to be an online university for arts and more. Edie1943 made the proposal to Medici University to use the region for this purpose. I found the proposal on the website and you can read it all there.  It all looks like so much fun and sharing for anyone who joins the group. If I could  build I might be tempted . If you can , why not try it all out and see what LEA provides for creative residents. “Come Play!" they say and mean it !Myra Wildmist was also very helpful in sorting me out with the directors names and checking my backstory. Check it out! 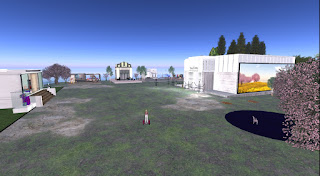 I took a tour of the whole four areas on my segway to see what is there now. Veyot told me that some artists would be creating items short term during the whole exhibit so I plan to go visit often during the next six weeks to see the changes. http://maps.secondlife.com/secondlife/LEA28/108/119/22  is a starting point near the galleries. a good place to begin your tour.

Edit: we goofed and accidentally titled it "Ant Farm" at first. 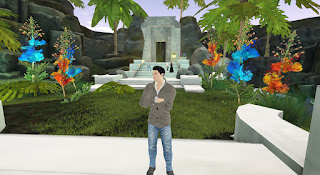 The evil Dr Talpa is on the move again to destroy the grid and Magellan Linden needs our help. That is the billing for the new inworld game called "Paleoquest." I enjoyed the Magellan quest a few years ago,  the Linden Realms, the Cornfield, earlier inworld games that I still visit occasionally so was quite interested in trying this one.

The entrance is at the Portal Park 1 where I ran into a few friends immediately as I landed. Kiera Linden was coming to try it and Marianne McCann and Uccie Poultry, both of whom were there yesterday already. The entrance path, lined with prehistoric ferns and other lush foliage leads to a tall golden entrance where my window donned a hud I and teleported to the visitor center. As I approached I was graced with the voice of Magellan welcoming me with a thank you for coming. There is a background video to bring you up to date on why you are here and a tutorial video for help, and an information card to pick up. And then, you climb the stairs to catch the monorail that circles the entire region with stops at the each quest location. If I waited to write this until I did the whole sim you might never hear from me again! 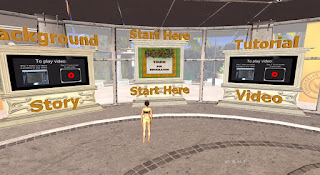 Be prepared! There is danger everywhere you go from the volcanoes, falls off the mountain, holes in the rope bridges, and from above the flying dinosaur who is protecting her nests in one of which sits the prize. Any one of the obstacles can kill you! Along the way I collected dinosaur eggs that were added to my hud. None of this is easy and I died and resurrected six times and lost all my eggs !!!

I am sitting at the resurrection platform now to tell you my story.  I thought it would be better if I told you all this now so you can begin your quest if you like! So many dangers and I have so much to do!!! if you see me along the way say hello! I was going to stop there but after I sat for a while I went to bring back the prize and made it. I entered the pyramid, made my way through the dangers and returned the prize to the rightful owner !! I have no eggs but can go back for more later. 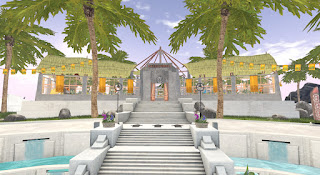 Now I am off to the monorail to get to the second quest which I understand involves toxic water and other goodies .  All these collections involve prizes and Lindens at the payout stations at the visitor center so it is not just for nothing! Read the notecard .

I will let you know if I ever complete the game or perhaps if some part of it is so interesting I need to tell you more. Beware! http://maps.secondlife.com/secondlife/Portal%20Park%201/136/136/23

Gemma Cleanslate
Posted by Bixyl Shuftan at 6:00 AM 1 comment: