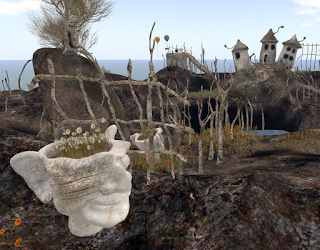 Sometimes, we just put all the possible destinations on the wall and put on a blindfold, spin around three times and shoot a dart. This time, I hit on one called, "Roots," by Cica Ghost. It was described as a sim art project. The illustration showed some odd looking buildings that beckoned exploration. An Artist and Architect in our own right, we decided to go see if there was anything cool to report on.

Arriving at the landing tower, as things rezzed, the music is first to make a good impression. Words like Majestic and Peacefull come to mind. We begin our tour with a spring in our step. From the tower, there are two ways to explore the sim. A balloon ride comes by and give a ride around, with a birds eye view, or you can just walk down the path and tour on foot. Flying is also allowed. Viewing the neighborhood gives us a split impression. On the one hand, the scenery looks like a child's urban creation, made in the sand lot behind his house, but long forgoten and left to nature and her seasons to take back. On the other hand, this place is anything but dead. One senses that the sim is one large, living compost pile, preparing the ground for a lush new life. This sim has an air about it....one that should be kept away from open flames and sparks. 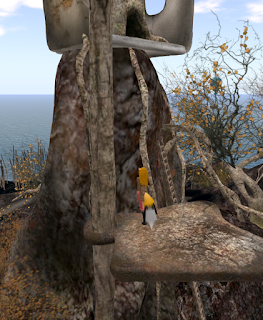 Adding to the "look", the sim's largest resident, a giant snail, with a mud hut for a shell, slimes his way past us, probably on his way to the races. We tried thumbing a ride, but the house was small and he smelled like something that shouldn't be stepped on. We move on to higher ground, where the homes aren't mobile.

Several of the structures had animations, allowing one to gaze out an upper window, while contemplating images, stirred up by the beautiful music. We were somewhat shocked to find one house that was occupied by a little girl and a black cat. Fortunately, they were only statues, so no need to make the sign of the cross or throw salt over the shoulder. Moving on, we spot a large tower, that looks like it would give a great view of the sim, if we could get to the top. A long ladder was shy by 6 meters of the top, but a large flat rock travelled up and down, like an elevator. At the top, naturally a little contemplation came into play, imagining ourselves as a tiny mouse that made it's home here. 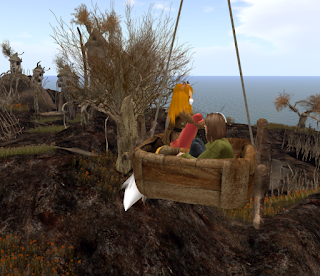 Before ending the tour, it was imperative that we take the balloon tour of the sim. Returning to the landing tower, we grab the next available flight and keep our seat for several go-arounds. On the second pass, a young lady popped into the adjacent seat. Always pleased to share our adventures with others, we smile and say, "This is a fun place, isn't it?" She agrees, then, red-faced, jumps out and waits for the next flight.

Overall impressions of the sim? My hat's off to Cica Ghost, for taking objects and textures of child-like simplicity and crudeness and melding them into a grand and masterful artwork, the size of a sim. It's like walking around inside a painting and you can almost smell the rich humus, ready to sprout any seed that finds it. Maybe it's just the viewer I'm using. Perhaps our readers should visit and see if their latest, greatest viewer comes with [SMELL] parameters.

I give "Roots", by Cica Ghost, a big thumbs up. I recomend you go see it and if you agree, leave a little tip in her balloon tip jar, by the landing. 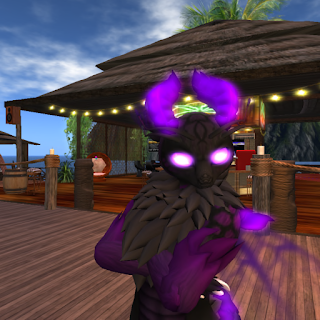 The Will o' Drake, a kzk exclusive, is an avatar resembling a bug, saytr, and human. It, like all of their avatars, is a furry avatar, but this avi takes it to the next level.

The avatar comes in many colors and each version is cleverly named. For example I bought the black version which is named Dark Matter. But the name isn't what gets people talking. The many factors that came together to make this avatar make it a great one.

Let's start at the head and make our way down shall we? Starting atop the head we have a set of horns and antennae. We then have large ears and a uniquely shaped head. On the face we have large solid eyes and a short, but cute, snout.

Just below the head we have a tuft of fur covering the neck and perhaps providing warmth for the avatar. Just below that on the back we have small shell plating with wings protruding from the openings. The wings are nearly invisible and are doubled up. Just below that we have special markings on the belly of the being.

Then we have a stinger like tail coming out of the back of the creature. Inside this carapace you can easily see a large orb like object inside it, most likely the egg sack or some poison pouch. Just below the tail we have uniquely shaped legs that start out at the thighs and then taper down. The feet of this small creature are small with four claws on each foot. 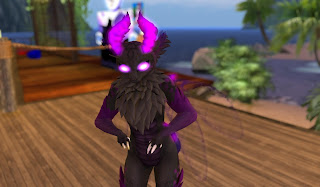 Now lets take a look at the abilities of this avatar. One of these include the wings actually moving as you fly. Another one is this avatar could be a shining beacon in a very dark place.

Inside the hud you have the classic moving jaw, and changing textures for certain parts. However you can also change the claws on this one from black to white and back. And it even allows you to change the color of the carapaces.

All in all, this avatar is one for the history books. For only 600 L, it's practically a steal. In my opinion this would have to be the best avatar I have ever seen.

"Jenny"
Posted by Bixyl Shuftan at 6:00 AM No comments: