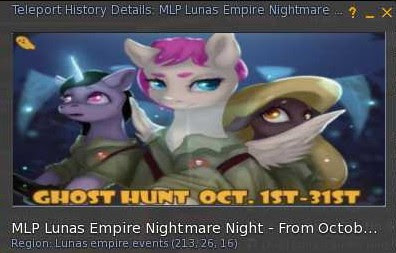 Various communities in Second Life are having some Halloween fun in various ways. For the Pony community of Luna's Empire, they've set up a "Ghostbusters" style game: Luna's Empire Ghost Hunt. It's not just ponies that are invited to take part, but it's open to all. 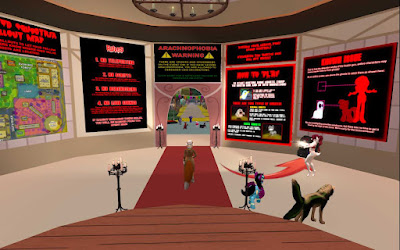 To take part, head to the Luna's Empire Events sim. In front of you are a few panels explaining the game, and a map of the sim. Between the two panels on the right is a proton pack and ghostbusting gun giver. Touch it, and you'll get guns made for both ponies and humans/furs, as well as backpack units (the later are just for show). 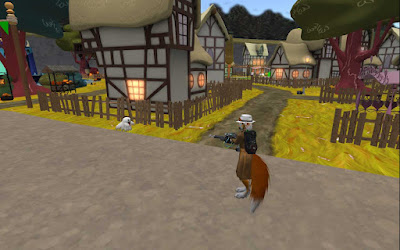 The ghosts come in two main varieties, normal level and boss level. Normal level ghosts come either slow, which look like sheets, or fast, which look like "Slimer" from the movie and cartoon. Both have a single star over them. Just aim the gun a little above them, or right at them if you're a pony, and fire. Before long the ghosts are captured and you get a few points. As the guns were originally made for pony avatars, those adapted for humans and furs may misfire if not aimed just right over the spooks. 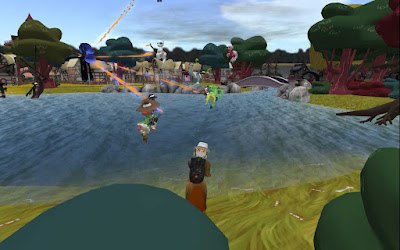 Less common but tougher are the boss ghosts. A single proton gun won't be enough to stop them. They have multiple stars over them, which is the number of players it takes to stop them. The zombie ponies need just a few. But Nightmare Moon needs several players all firing on her at once to take down. When finally busted, both give all players involved a larger amount of points. 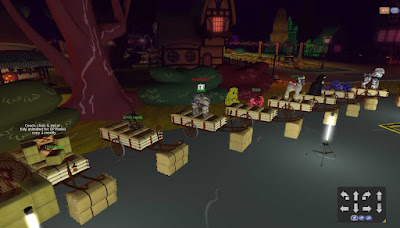 The points are good for more than just bragging rights. In front of the town hall are a number of prizes they can be exchanged for. Most are made in mind for pony avatars. Unlike the Caledon Downs Ghost Hunt, there are no actual Linden dollars up for grabs. 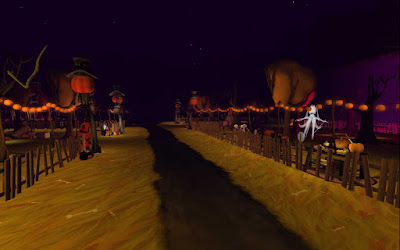 The sim itself has been decorated for Halloween, giving it a cartoony spooky fun (some use the term "spoopy") look. At night, a few glowing wisps move about. And oh yeah, occasionally you'll hear something shout "BOO!" behind you. But when you turn, there's nothing there ... nothing you can see anyway.
http://maps.secondlife.com/secondlife/Lunas%20empire%20events/215/26/14
Bixyl Shuftan
Posted by Bixyl Shuftan at 6:00 AM No comments: