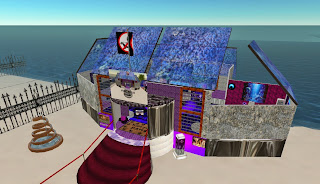 The Fortelia Club is a PG-rated club that caters mainly to furred avatars, but everyone is welcome, "We do not engage in so-called 'yiff,' though we are not prudes either. We just want to provide a nice clean fun area for all furries (and humans) to relax in."

Fortunas Sand is the owner of the club, with his partner Caelia Bailey as the lively host. Fortaelia normally has four parties a week, usually with a theme, on Tuesday, Thursday, Saturday, and Sunday, at 6 or 7 PM SL time. On weekend parties, clothes from the Bare Rose store are given out as prizes. The club can also be the scene of impromptu parties, and it can host parties for those who wish to have them there, if they give advanced warning and not on the day of a regular party, "we have the ability to stream or allow you to stream here. ... If they have their own server, they may use the club for free. If they haven't, we would charge a small price for DJing for them." 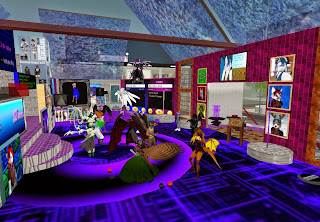 To their knowledge, Caelia and Fortunas do not know of any other furry club that advertises itself as having a PG environment, no gratuitous nudity and no swearing. "We get a lot of the Luskwood regulars here." There is also a group Fortelia Club, in which members get notices about events. Those wishing to join should IM Caelia or Fortunas.

One detail that didn't make the advertorial, the skunk flag with the "not allowed" symbol was aimed at one certain stinker that they didn't want around. But they didn't have problems with anyone else I knew. And I ended up getting a few outfits as prizes, as well as a few pictures for cartoons there.

Sadly the club didn't last long. Due to real life troubles, they had to close the club. But when they recovered, they were soon back, but instead of a club they went into the estate business with "Heaven's Sky Garden Village." But after a few months, real life troubles once again interfered, and that closed down. Eventually, they recovered, and would go on to found two stores, Fortunas Creations, and the more widely known "Furry Fashion" under Caelia, now known as Amethyst Crystal. More recently Furry Fashion installed a club called the Furry Fashion Lounge. So Amethyst is in the club business once again.

Longtime fans of furred avatars in Second Life will probably remember Anthroxtacy, often called "AX" for short. This maker of avatars produced a line that was quite popular, as well as having a popular club next to their main store at their sim Elliquiy. But in October 2013, they shut down, their maker Tinintri Mistral getting out of the avatar business and eventually leaving the virtual world. Despite being gone from Second Life for over a year, the avatar line remains well known. 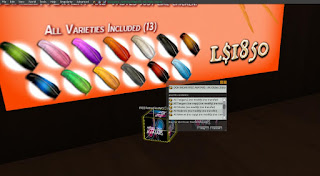 For those still interested in getting one of the Anthroxtacy avatars, some are still available on sale on SL Marketplace. But that is not all. As Grease wrote in his review of the AX Fox, many of the avatars are still available in a spot at the Northstar Polaris sim (40, 188, 3001). There are a number of avatar vendors in the room, but to my surprise when I looked under the vendor of the Feral Phoenix (the orange one to the left in this picture of Grease's), there was a surprise. There were two boxes of Anthroxtacy avatars, available for free! 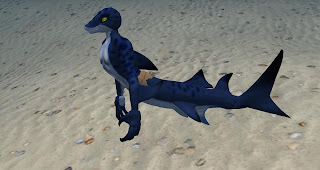 The one on the right contained some older AX avatars, but the one on the left contained several, in "fatpacks" with several of the same kind of avatar in different colors. Some already have reviews about them done on "Second Life Avatar Review Files," such as the Anthroxtacy Mouse. Of those that haven't, one that stands out is the Anthroxtacy Shark. For those whom want to be a part of Second Life's aquatic community, or frequently visit friends there, and wearing a mermaid avatar doesn't seen quite right for you, the Anthroxtacy Shark just might be. 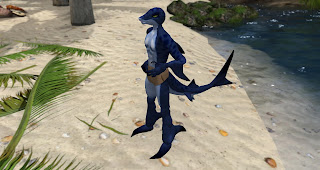 Unlike the other AX avatars, their shark av can either go about on land like the others, or swim about in and under the water.  The "mershark" swims about like a mermaid through use of an AO that keeps the legs together and a tail attachment that makes the legs look like a tail. It's not quite as flexible as some mermaid tails, and it may look a little odd if doing certain mermaid dances.

To go to "landwalker," one detatches the AO and mertail, and attaches the smaller tail, or the "butt" as it's less than elegantly called. It can then go about like any other avatar.

The HUD that comes with the avatar is simple to use. One can turn the AO on or off, the talking animation on or off. One can also keep the mouth open by varying degrees, stick out the tongue or not, make the eyes partially or completely shut, and change the eye color. To minimize, just press the blue triangle on it's edge, and only the triangle will remain on the viewer's edge. Press it again to bring the HUD back. 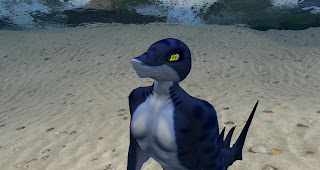 Of the avatar's finer features, the shark's skin has a marbled tone to it rather than a solid pattern. The throat sports some gill slits, static ones as these are strictly textures. The shape of the head certainly looks sharklike, with the contour of it's nose. Besides on the back and tail, there are also fins on the legs and arms.

The avatar comes in both genders male and female. Some guys might be more inclined to go shark rather than go mermaid's tail when wanting to fit in with a crowd of aquatics. But for some reason, most shark's I've seen out on the Grid are females. Perhaps some ladies are using the avatar to discourage lechers. 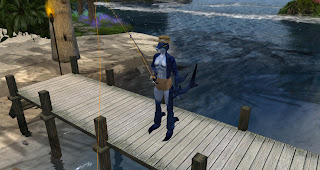 All in all, I was fairly pleased with the Anthroxtacy Shark. While having some small flaws such as not being able to use some mermaid dances, it's still a good choice even if one still had to pay the old price. That now one can get it for free, that just makes it all the more better. The downside, is that there's no guarantee of updates. So as Second Life continues to develop, the avatar *might* develop problems should the old scripts fail to work. But for now, the AX Shark is an avatar one can sink their teeth into. Nothing fishy about it ... well, not the bad kind of fishy. 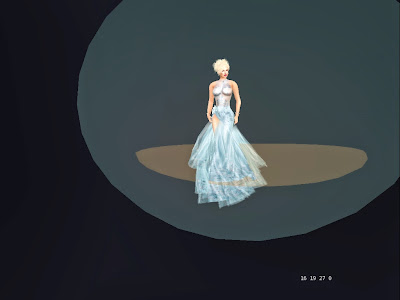 I have been trying for weeks to get to a performance of ‘Body and Soul’ on a Sunday afternoon. I finally made it and am so glad I did. It is spectacular! The music and the dancing and the staging are all amazing. The costumes were to die for. This is virtual modern dance. 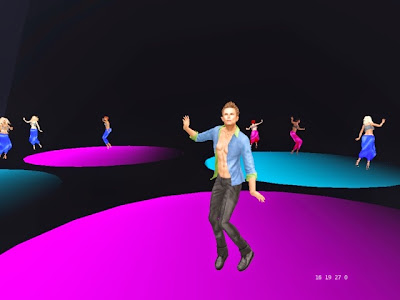 Jie Loon is the founder of this dance group in Second Life, “We use virtual technics to elevate a system of dance-art. We don't try to copy real-life techniques. We try to find a social organisation and communication between virtual avs in front – real human beings behind – in an open cooperative way –We are in a dynamic process - and we are coming from all over the world … And there is no business in it – we all together do it for fun … with help of friends – and hope that audience will have fun too.” is the mission of the group as stated on their website which will tell you all about the group and its work. 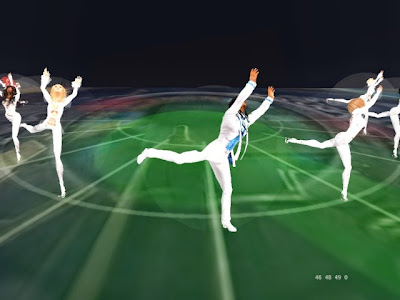 The music for each dance guides the dance itself. Alazi (Alazi Sautereau), the announcer greeted us at the beginning of the performance and gave us directions to help us watch each dance comfortably. She told us that ‘Body and Soul’ is the 15th show by “la Performance” since 2007. And then the opening number to the music of Aretha Franklin began. Various dancers performed in each scene to other music as it went on. There were eight different dances performed in this show. It was well received by the audience as applause broke out after each scene and at the end. I enjoyed every bit of it and hope you will too. 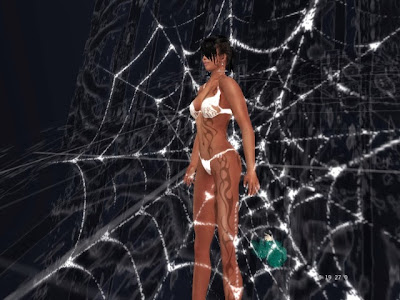 There will be two more presentations on the next Sundays at 2:30 . The website will give you so much information about the group and its history and also the landmark for the next two weeks . http://www.la-performance.org/
Gemma Cleanslate
Posted by Bixyl Shuftan at 6:00 AM No comments: 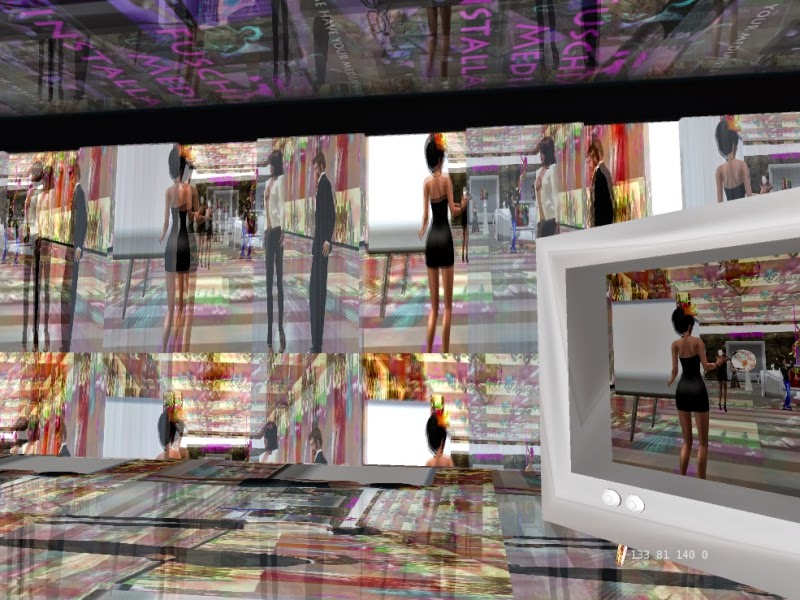 Fuschia Nightfire is a well known award winning machinima artist in sl. She is also a well known artist in real life, Nina Camplin of the UK. She specializes in trompe l’oeil, one of my favorite art forms . She "is interested in challenging the observer's perception of space and creating illusions of faked realities.“  Her work can be viewed on the web and you will find a notecard with all the directions to them.

I was invited to an opening of her new installation at Influence Art Community Sunday. It is delightful and well worth a visit. Be sure to get the folder at the entrance to the gallery which contains directions for media and some goodies to take with you. The media in this exhibit is a mixture of Second Life and real life. Her flashes of color, closeups brightness and subtleties are amazing as they flash across the screens and walls. 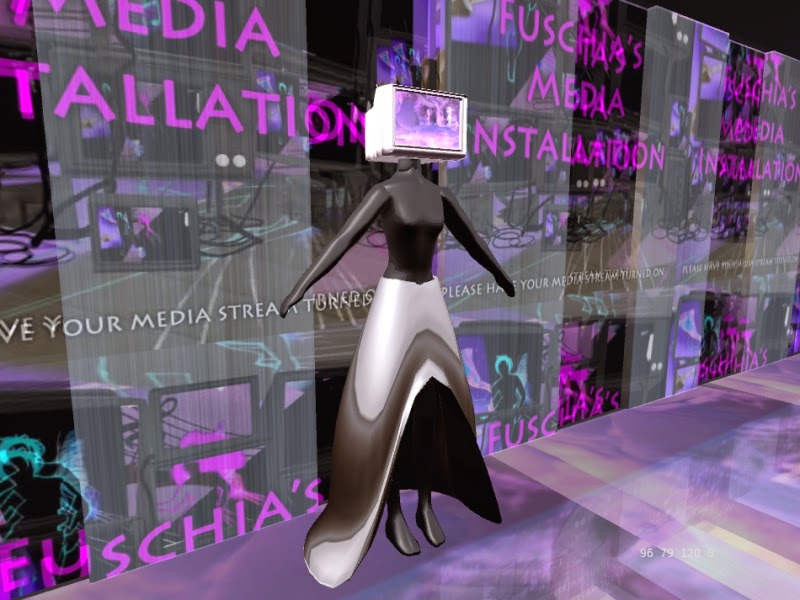 Wolfie Moonshadow is featured in some  of the videos. Wolfie was present at the party and commented, “I have to say this is my most fav video we did Fuschia."  He also appears in his real life person in the particular video as well as his SL avatar. Fuschia said it took a year to convince him to do it.  The artist was performing on top of a TV wearing the media images as were the walls .   It was great fun.
Be sure to get over there to visit while it is open . There are several interactive ways to join in the media while you are there . Look for the dance on TV and get into it! The first video you will see is the opening party.  This is total immersion! 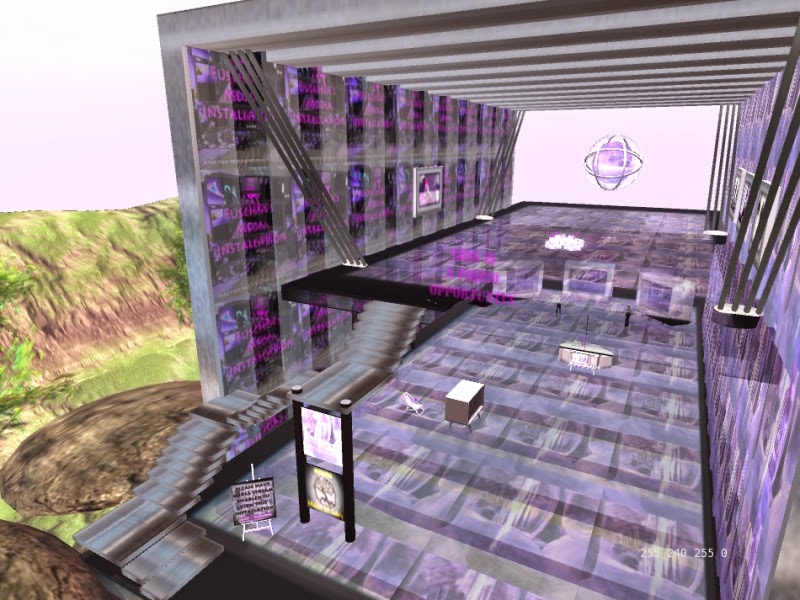 The curators of the exhibit are Yvan Slade and Lana Simondsen Eleonara and the designer is MacKena Soothsayer.
Many of her videos are on you tube . Take a look: https://www.youtube.com/watch?v=ib_LxjvRgKw

To get to the gallery  take this entrance http://maps.secondlife.com/secondlife/Crimson%20Isle/128/128/21
Gemma Cleanslate
Posted by Bixyl Shuftan at 6:00 AM No comments: