A Steamy Mystery at Terradale 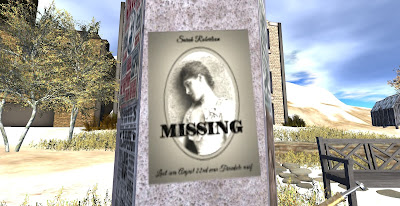 I always look forward to the opening of new LEA regions granted to the artists for a period of time. It is fun to go through them all. I do not write about each one, but choose the ones that really take my attention and keep it. This interesting region really grabbed my attention. It is not one of the sparkly artistic creations, but contains a story. 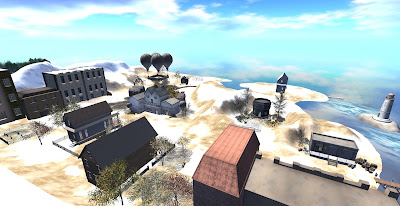 The tone is set as soon as you land in the sim. It is a town that is reminiscent of the old English coastal, or perhaps, New England towns. It has the appearance of a mill town, with homes and factories intermingled and the ocean with its light house in view of all. When you land you will be greeted. 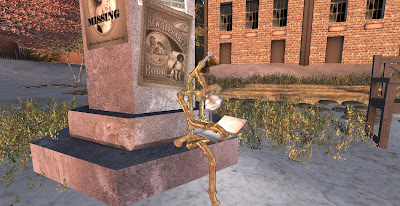 There is an odd piece of pipe equipment looking much like a humanoid type sitting around all over town that contains the story of Sarah.  Be sure to look for him where ever you go. Sarah is missing. I turned from the welcome sign and entered the building across the way. It was an artist studio with workings on the wall incomplete for the most part. I entered the second room where I found a message giver I came to know as Perry Piper. He uttered the words of Sean, “ My Sarah --She was everything to me. My muse, my friend, my partner, my lover. We were one......”

I turned and left and went to the town square and began my search. There I found missing posters plastered to the Town Monument.

There is so much to be seen in each of  the buildings and so much to learn about Sarah’s life as you move through the town.  People who knew her tell the story to you and with each fragment you build a vision of her in your mind. At least I did. I realized that all is not as it seems, and I kept hoping I would find that she had flown the coop and headed to other lands looking for a more interesting life. But that was not to be. To those who knew her Sarah lived a quiet life, enjoying her horse rides and gazing out at the ocean. 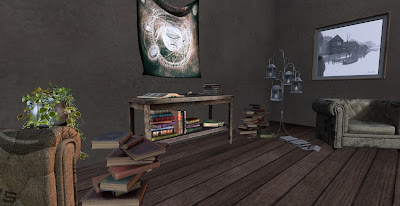 Chic Aeon has created this region and the story hidden within it. His houses are decorated with so many fascinating items to inspect. I thoroughly enjoyed each of them.Each home adds a little to the story.  The commercial buildings are littered with interesting pieces too, including some games to try.bring a friend along with you . There are hot air balloons in the air and I hoped to catch a ride. But no. 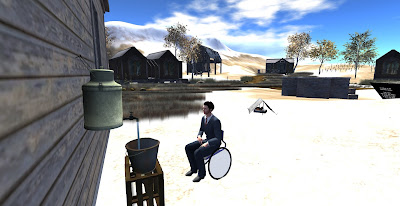 At the end you will know the whole story of Sarah and where she has gone. I was sorry to find the final answer but thoroughly enjoyed the experience of tracking her movements and learning of her. I am not sure whether we would have liked each other if we did meet.

The Town will be there until January . Put it on your bucket list.  http://maps.secondlife.com/secondlife/LEA12/152/92/21

A new month means, for many art galleries in Second Life, new exhibitions. It would probably take a month to get round them all but I have picked a few current offerings of the photographic sort, two new and one ongoing, that are worth checking out.

To begin with, Whiskey Monday has opened with a collection called Alternate Worlds in the Tate-Canning gallery at LEA6. Whiskey's work does not often get aired inworld, so this is a treat. 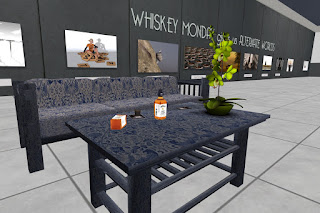 The landing point is fixed at LEA6 and the gallery is over on the North East side of the sim. Walking over there, the visitor can take in some of Dusty Canning's creations. She describes herself as an old-fashioned prim builder, and LEA6 displays a variety of such works, proving that there's still a lot you can do with the humble prim. Not least of these is the gallery itself, which is based on the Tate Modern in real-life London.

Whiskey's latest offerings pop from their canvasses in the sharp white light of the gallery. Whiskey has an instantly recognizable style, surreal and yet instantly accessible. This series of perfectly composed situational self portraits are wry and, at times, challenging. I found most of the images either resonated with experience or made me see things in a different way.

On to The Bailywick Gallery on Corsica, which is hosting four artists with black and white photographic work through August. I arrived just a few minutes before the sun set and enjoyed the long light falling through the huge windows that make up the front of the building. The landing point is upstairs where work is displayed by Lulyboop Resident and Solana Python. 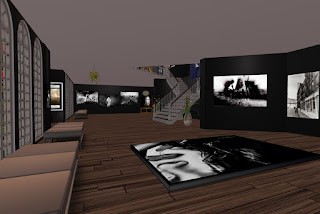 Lulyboop presents a handful of large canvasses depicting moody and pensive avi-portraits in everyday settings that seem to tell a story. Her selection here feels highly personal. Luly states in her bio that "Photography in the metaverse is a small daily exercise that teaches me to be happy about what I do."

On the same floor, Solana's work is in smaller format and seems to contrast. Cutting into detail and finding the interesting textures and shadows in her subjects, there's both real-life and Second Life material in the selection. In at least one of the pictures I cannot be sure if we're seeing real-life or SL. By her own account, Solana seeks to open new doors for her viewers and put them in touch with nature and our world.

Downstairs, I looked first at GlitterPrincess Destiny's selection of dramatic scenes from inworld locations. These big canvasses, mostly depicting figures, are on the darker side of monochrome, seeming to exploit shadow more than light. To me they had a cinematic atmosphere.

Finally at The Bailywick, with the light fast fading, KodyMeyers Resident's compositons called for examination. There didn't seem to be any artist information available, but Kody's grunged surfaces and choice of scenes with repeating elements makes for some gritty imagery that seems to burn into the mind all the more for being in monochrome. 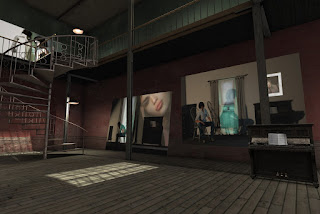 My final destination was Berg by Nordan Art, where LOSS by Senna Coronet has been installed since July and continues through September.

This very poignant exhibition is dedicated to Amona Savira, Senna having been invited to take up a slot that would have been Amona's if she had not, very sadly, passed on earlier in the year. Senna's images are on larger than life canvasses, depicting the same figure haunting the same space and seemingly haunted by the shadow and memory of another. On multiple canvasses the man seems listless and trapped.

On reaching the second floor I realized that the exhibition setting itself, as well as bing dark, close and almost claustrophobic, is filled with the props and furniture that are also seen in the pictures, setting up echoes between the space and the work in a way that intensifies its effect. The whole exhibition has a felt impact and is well done.

Klaus Bereznyak
Posted by Bixyl Shuftan at 6:00 AM No comments: