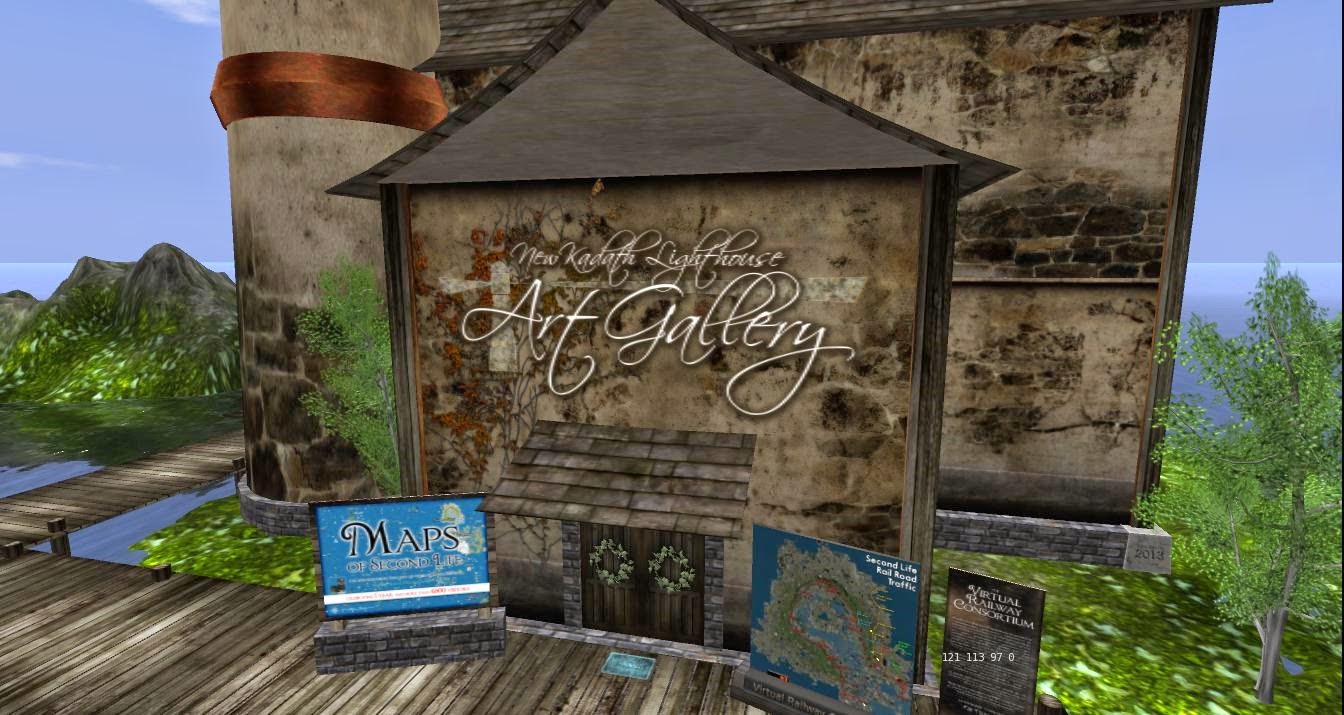 A visit to New Kadath Lighthouse Art Gallery was a pleasure. The walls are covered with maps from all times in Second LIfe, some going way back to the beginning. I love maps, since I was a kid in school, I have always wanted to read maps. One summer for a part time job I worked at an automobile Association preparing trip maps for travelers . This was before global positioning systems . So to see all the maps of SL in one place and the progression of land and sea is so interesting. The maps of the railroads are there, as well as map of aviation routes  with airports pinpointed. The Blake Seas are there along with map of pirate areas. Bay City Maps were on one wall. There is a section showing the early holdings of the millionaire Anshe Chung.
Next to the maps is a very interesting description of the origin of the areas in most cases.  In an alcove there is Aley’s globe of the SL universe. In the same alcove is a very ancient map done by Jack Linden tells his history in sl, serving as a land management “aspects” and a fond liaison with residents until 2010 and another by Dyne Talemesca who first named the Sansera continent. 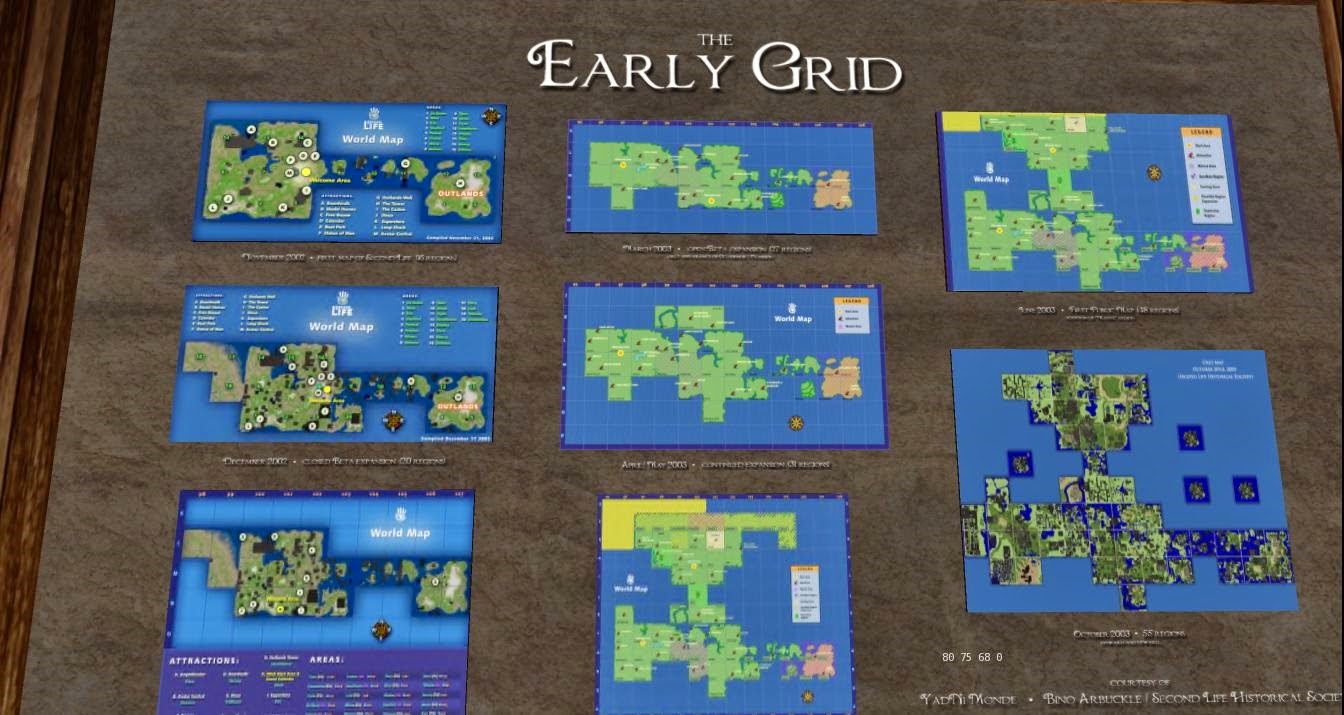 On one wall in another room is the history of Magellan Linden, the intrepid explorer who discovered many pre linden locations of Nova Albion. I asked Professor Juliana Lethdetter about the maps and how long they would be there and her answer was “The entire 'Maps of Second Life' exhibit is permanent.  When I first opened it in 2012, I thought it was going to be temporary, which is why the Destination Guide says it's 'limited time.'  But so many people liked it so much, that I decided to expand it instead of taking it down.  Currently everything on the First Floor and everything on the Mezzanine is part of that collection (plus a little bit of spill-over on the Second Floor, too.)  I move the pieces around as necessary due to limited space, and I do sometimes make changes or swap out old pieces for new, if I feel it improves the exhibit.  But generally what's up on the walls stays up." 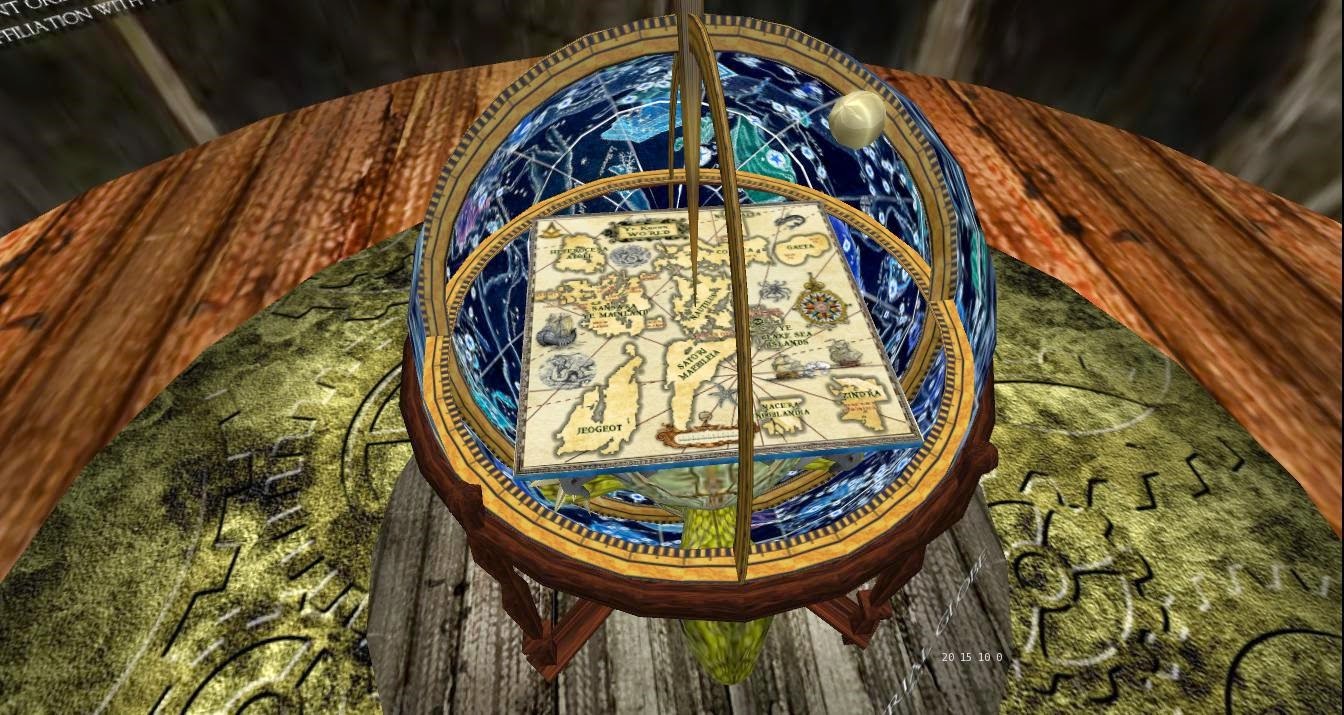 There will be some art exhibits on the second floor from time to time. Right now there is one set of ink sketches by Juliana. There are so many fascinating bits of history in these walls at New Kadath . I recommend you make a visit especially if you love maps and history. You will find so much there.

Attack on Titan at Grenadine 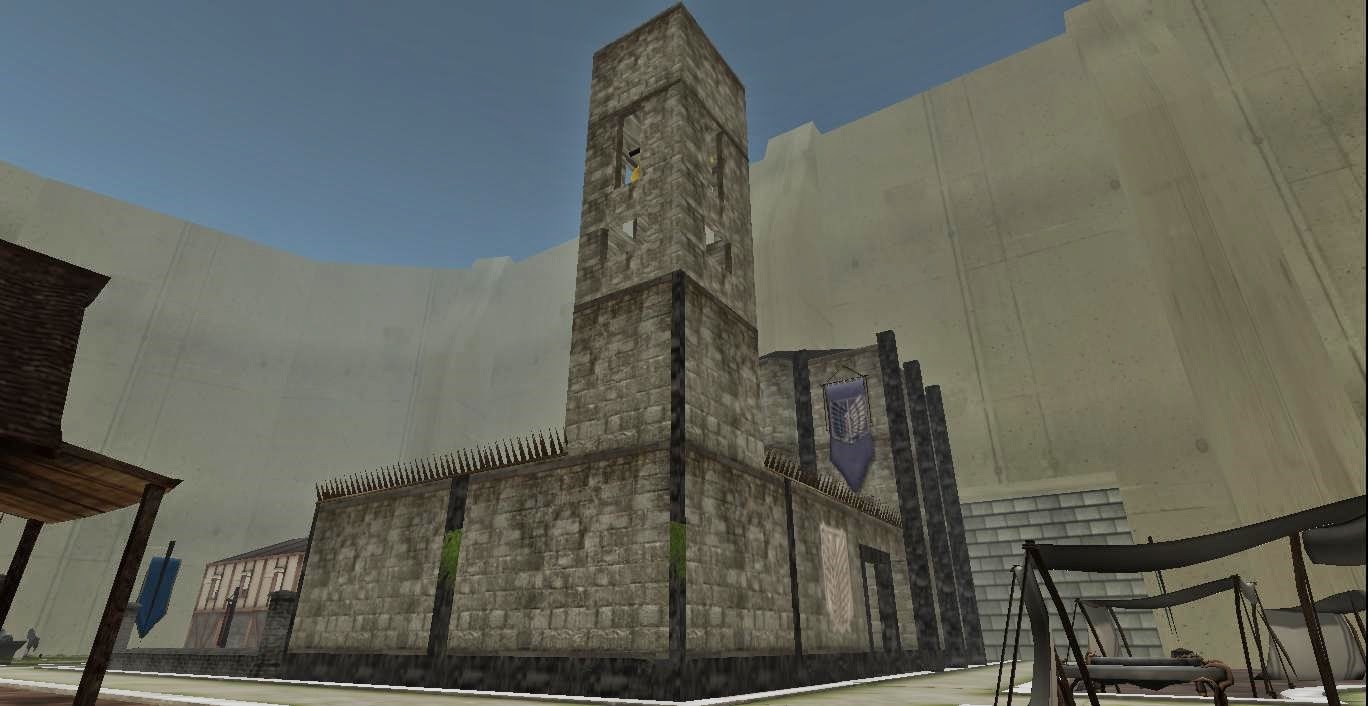 While an Attack on Titan sim was already written about, a while back, this sim is much different, and deserves its own article. While the other sim, Edelweiss, is very well built, and is based off one of the cities of Attack on Titan, Grenadine is much more than that.


Yes, the city on this sim is much smaller than Edelweiss, I feel it is much better. Rather than having just a bunch of blocks, textured to look like buildings, without an interior, Grenadine's Wall Avarice is filled with actual buildings. There are a few houses, that people can rent, a library, an infirmary, a market, even an MP castle, and a fort. 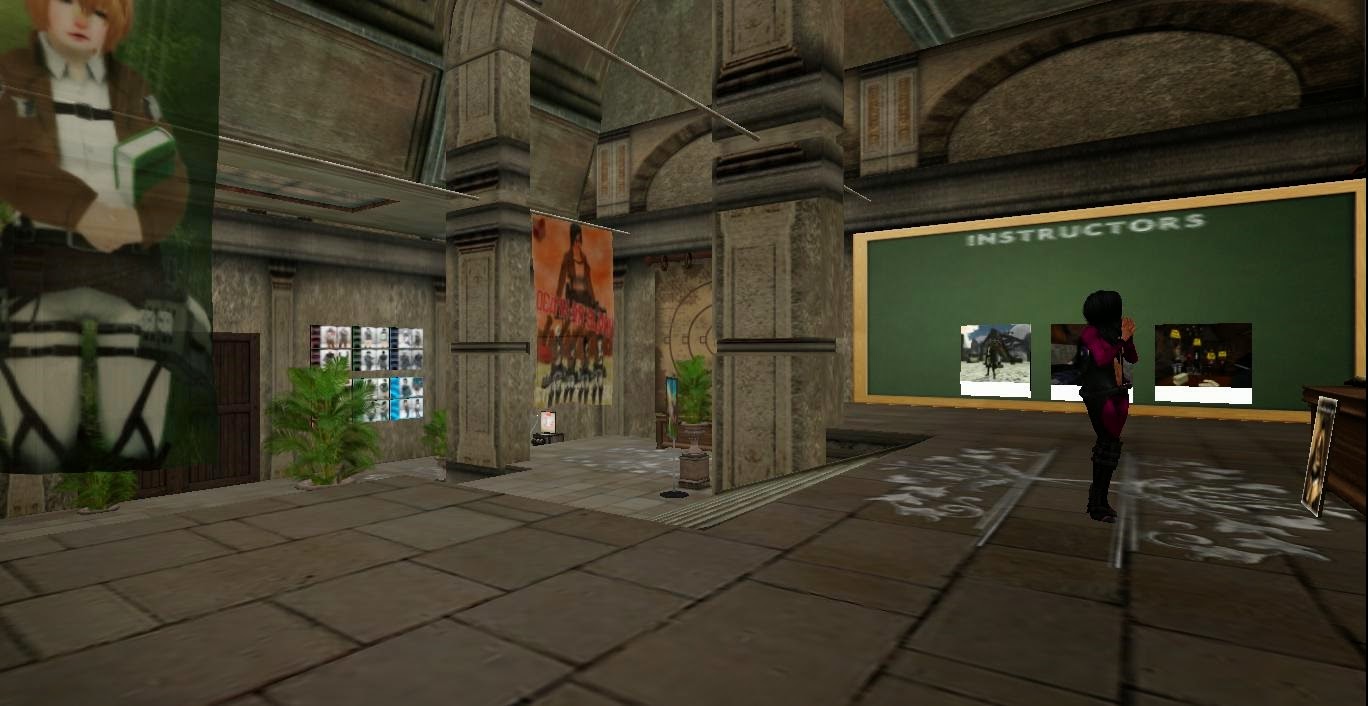 However, it doesn't just stop there. There are other areas too, including Caravan trail, Travel route, Training grounds, and even more areas, used for roleplay.

When you first show up to the sim, you will be in a little area called the Recruitment Center. Getting started is really easy, and quick too. If you want to join the military, you can get your gear from the wall, that has the big poster of the gear, with the two machines in front of it. To sign up for either civilian, or military, simply go to the top of the steps, and click on the one you wish to join. Then fill out the app, and send it in. It's quick because they usually accept you within about 24 hours. 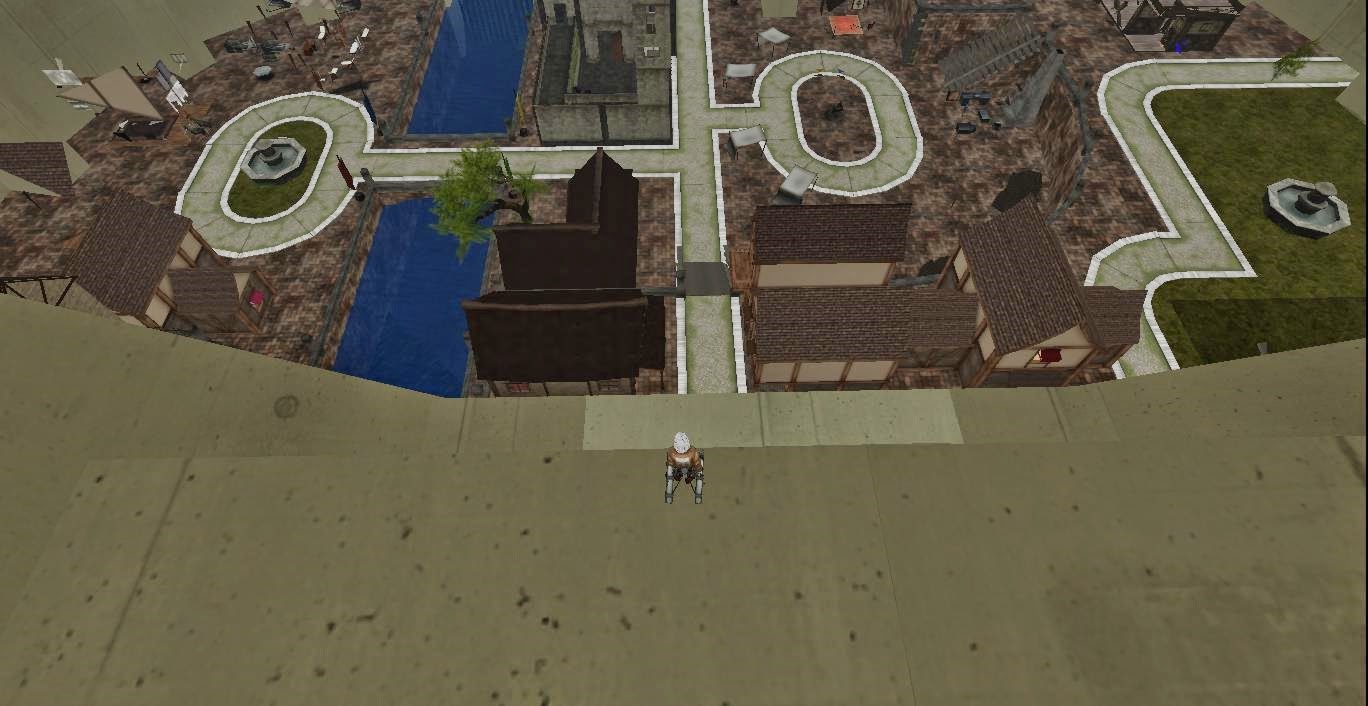 If you chose to be a civilian, and were accepted, go to the teleporter, by the door at the top of the steps, and go to the Wall Avarice. If you chose military, then go to the training camp.

In the training camp, you will find a few buildings, a large tower, two red circles, an area with a bunch of titan dummies, a lantern course, and a 3DMG trainer. Each of these is important, for you.

In the military, you always start as a trainee. You must finish your training in order to earn the rank of private. After your training is over, you will earn the right to choose which branch you proceed to. There are three branches, but most cadets, upon graduation, only get to choose between two of these. The two that everyone gets to choose from, are Garrison, and Scouts. If your grades are good enough, you may get the choice of joining Military Police. 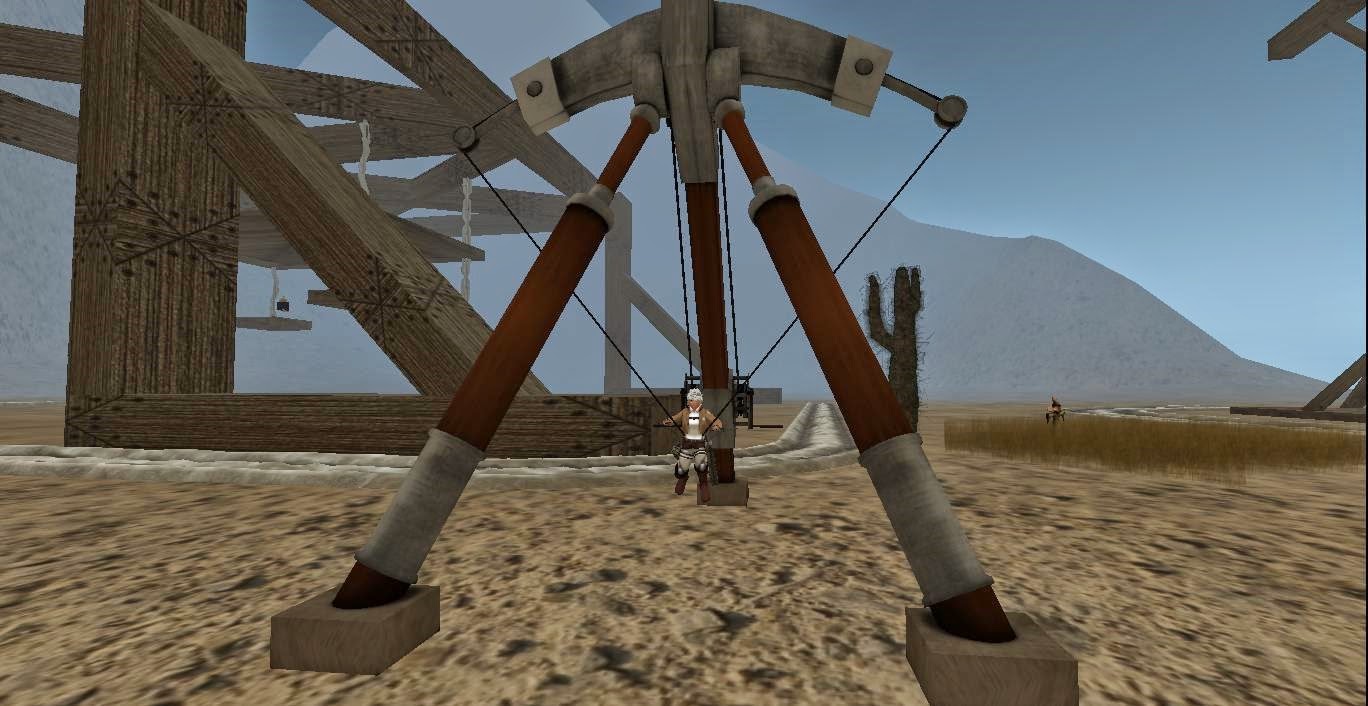 Back to the training grounds now. In order to graduate, you must pass nine phases. and your final test. The first phase is very simple, and very basic. You must use the 3DMG trainer, and succeed. Once you've succeeded, you must then go to phase two, which is putting together your 3DMG (don't worry you just rp it out), and learning to use boosts, and zips. Once you've finished that, it's time for phase three, learning how to kill a titan. You must go to the titan pit, and kill as many titan dummies as you can, without dying, in three minutes. If you die in phase three, your score is reduced by five. 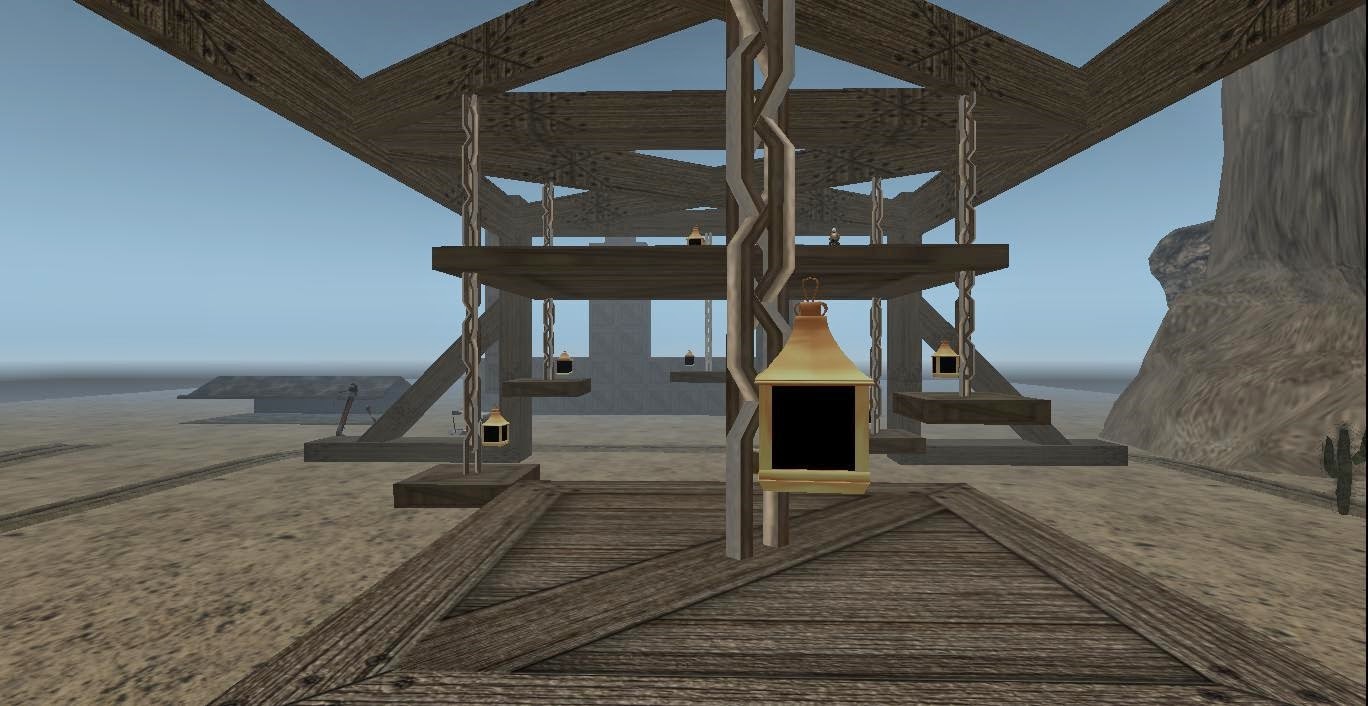 After you've completed phase three, phase four takes you to the lantern course. You must touch all the lanterns, before time runs out, and you can only use boosts, no zips. If you wish for a challenge, my time is 18 seconds, why not go and try to get a better time? Then, it's time for phase five, "The Tower of Death." You must use thrusters and zips to propel yourself around the tower, five times. Phase six is seriously the easiest phase there is. It's simply a physical, of sorts. Then once you've gotten that far, phase seven really pushes you. You must kill 200+ dummies, within a week. After you've done that, it's time for good old phase eight, hand-to-hand combat. You must get into a fighting ring, and perform hand to hand combat with an opponent (don't worry, you simply rp this out, using a roller).

Then it's time for the final phase. Phase nine is a class about titans, and everything people know about them. Finish this, and you get to go to your final. For your final, you must put everything you've learned, to the test. You must kill a titan (don't worry, you will be taught all about that in phase nine). Of course, you don't really need to do these in order. I mean look at me, I did phase eight before any of the other phases, and I passed with flying colors. 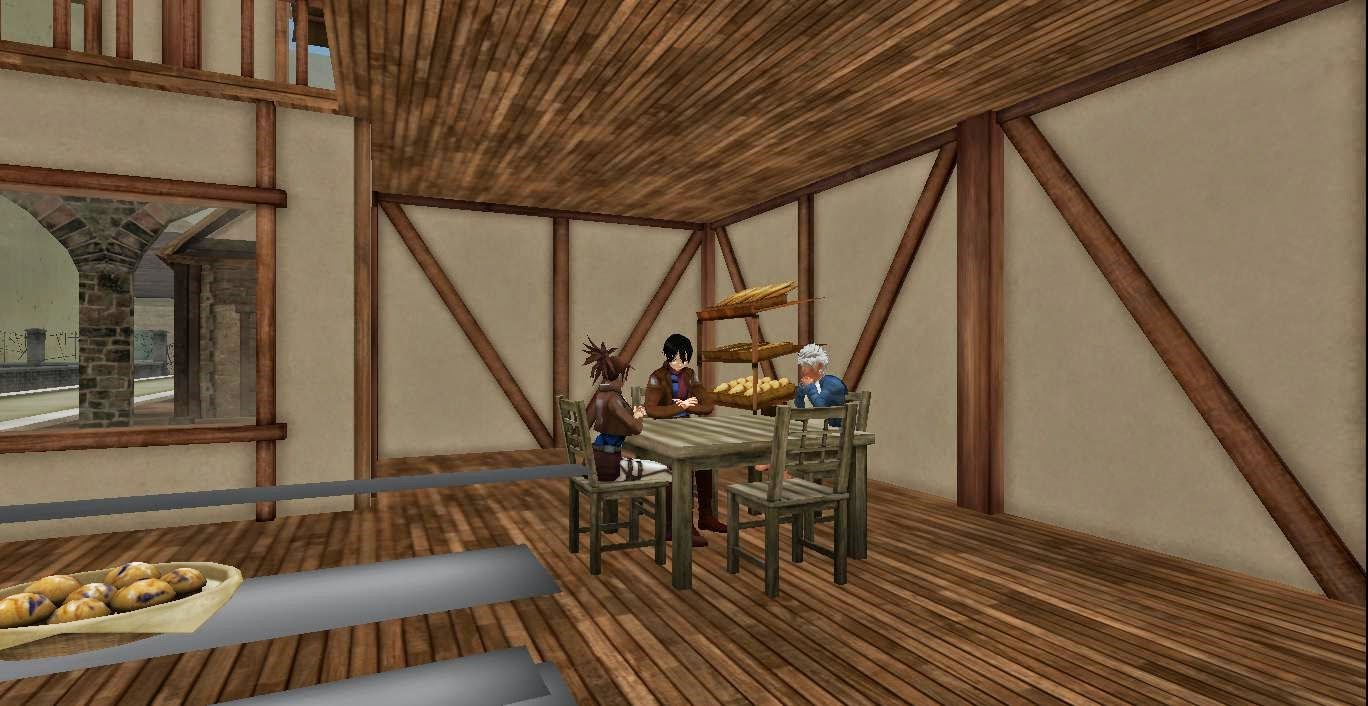 Don't get scared though, I mean my character is a 4 ft 6 in tall, 13 year old cadet. You have nothing to be scared about. Well, unless your instructor loses his mind (trust me, it happens).

All in all, this sim really is an awesome sim, as it uses somewhat of the same training methods as the show/manga. If you love Attack on Titan, you want to know what it is, then come to this sim, and have an awesome time.

TheonlyJohnny
Posted by Bixyl Shuftan at 6:00 AM No comments:


Arcadia Asylum, the mere mention of it, gets a lot of people excited. Not only is it a store with a huge selection, of awesome products, it also has the best prices in all of SL. Freebies as far as the eye can see, and even further. 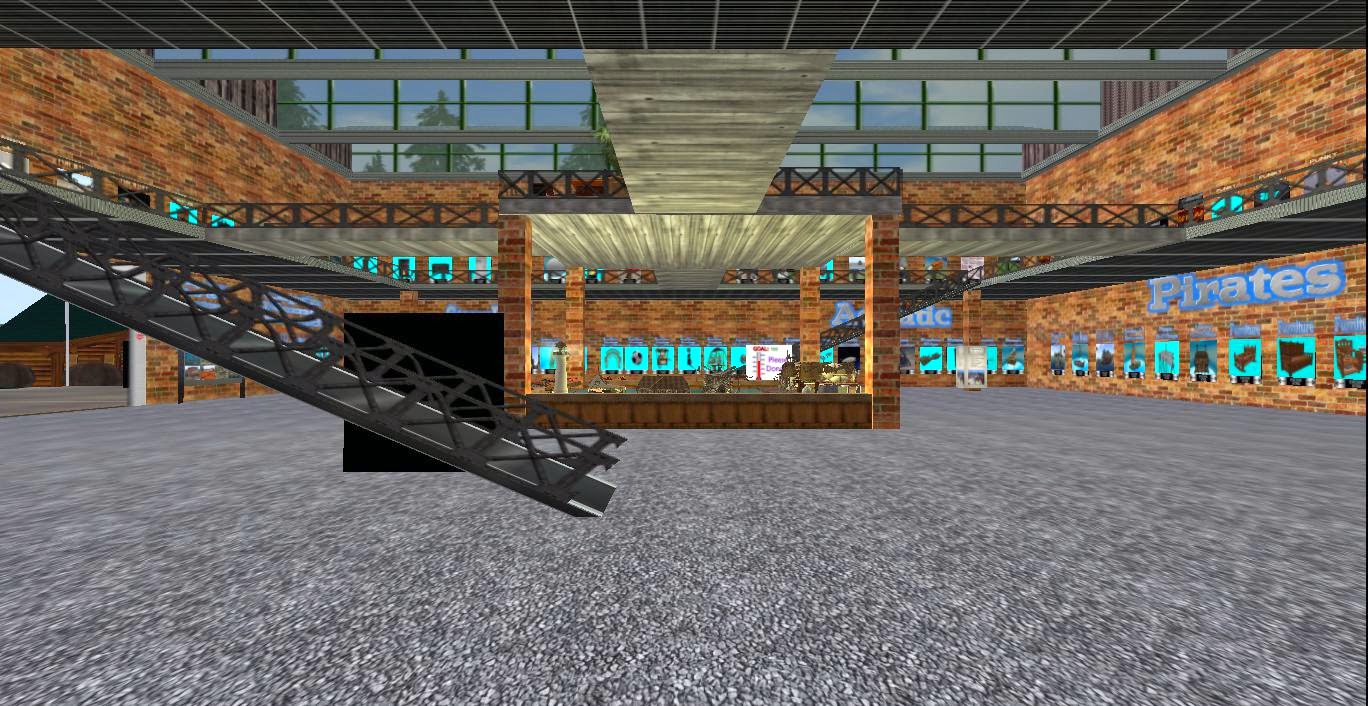 To most people, a freebie means some half finished sloppy mess of an object. However, these freebies are completely different from other freebies. These could be sold for a very high price, yet their creators choose to sell them as freebies.

When asked why, Aley, one of the creators, told me that they are freebies, due to the fact that she doesn't want to deal with sales clients again, and she is a supporter of open source development.

I asked her if there was a set team that made the items, in which everyone had a specific part to play. It turns out, there is no set part to play. One of them may make it, and have someone else script it and texture it, or they may do it themselves. 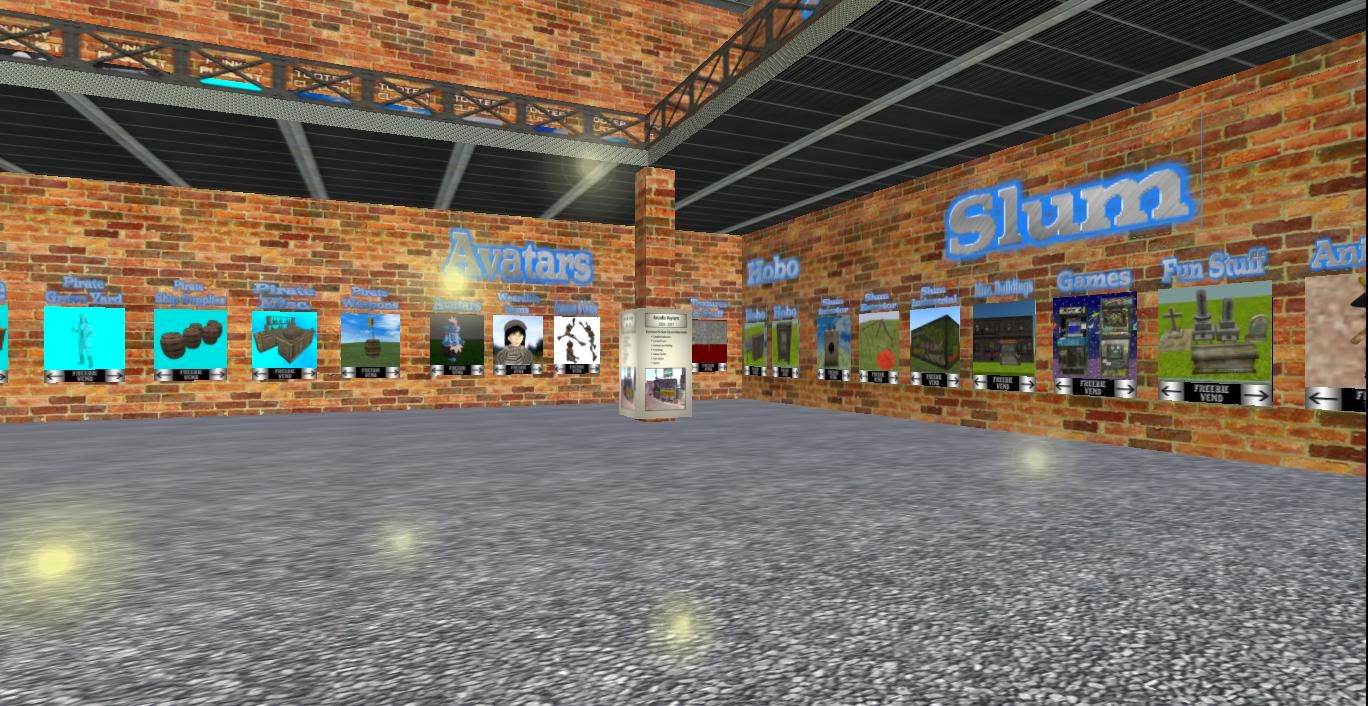 When asked why they started making freebies, they easily answered this by telling me a bit of their history. They did not start in Second Life. Before they joined Second Life, some of them were already making models, and they simply continued, when they joined SL.

Though the items may not look as sleek, and be as expensive as most of the items in SL, they still have something not many other products have. They have customers who are always checking back, every so often, for something new. They have a team of builders at their back, and they have a bright future ahead of them.


TheonlyJohnny Resident
Posted by Bixyl Shuftan at 6:00 AM No comments: