My Take on SL11B, By DrFran Babcock 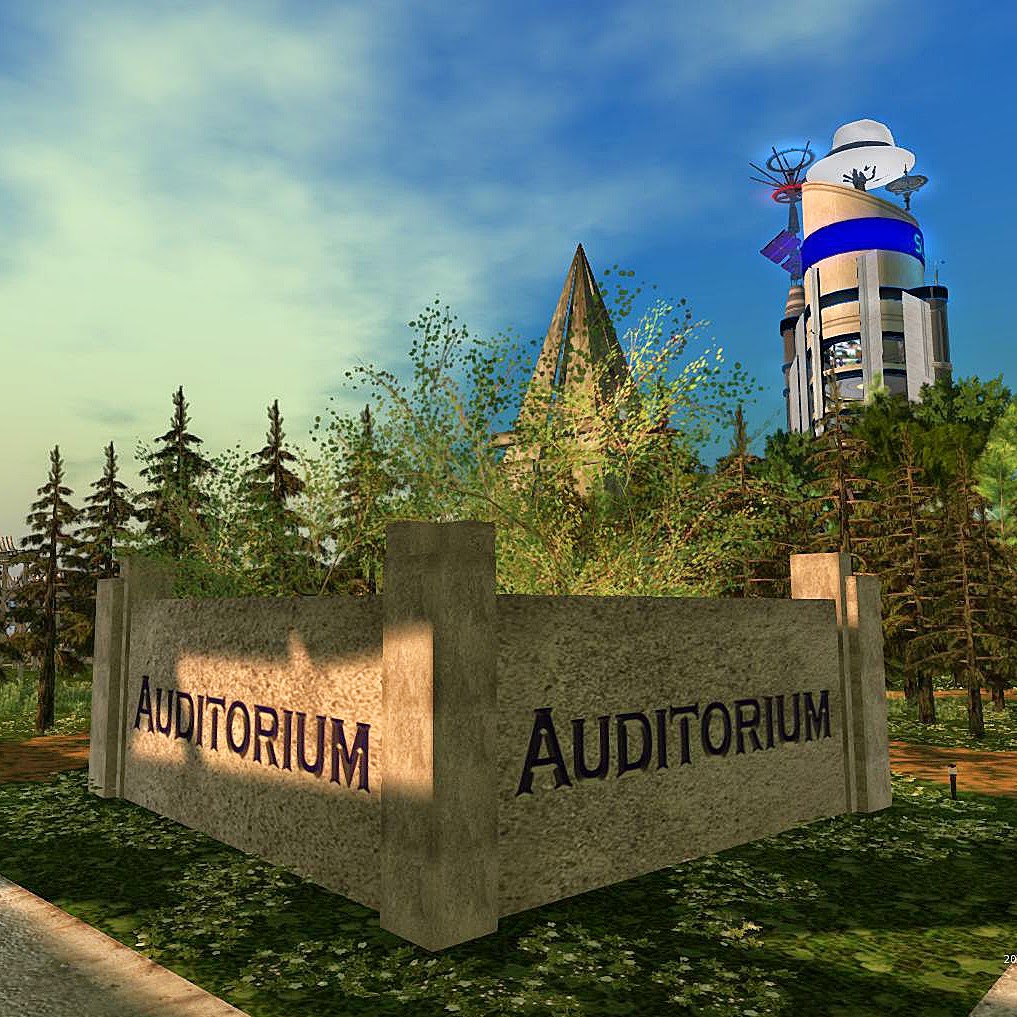 This is going to be a completely subjective view of the Second Life Birthday party. I have heard many people put down this event for a few reasons. First, and somewhat valid, is that last year was a landmark anniversary, being the tenth year celebration, making this year a little less shiny and exciting. Second, there is such a dearth of Lindens. My first SL Birthday was the third. The heady thrill of wandering the exhibits and going to live events was one of the reasons I am still here. I sat next to Torley Linden at a concert, and we chatted amiably. Philip Linden was everywhere, and was as enthusiastic as any of the other residents. Those were new frontier times, even though I wasn’t an old-timer. I suppose I sound like an old lady with a bad case of nostalgia. However, my love and passion for Second Life™ has not decreased at all. If anything, I care for it even more.

It’s impossible to deny the buzz created by the announcement that Linden Lab is working on a next generation virtual world. I think that some of this has had an effect on the usual festivities along with the two points I made above. I will not comment on this now; I want to share with you the builds and things that I enjoyed. Please remember that these are my views, and reflect my wholly subjective take on things. 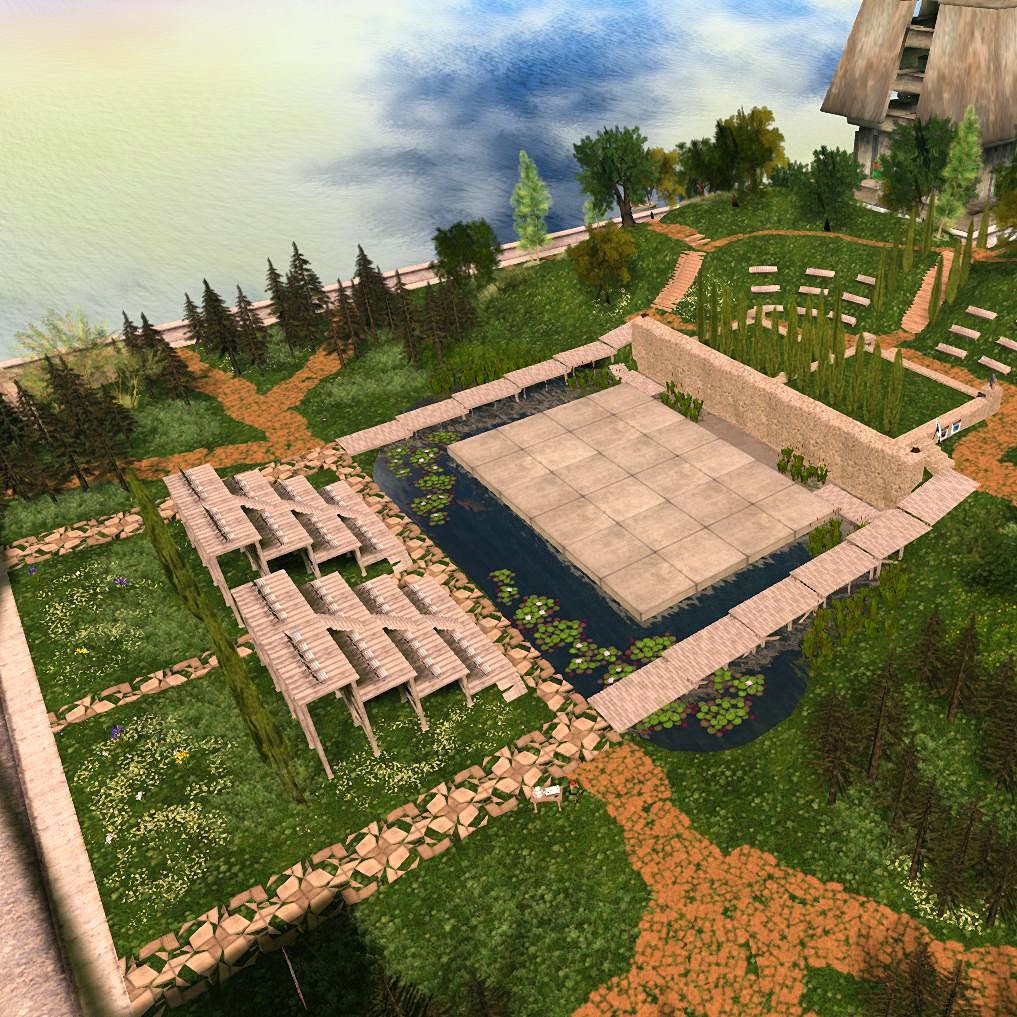 I find that builds that are simple, yet deceivingly detailed are the most pleasing. Pygar Bu’s build for this year’s auditorium blew me away. On the surface it looks just like a peaceful glade with flowers and neutrally colored stone elements. However, the more you explore and look, the more you realize how much thought went into this spot. It will never steal the focus from the interviewers and interviewees on the simple, stone slab stage. It might not even be noticed by most, because it fulfills its utilitarian role of being a place for folks to sit and watch. Take some time to wander around and enjoy the care that went into placing the ground cover in layers, so that the three-dimensional effect is enhanced. It’s hard to write about things that are so visual, but I hope you understand how entrancing I find this build. It really is my favorite. 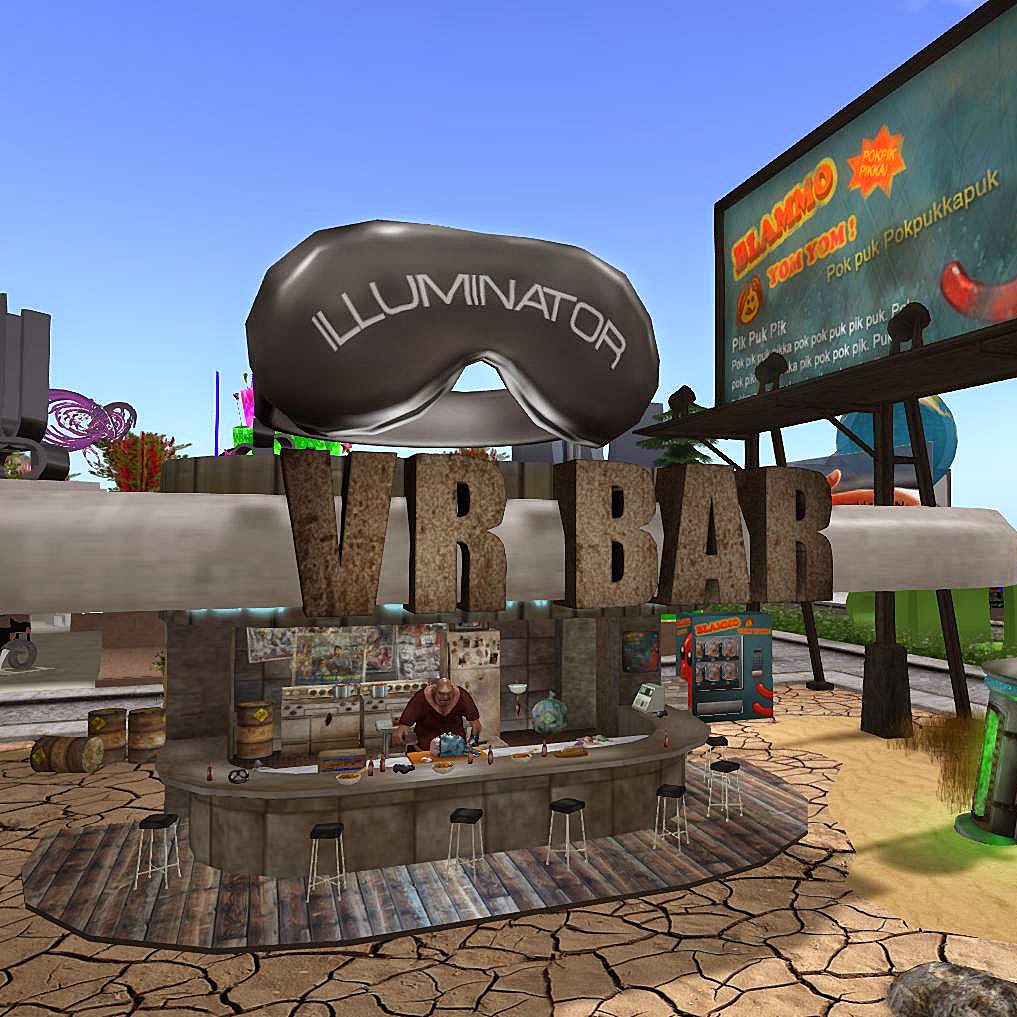 I happened upon Snail on a Virtual Razor Blade by accident, as I wandered the roads of SL11B. I couldn’t find a notecard that explained the build, and all the signs on the parcel were written in gibberish. The build is the collaboration of Liz Venenbaum and Tesla Miles, and depicts a giant virtual reality headset atop a gory bar in which the beautifully rendered bartender is axing a brain open for the customers. There are vendors that give away the Blammo Yom Yom gift pack, that when opened, reveals a sculpture of your last meal there: a head and brain. Yum. The creators are gifted mesh artists, and the materials and textures used reveal a sophistication usually associated with high-level gaming components. The creators describe it thus: “This is a philosophical and metaphorical art work that delivers a cautionary tale about the potential for a nightmarish VR experience. Inspired by movies like eXistenZ, The Matrix, Inception, and The Naked Lunch.”http://maps.secondlife.com/secondlife/SL11B%20Enchant/231/190/22 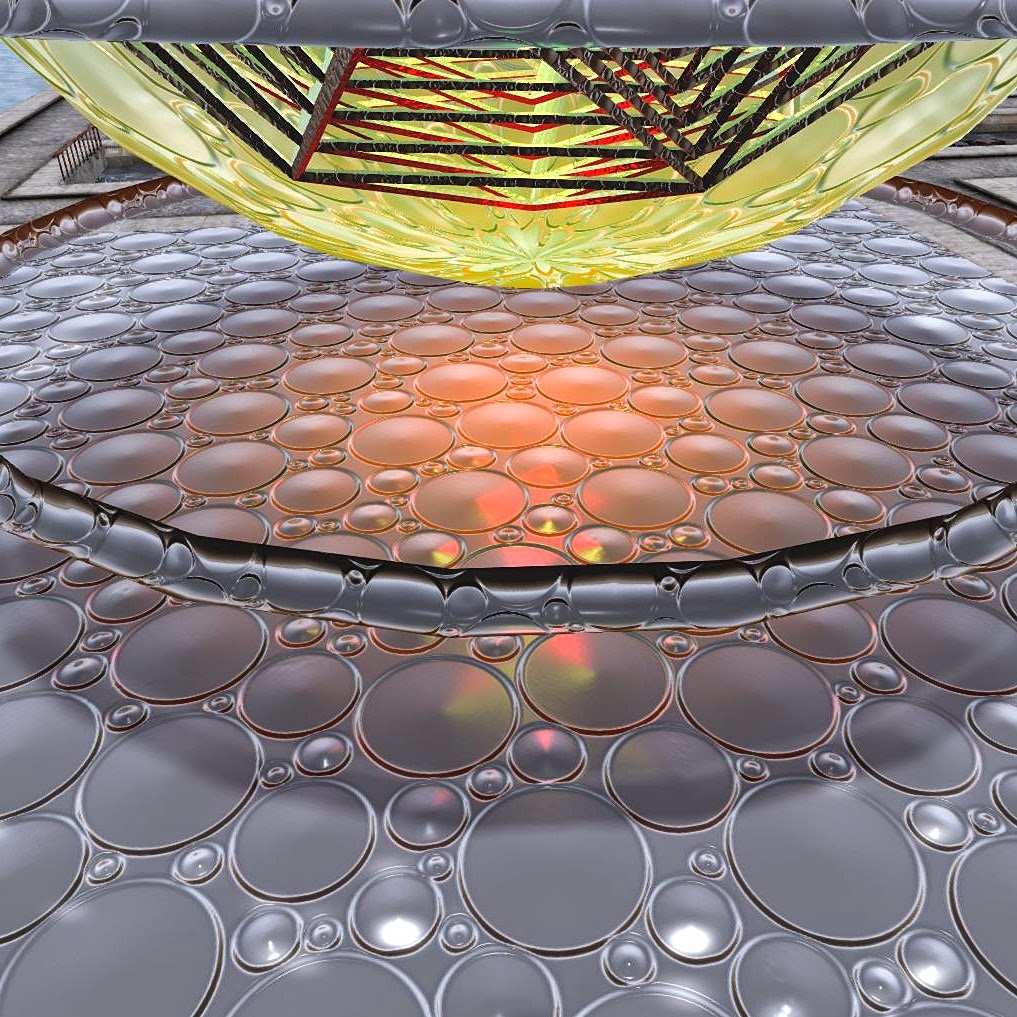 Enhanced mind: http://maps.secondlife.com/secondlife/SL11B%20Enchant/228/31/22
I loved this build for one main reason. Solkide Auer has a way with glass, and his build delighted me. He is Italian, and described his sculpture as: “A mind protected and enhanced by the energy of his affections that sustain and push to give the best.” I am not quite sure what that means, but I think it relates to stretching one’s mind to be the best one can be. Sometimes, I just love the way something looks, and how I feel when I am immersed in it. This is one of those builds. If you like textures, this build will fill you with admiration and envy. 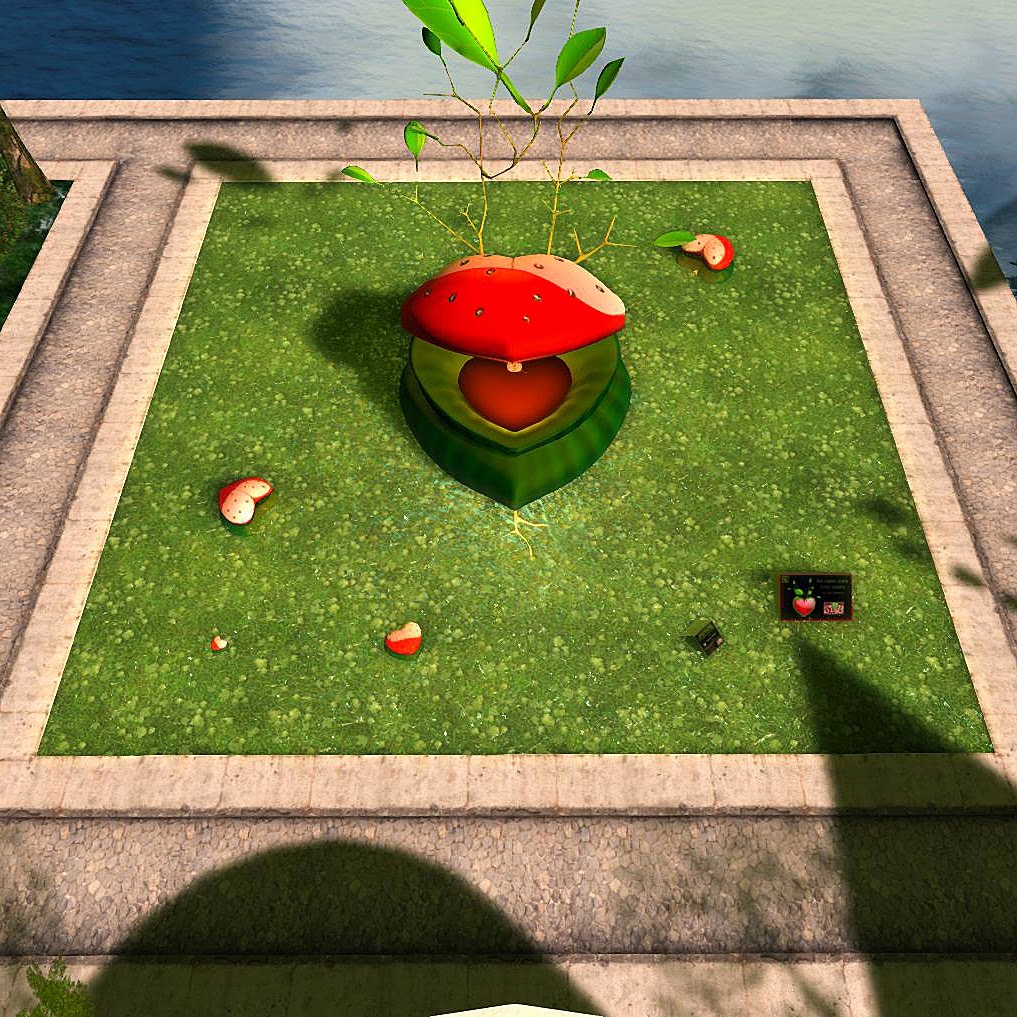 Uan Ciriaptrix’ An Open Core SL11B http://maps.secondlife.com/secondlife/SL11B%20Spectacular/232/196/22
I love anything Uan bulds, and his contribution to SL11B was not disappointing. His work is ethereal and whimsical, and even better, he is giving away a free avatar that blends beautifully with the build. If you become the Spiny Avatar you will lose a ton of weight, and you can still dance and move the way you like. Come and adore at the guitar that resides in a pod at the center of this spare installment. Uan has many admirers, and there are often crowds around his parcel. Go see it before it disappears. 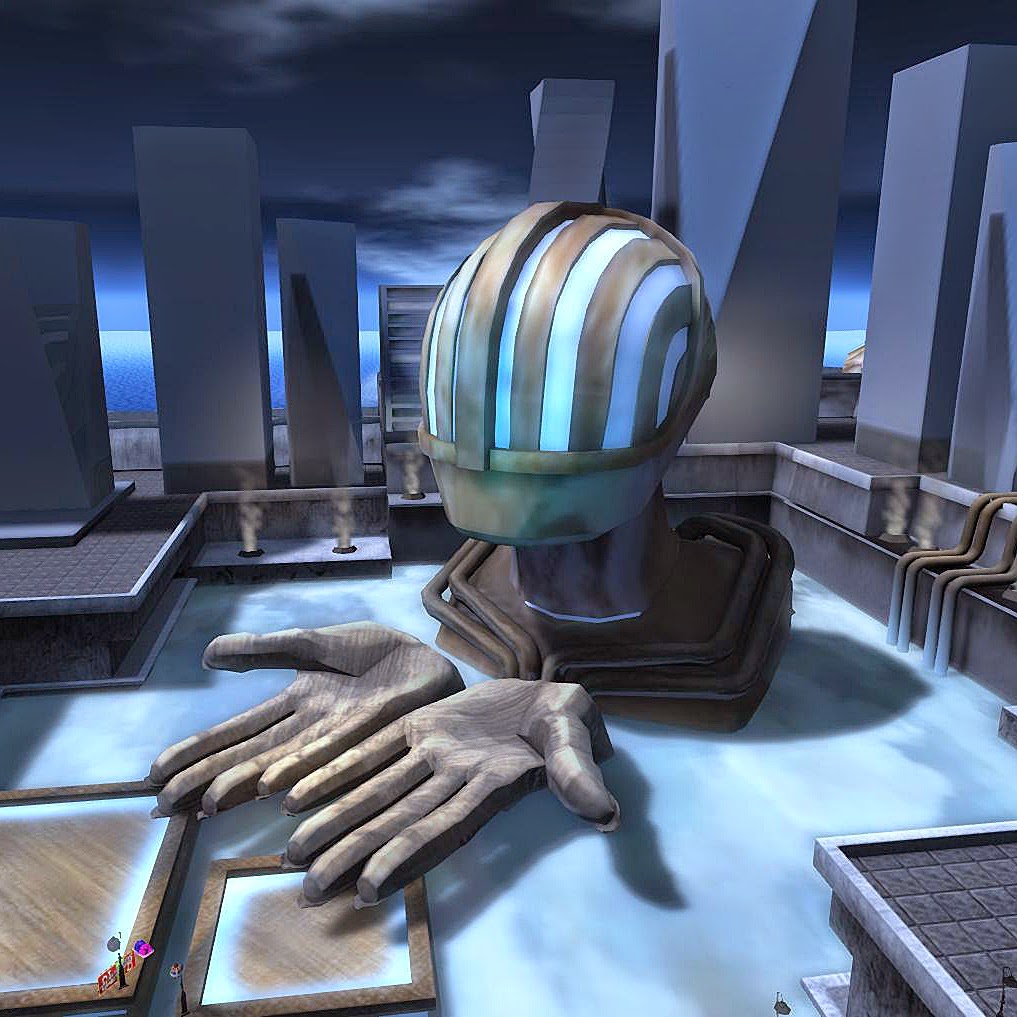 To finish, am going to share two quick pictures and places that caught my eye. The Live Stage, where (d’oh) live performances take place (no more after June 29th), is a stunning build. My only criticism is that the build is too huge for the intimacy of live performers. I attended a live concert by my friend Grace McDunnough, and she ended up hopping of the stage (a giant hand), and coming closer to her fans. She said she felt too distant on the stage. Otherwise, this stellar build creates a subtle blue mood, and serenity. It is a wonderful venue for live performances.

The other quick shot is A Little Dream of Italy (http://maps.secondlife.com/secondlife/SL11B%20Pizzazz/73/ 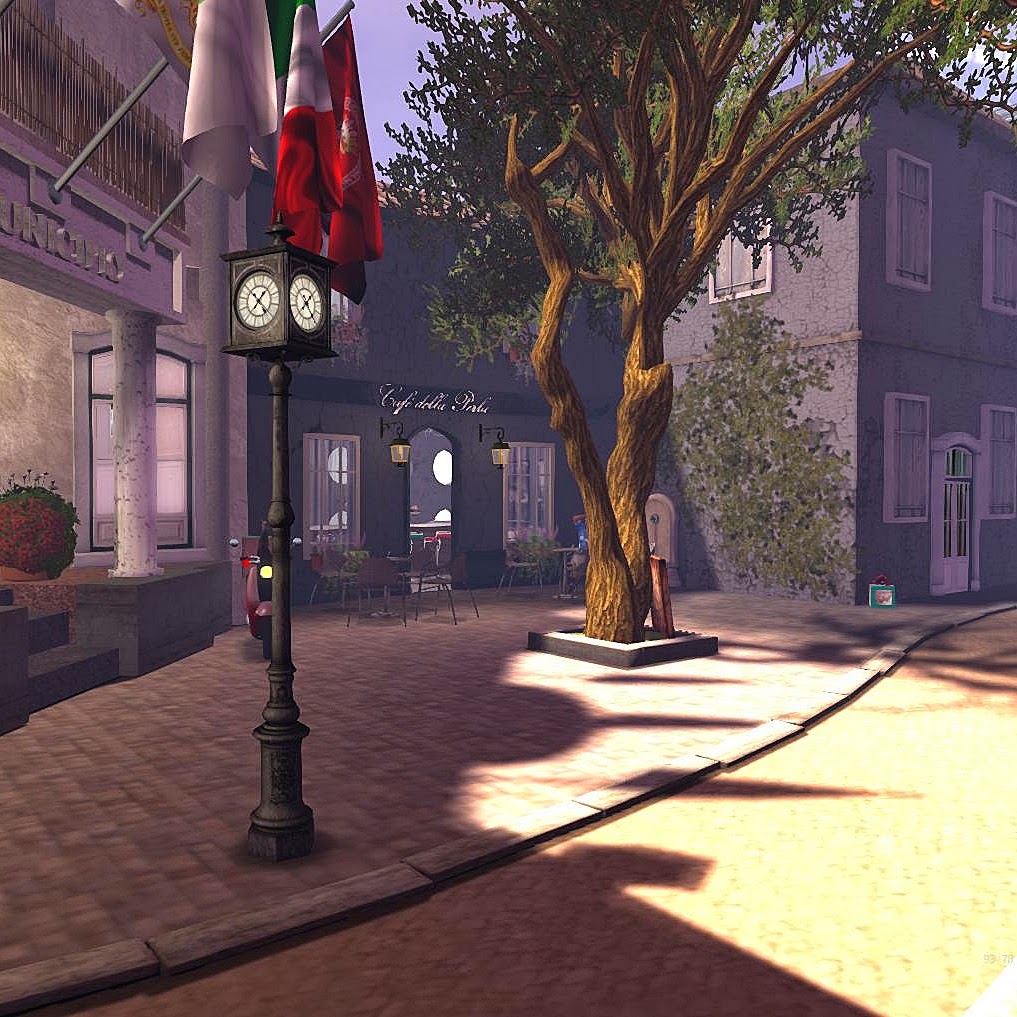 48/22 ), that is nothing more than a sweet little village street. I am not sure why I love it, except that I feel as if I am in Italy when I go there. I suppose that’s the intention of the build. I inspected the objects in the build, and they were from so many avatars, that I have to assume this is a group build. Mission accomplished: This build really takes you away. Isn’t that one of the goals of Second Life™?

So, there you have it. This is just one person’s take on SL11B. There are as many reviews as there are folks in SL. The entertainment may have ended after June 29th, but the builds remain until July 9th, so you can still take in all these sites. Enjoy, and happy birthday Second Life™.

DrFran Babcock
Posted by Bixyl Shuftan at 6:00 AM 1 comment: