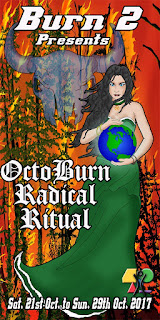 This year's theme for the Big Burn (or Octoburn) is "Radical Ritual", and it follows the theme and ethos of the recent 2017 Burning Man festival in Nevada's Black Rock desert.

According to Burning Man, "Beyond the dogmas, creeds, and metaphysical ideas of religion, there is immediate experience. It is from this primal world that living faith arises. In 2017, we will invite participants to create interactive rites, ritual processions, elaborate images, shrines, icons, temples, and visions ... The human urge to make events, objects, actions, and personalities sacred is protean. It can fix on and inhabit anyone or anything." (https://burningman.org) 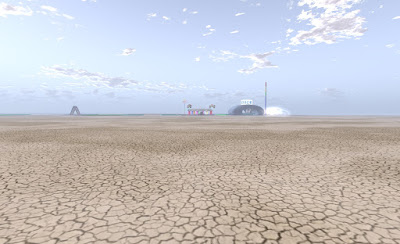 There is plenty to be done in readying the flat, empty desert sims for the imaginative architecture that is to come. Individual plots have been divided and named and roads put in place. The large public features like Main Stage, The Temple and the Gateway are to be constructed. 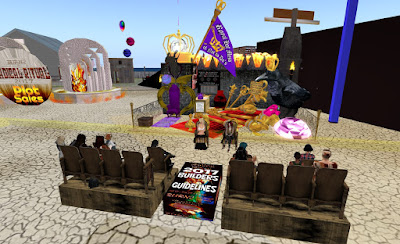 A series of info sessions were held for builders this week before the building plots were handed out. In the coming weeks, we'll see an extraordinary city arising from the desert floor.

Burn2 camp builders consider the authenticity and immediacy of their builds, virtually using the sorts of materials that could reasonably be trucked into the desert, set up and then taken down without leaving a single trace. 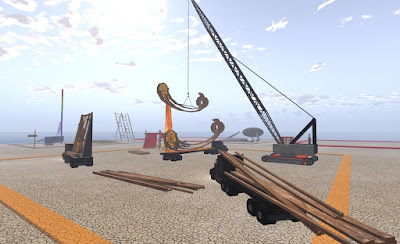 It's not too late to participate in Burn2's Radical Ritual as there are still openings for the submission of single artworks or applications for juried plots. Musicians and live performers can sign themselves up with a performance slot, and a range of volunteers are needed, from community guides to scripters and greeters.

More information can be found at http://www.burn2.org/

Klaus Bebeznyak
Posted by Bixyl Shuftan at 6:00 AM No comments:

While some prefer to stick with just one kind of avatar, some will occasionally change to something else for an occasion such as themed party or a holiday. A number of people I know have collections of avatars, furred, dragon, tiny, and others. I myself have a collection of avatars that I've gotten over the years, though in the past few haven't many many purchases. 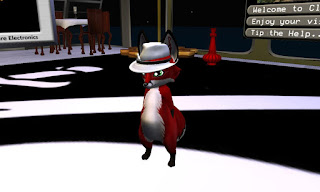 Among the last avatars that I've gone out and purchased was a mesh tiny fox made by Tokushi. I preferred using this tiny to the Wynxworks ones popular at the Raglan community as they didn't need a separate set of dance animations, but could use the same ones as human and furry avatars. This wasn't my first avatar from Tokushi. Earlier, a friend of mine had gotten me one of their "Possat" avatars as a gift. I'd also see a few people in other avatars of theirs, such as their Racoon and their "Qwhilla" which stood out due to it's huge tail. In the words of Second Life Avatar Review Files, while they did some avatars well represented among avie makers, they were also known for making avs with "fantasy backgrounds and personal creations, as well as unique avatars of animals that people don’t usually consider."

Unfortunately, there will be no more designs from Tokushi. On Wednesday, in the Sunweaver and Furry Fashion groups, I began hearing that the company was effectively closing, with everything they had made being sold in one single package. Toki Cure and Racush Cheeky had the following announcement on the store's Furaffinity page: 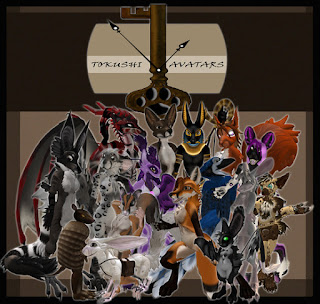 At long last and after much thought, we have decided to give the news that we will be closing Tokushi avatars on Secondlife for now. It was a hard decision to make, as we both have enjoyed creating for SL, for so many years. But time constraints and new projects online and off have made it impossible for us to continue on at a pace we are happy with. We may still offer simple avatars and accessories from time to time when we are able. But there will be no planning or time frame on anything we may create. We will still post here and on the Tokushi group chat when we do have something new.

We are bundling EVERYTHING we have made up until now into one pack for 3000L. This includes all avatars, all accessories in all colours. Some of the older avatars will have broken scripts/bugs, and we will not be updating/fixing these issues. But they will still work for spare parts! Our sim has been shut down, but the pack and any new things we make will be sold directly on the marketplace.

The link to their bundle on Marketplace is  - https://marketplace.secondlife.com/p/The-complete-Tokushi-collection/12567748 . Everything else has been taken down. So if you wanted just one or two of the avatars, that's no longer an option. 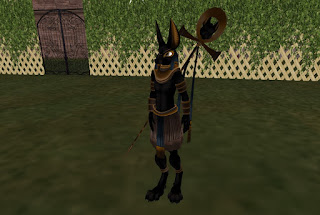 That's a lot of avatars. So what's the catch? The catch, as the owners stated in their press release, is that some of them have bugs and glitches. For instance, trying on their sugar glider, the head was misshapen. Two I tried on, the Anubis (jackal) and Chinese Crested Dog, had the jaws inside the head. I had to bring up my inventory, click on the part in there, and move it to a more proper place by hand. For some reason, when I logged off as the Anubis and came back the next day, I had to readjust the jaw again. I've never had to do that with any avatar before. 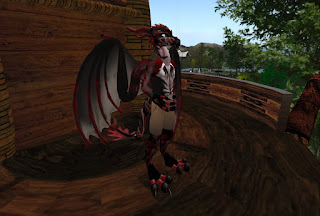 But not every avatar was glitched. Their (anthro) Dragon avatar looked fine to me. Taking a look at the HUD, one could change the eye color, as well as an option to have the tongue sticking out. Smoke was coming from it's nostrils, and there was an option in the HUD to have it breathing fire. When one flies with it, the wings flap. I also saw options for the hands, such as extending the index finger only, and some for the appearance of the wings. Fans of "scalies" should appreciate this particular avatar. 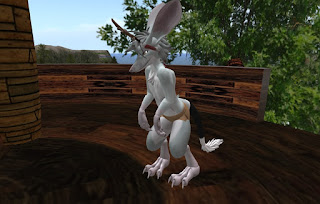 It's notable that most of the several avatars I unpacked, the containers were not to be rezzed on the ground, but worn briefly and automatically detach when the contents were in your inventory. The one for the Bilby avatar looked like an Australian didgeridoo, which when worn looked like you were playing it. For those who don't know, a bilby is a kind of Australian marsupial. And like it's animal counterpart, the avatar has the characteristic long nose and ears. It's AO has it normally crouching on the ground on all fours, occasionally standing up on it's legs. It remains low to the ground when walking about. The avatar also came with a pair of detachable antlers. 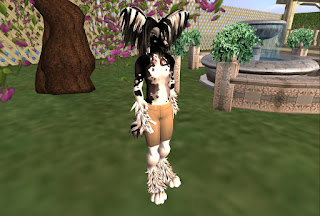 These are just a few of the avatars of many in the bundle. The Second Life Avatar Review Files website reviewed several. Unfortunately, as of the writing of this article, the website appears to be down. One will have to access the Wayback Machine Internet Archive to find the list, which is less than reliable and has a number of missing images. Their Twitter feed, which is still up, has a couple reviews, of the Rhebuk and the Zela.

So if you have the cash, I recommend you get this avatar package. While some may be glitched beyond use, and some will need to be tinkered with, you can't beat the volume for the price. It is a shame that the reason for the deal is that this is almost certain to be the end of the line for the company.

*Addition* I was told by a friend that part of the money made by the Bilby avatar was donated to a conservation program for their real-life counterparts.  So this avatar did more than just stand out. Each one purchased, at least before the company closed, made life for the marsupials it was based on a little easier.