Last week, the Battlebeasts held their launch party, with live music by a variety of residents, hunts to find things, and of course, the Battlebeasts themselves. While I didn't buy any myself (I burnt out on the Meeroos, having about 112 of the things at one point), the event kicked off strongly and everyone had fun all around.

There were some technical glitches (mostly waiting a couple hours after launch before the Battlebeasts were able to be purchased, and an upgrade to the food that was recently released because LL broke something -else- that didn't need fixing) but for the most part it looked like a smooth run. There was also a hunt going on for tiny buyable crystals with extra toys and shinies hidden in them, but my attention was elsewhere and I didn't stay long in any one place to really go looking for them. 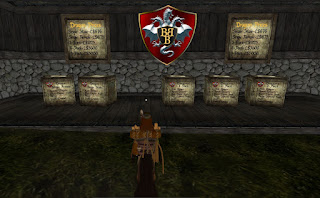 Already there seems to be more things in the works. I saw scattered "Dragon Crystals" around and I was told their use would be revealed in a week or so. I haven't playtested the battlebeasts myself, but I may in the future once more varieties come about. Single dragons cost just shy of 700 $L, with bigger packs costing more (1825, 3600, and 5000). The dragons currently come in six scaled patterns (Orange, Green, Azure, Blue, White and Black, with Blue being more of a purplish hue than the Azure) and six "glass eye colors" (Green, Blue, Red, White, Orange and Purple). I'll be doing a follow up in a few months to see what other things are released or come down the Battlebeast line, and will write about them here. 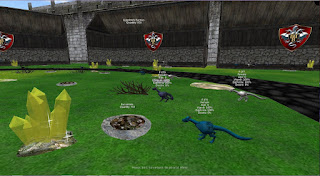 Xymbers Slade
Posted by Bixyl Shuftan at 6:00 AM No comments:

A Mountain , An Agave and a Gorilla

Sunday I was pleased to be invited to an opening of Sledge Roffo’s showing of new art pieces at Studio33 Gallery located at Rockcliffe Conservatory. Monroe Snook is the owner of the Gallery of which The Art Yard is one of several buildings that feature the rich and wonderful creations of many of the finest artists in Second Life.

Sledge 's exhibit is called “A Mountain, an Agave and a Gorilla.” His exhibit will be at the Art Yard until March 16. It is very diverse in the pieces you will see. Sledge told me, “This is some primagery and my exploration of pixel art...still evolving.” The Mountain is a collection of marvelous depictions of his mountain in delicate textures and hues. Each piece is called Suspicious Mountain. You see a sculpture of the Mountain that may perhaps show why it is called suspicious I would say. I believe Sledge zoomed in on his sculpture to find the art that is hanging on the wall.

The Agave is distinctly different art work. It is his pixel art, as is the Gorilla. I found it very interesting to watch some of the pixel art as it changed on the wall. It took a while for me to find the Gorilla but I did.The piece is called “Feed the Gorilla” and there is a large banana ready. Around the corner from the gorilla were my favorite pixel art, four faces or masks of different shades and tones of color that I enjoyed studying.

Be sure to drop by to see the exhibit before it closes. It is well worth a visit to see the variety of talent of Sledge Roffo.

http://slurl.com/secondlife/Rockcliffe%20Conservatory/182/35/526
Gemma Cleanslate
Posted by Bixyl Shuftan at 6:00 AM No comments: