At the Web User Group Meeting moderated by Keira Linden on July 7, Keira had some details on several issues. But the most notable one was about Linden Lab's mobile app for Second Life. She announced that it had been approved by Apple for it's App Store. It wasn't currently in the store as the Lab wants to add a few things before it gets posted. It will just be the iOS version as Android still needs more work.

The app is just a chat app only with no 3D view, for now. For now, one can only directly IM others with it, though group chat should be available later. One can search names on the app, but it can't access notecards (or anything else in inventory). Keira Linden thought it would be particuarly useful for Second Life merchants to keep in touch with customers away from their computers. 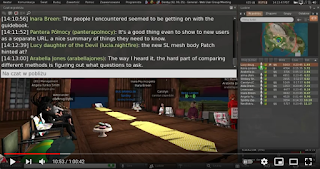 Keira Linden brought it up around 10:45 in the video made of the event by Pantera Polnocy, "I can give you a little info on the mobile app. We do have a version that we submitted to the App Store and did get approved, which was great because we've been having issues with approval. That has all been solved. But it's not yet in the App Store. We have a few more features that we want to put into it before we actually post it up on the App Store. And for those of you who maybe don't know about the app, the mobile app ... we are working on an iOS only mobile app right now. Android is kinda on the heels of that, but we need to get the iOS one out first. We have a little more work to do before we can do Android. And it is only a chat app. It's just a companion app for Second Life where you can keep in touch and chat with people inworld without actually being logged in. So we are working furiously, trying to get the next set of features into it before we actually put it onto the App Store. And I think that is the bulk of what we've been working on for the last 30 days.

When asked it's concurrency, Keira answered, "For the app, we don't have very many people with it now. There's maybe 40 or 50 people who have it. So we don't really have concurrency numbers on it. We haven't done widespread testing on it yet. We didn't have any trouble when we all jumped on with it. But we'll be taking a look at it before we post it obviously. Basicaly what you do is your presence is logged into one of our mobile regions. So you're kind of inworld, kind of not. It's not on a region anyone else can get to. As long as there is space on those regions, which we make sure there is, there won't be any problem.

When asked if the Lab had "any plans for a full mobile viewer with 3D view, Keira's reply was, "For the mobile viewer with 3D view, that's going to be down the road, if we do get there. We have talked about that in the past. It's going to take a lot of work. I know we have some other full 3D viewers out there, mobile viewers out there, and everybody's really anxious to get one. and I would love to have one as well. But it is going to take quite a bit of work, and it is something that we have on our road map. But it is way down the line."

When Keira was asked, "Why can't I use the app at my SL home," her answere was, "So we don't want you out in public because griefers like to do weird things to people. That would have introduced more complexity in trying to decide 'Are you on desktop or are you on mobile?' when you're on, whereever your home region is. So we just have a set of mobile-only regions that, as I was saying, unless you are on the mobile app, you won't be able to get to them. It was just a little easier to do it that way. Obviously, if we go 3D, that's going to change. But for now, that's what we're sticking with.

When asked about "localized chat on the app, ie inworld chat outside of IM," Keira's answer was "No, there's not. It's only IM at this point and time. We're going to be introducing group chat. But there's not going to be any local chat within those regions. Group chat I think is a couple of releases down, we're actually going through the road map and deciding which features are going to go where. Group chat is going to be a priority. Right now, it's just individual. it's just direct IM. We'll have group chat, and then we can take a look at adding, creating a chat room, grabbing two or three friends and putting them into a room."

Keira was asked if the others in the IM region could be seen, and she answered, "You do not see the list of people in the region. Nope."

Then the question was, "How can anyone find each other on this, without already knowing a contact?" Keira responded, "So, the idea behind just having the chat app was, our main precident was for merchants to be able to keep in touch with their customers. So if you have a customer IM you, and you're not online, you have the option for it to it your app as opposed to going to email. So you can then jump in and direct chat with that customer through the mobile app instead of having to log inworld to talk to them. So you'll have your friends list, you'll have (your) group list. It's not meant to be able to find new people to chat. It's meant for you to be able to chat with people you already know. And you'll actually be able to search. So if you know somebody's name, if you know the name of someone you want to go find, you will be able to search it, search for their name, and find them that way."

"I get it," the Linden was told, "but it seems casual chat with new people would seem interesting." Keira responded, "That might be something we can impliment down the road."

When asked if people could see notecards in the app, Keria answered no, "Right now, you're not going to be able to see a notecard in the mobile app, because you don't see your inventory right now. Inventory is a whole other bucket of worms that we are going to need to tackle at some point. It would be cool, yeah, to be able to pull notecards up, yeah."

Discussion on the app concluded at about 19:00 in Panthera's video. There were other subjects covered, such as new Welcome Islands for new residents. But for most, it's the mobile app, which has long been in development, that will be of the most interest.