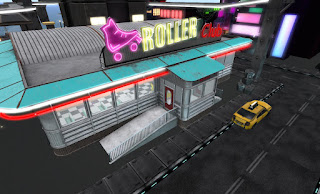 Montecito Bay has changed much over the years. Originally designed with a mid-20th Cenutry feel, since then most of the sim has come to resemble a futuristic city. But recently, one place from a bygone time opened up there: the Roller Club. On Wednesday August 4, Moff (MoffettMephit Resident) announced it's opening.

It's time to get your skate on! Tonight, 7pm SLT, the Roller Club is officially opened! Come by for music, fun and of course, skating! Rental skates are available if you don't have your own! 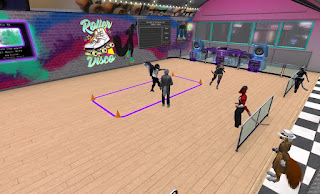 Dropping by, there was a small but active crowd. Moff, in a skunk avie wearing a "Frankie Says Relax" t-shirt, was playing the music as "Super Rockin Magic" DJ Moff. Others were listening to the music, with one ottergirl, Emmy, skating around. The skates were available on a counter to the right of the entrace (walking in), with three choices available: white, black, and tan. Next to that was a currently unoccupied DJ booth and three inactive tip jars - Moff was playing tunes on the house. There were a few posters on the wall, and a Pac-Man arcade game.

Over time, others dropped in. At one point, Moff announced, "By the way folks, I found the real-life model for this rink!" He then put up the weblink to the Dreamland Margate Roller Disco in Margate, Great Britain, "Clearly a place Moff must visit one day!" Twocoin commented, "Oh look at that-that. Even has the name of Moff's favorite skate song on wall!" "Yes it do!" 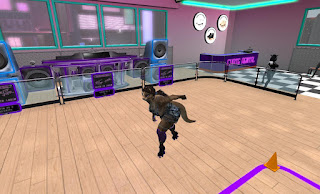 At one point, Moff joined Emmy in skating around. Moff was doing just fine. Emmy usually did well, but once in a while took a tumble. But the ottergirl didn't let the occasional stumble stop her. She got up, dusted herself off, and resumed.

Eventually came Nine o' clock, and the scheduled end of the event. But after the planned last tune, Moff wasn't quite ready to call it quits, "Would anyone complain if I played just, one more song?" He then grinned, "Cuz this last song is about Moff." He then started playing "Don't Cha" by The Pussycat Dolls, "... hot like Moff ... " Emmy responded with giggles. And finally the song ended, "That's all I got for tonight," Moff told the crowd, "So! Thank y'all for coming to this soft-open! I will fix the booths and - " Then Emmy placed a chocolate on his nose. Moff reacted by crossing his eyes, "....uh...uhhhhh uhhhhhhhhh ..." He then flipped it into his mouth, "Oh Emm Gee!" Emmy giggled again, "Hehehehe!"

"Anyhoo," the Dj finally announced, "thank y'all for coming out tonight. Great seeing ya. Magic Moff is gonna sneak on out for the evening. Y'all have a great night!"

The Roller Club would once again have an event on Wednesday August 11 at 7PM. Join the Montecito Bay group to keep notified of events.