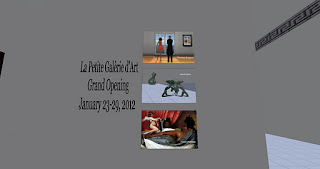 Since I was out of town I missed the grand opening of the new gallery which is owned by my friend Mistyowl Warhol (MistyowlDesigns). I went over to Tintefal to Misty’s Haven to see the new gallery. Misty says “I met two gentlemen on Second life, each a "photographer" in SL. Both photographed women and displayed females but in a positive way, showing the beauty of women and their strength. It was refreshing to see their concepts and something I wanted to promote. This is how the idea for a small gallery was born.” 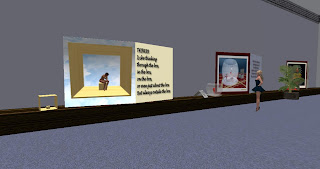 There are three photographers showing at this time with more to come ” Later she plans to have some more of her photos, both SL and real-life exhibited and for sale in the gallery. In real life, she is known for her photographs of the famous Route 66 in the USA and the people she has found there. Mistyowl has some of her own photographs called “Framed Thoughts.” She says she takes her ideas and creates them into scenes for photos.

One of the other artists showing works there is Herman Bergson, whom you know as the philosophy Professor. Herman enjoys taking pictures of women in SL and then creates photographs that tell a story without words. He says, philosophically of his photographs,what meanings, hidden and obvious can be found in the details of his works and how much is he the observer of beauty or a part of the act. 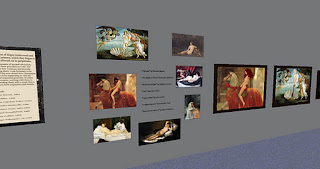 Pazzo Pestana, the third photographer has a twist to his art pieces. Pazzo takes classic well known paintings, recreates the pose so he could take photos of the essence of the beauty of Second Life women and superimpose them into the paintings. Go take a look at his "The Birth of Venus" and his interpretation of many others you will recognize.

I am waiting to see how Mistyowl’s gallery grows as more artists pieces are added.You will also see some award winning sculptures from Thane Woodford, of Raven’s Heart. You can view the works and join the subscribe-o-matic group if you wish to watch the progress with me at this location. 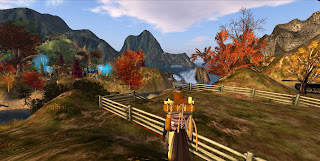 Recently I was people-watching in Caledon Oxbridge when a couple of wolf avatars I hadn't seen before crossed my path. Asking them where they got their avatars, I was pointed to a place called Timber Wilds.

Timber Wilds is a very nicely done wilderness sim that's perfect for a quick getaway from the madness and insanity of regular SL life. There's a lot to explore, a lot of little nooks and crannies to hide in and wander about, and there's what appears to be a club at one end of the sim.

The avatar itself that was being sold is a wolf (they also have foxes) by Timber Wilds Industries. It's very very well done; had a bit of a "scruffy" look to it. It's about the size of a large dog; not as big as the Werehouse Dire Wolf but not so small as to be mistaken for a puppy or a chibi version of it. The HUD comes with recoloring options for every part of the body (except for the eyes, recolorable eyes have to be purchased separately, but are very cheap) as well as several options for gestures, like sitting and wagging your tail. 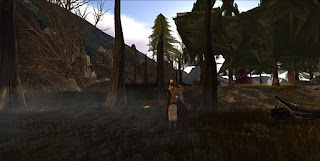 Timber Wilds (based in the sim Silent Hills, no relation to the video game) also has a sister sim, Whispering Wilds. This is an RP sim for ferals, and after wandering past the Timber Wilds vendors, saw that there was a sign advertising a trio of wolfpacks, perfect for RP opportunities. Further investigation revealed that the packs mentioned on the sign have been for the most part "inert"; from what I understand the leaders of the RPs got up and left and most of the groups followed suit. Now, Whispering Wilds is home to -some- RP, but my impression was that the RP is "here and there" --- no real main "quest line" or story line is ongoing at the moment.

Rabid Ghost, one of the admins of the sims, had this to say: "Timber Wilds is a public, feral animal roleplaying sim geared towards natural interaction between creatures in the dense forestlands that give the place its name. Also home to Timber Wilds Industries, offering high quality animated & expressive quadruped animal avatars and accessories, geared toward roleplaying and detailed character customization. Free demo avatars are available, as well as two full regions of beautiful scenery to explore with both In Character-enforced roleplay and casual OOC hangout areas." 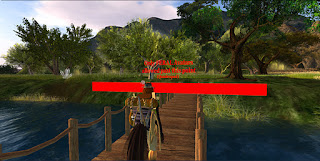 One interesting thing I saw was that in their sim rules, the Werehouse Dire animal avatars seem to be marked as forbidden in the sim. This I learned was because of a lot of "god moding" while wearing them --- more the result of bad RP by players instead of bad blood between avatar makers, and the wolf avatars of Timber Wilds -do- look a lot like the Werehouse ones.

Both sims, especially Whispering Wilds (In-Character only) are beautifully done and give a good place to relax from running about in SL buying clothes, playing dress-up, or building things in the sandboxes. I'm definitely keeping an alt in the area on occasion; it gets Four Dragon Hoards out of Five, if only because the wolf avatar is a bit more pricey than I would of liked (2000 $L).

Xymbers Slade
Posted by Bixyl Shuftan at 6:00 AM No comments:

The End of the “Second Libiations” Art Exhibit

The LEA6 sim, run by the Linden Endowment of the Arts, has been showing a new look every month. In November, it has Tyrehl Byk’s “Not a Knot” and “Catharsis” particle show. December brought a new exhibition by another artist: “Second Libiations” by Haveit Neox. 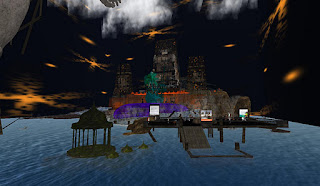 “Second Libations” had a story behind it. The exhibition depicts a future after all life on Earth ends following a disaster that evaporates all the water. The surviving intelligence lives only in virtual reality and computers: the ‘bots. And with out human maintenance, they too will eventually fade as their home goes dark. Not sure what to do, they flood their world with virtual water “in the hope of rehydrating their users.”

When the exhibit was up, visitors entered “through the doorway of a pyramid,” where they could read the story, followed by meeting up with some of the bots. Free outfits in the style of what the bots were wearing were available. Going further, they would find themselves walking down a huge statue, eventually ending up at the bottom of the sea, directions leading to a staircase that took one to land, and the “Temple of the Bots.” There, the bot scripters worked to try to preserve their virtual world without the help of their now dead users. The three rooms one could go to were an art gallery, a maze leading to a study area, and a “web tower” made up of spiders and a web symbolizing the Internet.

December 31 was the last day of the exhibit, but instead of simply taking it down Haveit decided to end things with a bang.


There will be a dramatic end to Second Libations on New Year's eve, Dec 31. As the year 2012 issues in, will it really be the end of the world? Come see for yourself. The show begins at 2 pm, SLT. (SL time is Pacific Standard Time). You may want to be there, and bring your camera.


A few dozen gathered to witness the end of the LEW exhibit. Some were in the exhibit’s costumes. And the end had become part of the story. Narrated by Lilia Artis, “The bots, still unable to resuscitate their human users come to the last resort: the human standards of ritual and sacrifice. Combining the rites of the Vikings, Hindus, and many other cultures as well, the bots begin their sacrifice, sailing into a prayer by way of the burning ship, the offering of their entire culture and being.” And the temple began to go ablaze. 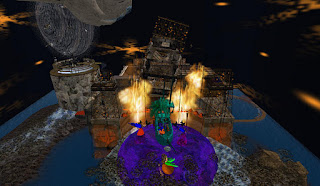 Lilia continued, “The temple’s library explodes with all the stories in its scrolls, releasing their printed letters and punctuation into a confused mass. The air blackens with the dust of ideas. No pixel seems stable. The supports of the temple begin to slide along the x axis, then the y, wrestling themselves free of structure, the walls succumb, relinquishing their will to stand. 2012 has arrived! “ And the Temple began to crumble.

The audience reacted in different ways. Some cheered at the sight, cracking jokes, “Oh, em, gee, Libations is becoming ‘Frybations!!’ “I love the smell of burning pixels.” “Are you playing the ‘Ride of the Valkyries?’ ” “We bot them all the time we could!” “Burning it down for the insurance?” “Take that, library police!” Some gave polite applause, “The Libraryinth shall forever be emblazoned in our minds' eyes!” “Nothing is ever ‘destroyed’ ... merely transformed.” Others just watched, thoughtful of the plot and what this symbolized: the end of the last bastion of intelligence on Earth.

Lilia continued to narrate as the temple fell, “The World Wide Web, spun by scripter spiders in the tower collapses in the fury of the sacrifice.” Then the huge statue fell, “The Colossus, comes to his knees as the temple of the bots lies in ruin.” Some continued to joke, while others applauded the artist, Honour McMillan saying, “Hav, you're a seriously demented talent, thank the gods for that.” 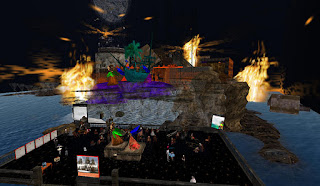 Finally, the build was in rubble, Lilia narrating, “As foretold, the year 2012 would bring an end... but, an end of one thing, is the beginning of another... From the rubble on the LEA6 sim, will soon rise the fruits of the bots’ sacrifice... One of the essences of human nature... a universal language understood not only by humans, animals, and all living things... but even by mathematics itself....”

Lilia announced that the next exhibit at LEA6 would have the theme “Music,” by the artist Artistide Despres. The exhibit’s rubble would remain until Midnight SL time, “Thank you for having joined me for this spectacle. And Happy New Year!” The audience, jokesters and all, then applauded Haveit for his exhibit and the show he put at the end, “Thank you, Haveit, for a most splendid exhibit and adventure here!” “I will miss this place, but what a great way to end it - Bravo!“ “was totally awesome, thanks! So much creativity!” “A fitting end to a spectacular installation.” Haveit expressed his thanks to the crowd, “Thank you everyone! ... I'm so grateful that you came! And thank you Lilia for helping put the text into local for me!”

More information on “Second Libations,” can be found at the UWA blog, as well as Haveit’s own blog.