Rand Lupindo (Randermander) is known as a talented avatar creator and a role play community owner within Second Life that has been around for the past ten years. I had a chance to interview him about the history of their sim as well as their next avatar release and future plans. 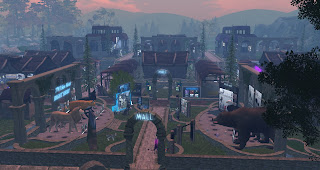 Rand: Timber Wilds started as a small, casual, wolfpack-themed roleplaying destination in 2009.  Myself and a couple friends; Rabid Ghost and Jackal Avril, had met earlier in 2009 while roleplaying as wolves on the Lion King themed "Lost Pridelands" sim.  We initially rented a small Homestead region (basically a lighter, less powerful sim that can handle fewer people, but is cheaper than a full region), and had a blast landscaping forests and mountains and caves and swamps and all manner of natural perils for Wolves to play around in.  But $100 a month for a hobby is a lot, especially as I was a student at the time. So, I thought, if I could make some kind of quadruped wolf avatar to synergize with our wolf roleplay area, it might help pay the bills and keep the sim running.  It took a few months but in August 2009 I released the first Timber Wilds Industries Wolf Avatar, and everything exploded.

It sold way better than I was expecting or hoping, but quickly got into controversy.  Another avatar company, which I won't name, thought I had "copied them" and made some pretty public accusations of theft.  I had certainly been inspired by the idea of their previous Wolf avatar, which was a quadruped body with its own Animation Overrider and a wide assortment of active poses and action animations as well as a marking customization HUD.  I was pretty naive at the time and could have made more effort to distinguish my avatar from their wolf, but what they seemed to be claiming was that I had somehow stolen their actual animation files or something, which is bogus of course. I hand animated everything, sometimes taking ideas for what kind of movement to animate from existing avatars (such as the left or right step to shift weight during an idle pose), but come on, you can't copyright "A wolf stepping left".

The accusing company published a whole youtube video lining up my avatar next to theirs to supposedly prove their case.  It wasn't very convincing, because it seemed to drive more skeptical customers to buy my avatar than the few of their loyal fans who came to make trouble.  A few vendor malls wouldn't rent space to me as a result of the connections of the accusing company, but I don't think that it significantly held back interest in TWI avatars.

I didn't do anything to fight back, hoping the situation would eventually blow over, and it seems to have done so.  The company seems to have left Second Life at some point over the intervening years. I hope that I didn't cause them to leave. I really wish we could have just coexisted. Other companies have made competing avatars to mine, some with features that could have been references to mine and attempts to "one up" my avatars, and I never flipped out about it. That's how the market works. If someone else makes a better avatar than mine, the customers get a better avatar and I get fresh ideas of how to improve.

I feel like the whole ordeal taught me that it's really shooting yourself in the foot to get overly litigious and try to dominate a market through fear rather than simply making better products. Especially in artistic fields, where the quality of products is often subjective, and there will always be a segment of the population that prefers one or another for seemingly random reasons. No competing avatar is going to knock out 100% of your sales.

Cyfir: For those not in the know, what is TWI and the sim all about? What does it offer?

Rand: Timber Wilds is a place where you can be a wolf, or a fox, lion, eagle or a bear!  And soon, a deer!  Basically for people who love the idea of being wild animals (called Ferals on Second Life and in the wider furry/animal fandom).  Become one, get accessories and skins to make yourself unique, and meet & chat with other ferals who have done the same.

The avatars are I think the central inspiration, namely the TWI Timber Wolf, Red Fox, and Lion made by me, and the BRD-MRT Eagle and Bear made by long time sim staffer Raven Seraph.  The sim is primarily the mall for these avatars and third party accessories for them, but we also have a pretty popular but laid back sandbox/hangout area, and an expansive roleplaying/exploring area.

The mall has, in addition to the main avatar vendors, about 45 third party vendors selling all sorts of skins, wearables, animations, sounds, and other accessories for TWI and BRDMRT avatars (and some others, but we try to enforce at least majority TWI/BRDMRT). 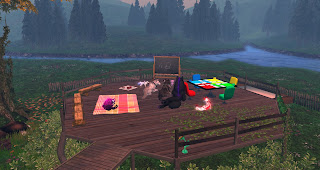 The sandbox is a kind of casual hangout, where people (of all kinds, human or animal we don't discriminate!) come to try out their new bodies or skins, or loiter while testing new stuff they are building/painting, or just shoot the breeze and chat with other guests. It has a real laid back vibe I think, usually with at least a few folks lounging about or running around and goofing off with toy guns or other items. It's a great place to come if you enjoy meeting new people, especially in a low-intensity peaceful setting, and especially people who like wild animals!

The roleplaying area is in my humble opinion one of the prettiest areas on Second Life, landscaped mostly by BRD-MRT creator Raven Seraph. It's got ice caves, glowy caves, scary caves, mountains to climb, hidden secrets to find, beautiful vistas and cozy coves. Our policy on roleplaying is to be less restrictive. We don't require any HUD or meter or anything, instead focusing on text roleplay or allowing guests to roll with whatever system they prefer. The area does have a fantasy backstory, and a free custom-built optional HUD with utility functions like dice, titler, Out of Character/Away from Keyboard indicators and some TWI avatar-compatible animations.

Cyfir: What were the challenges of starting a business and community in Second Life and what advice can you give to anyone looking to do so?

Rand: It's really easy to set up a business in Second Life, which is why I think almost everyone I've met who uses the software for very long ends up getting curious about creating content and selling it. It's a very simple process to set up a vendor in-world, and free software (Blender for modeling/animation, GIMP for texturing, Audacity for sound effects) and training/tutorials (via youtube) exist for almost all types of content creation. To become a large or successful business in SL requires a bit more time and effort, but is still very accessible to even a solo creator. You really only need a good idea, and time. My advice would be to spend some time exploring, and enjoying, the world of Second Life for a while in order to get a feel for what kinds of items are in demand or popular. Whatever cool stuff you find and enjoy using, you can learn to make yourself and maybe even make a unique improved version.

Communities are often related to products; since it costs money to maintain a region/space, it can be smart to have some kind of product line in development to help pay your sim fees. If the products synergize with your community theme (like clothes/fashion accessories for a club, or animal avatars for a wild animal roleplaying sim), it makes all the more sense as those interested in your products will probably become interested in the community and vice versa.

Cyfir: In a recent article I did on Albright, she mentioned that TWI would be releasing a feral deer avatar in the near future. Can you tell us more about that and is there an estimated release date yet?

Rand: It's true. I am making a deer avatar. I am hoping to have it done sometime in the next month or two but I can't put a hard date on it yet. I'm very slow with avatar work, I think partly because I have high expectations and I insist on continually re-doing things until they are as good as possible. I take inspiration from Blizzard Entertainment, which would usually release their games later than initially planned, but only because they always took all the time they needed to get everything perfect, never rushing unfinished work to release because they had set a deadline.

Cyfir: Are there any other projects in the works that you are able to talk about?

Rand: We have a few other avatars of different species in production, as well as some animesh experiments in the works!

Cyfir: What do you enjoy most about being part of the Second Life community and is there anything else that you would like to bring up about the sim or store? 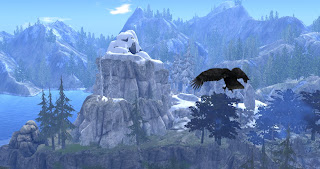 Rand: Hmm, I guess I just appreciate being able to see all the creativity coming out of Second Life, driven by the ease of content creation and monetization. A lot of the content created is questionable, and the nature of Second Life means it's sometimes hard to keep trolls and problematic content away, but I think the freedom in SL allows a lot more amazing and awesome things that wouldn't otherwise see the light of day. Every day I log in to Timber Wilds I see stunning new textures, wacky third party animations, and scripted toys and doodads that pique my curiosity.  We've even had an in-world theatre company perform plays at our sim using SL avatars (some TWI and BRD-MRT ones!) as the actors, which was a really unique experience. I'm just eager to see what the SL community comes up with tomorrow, and the next day, and every day after that.

You can check out the TWI store here: https://marketplace.secondlife.com/stores/32831 and their sim here:

Cyfir
Posted by Bixyl Shuftan at 6:00 AM