New Crux Avatars On The Way

Sovereign Wolf, owner of Cerberus, is an accomplished mesh and avatar creator who is working on bringing the original Crux avatar to a more modern shine. I recently had a chance to interview her and ask questions regarding this and more.

Cyfir: What got you started in 3D work and avatar making? 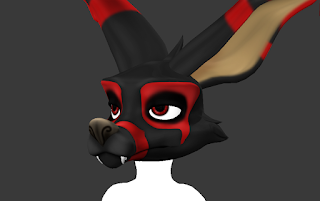 Sovereign Wolf: Maybe it's kind of anti-climatic to hear, but I was tired of relying on other people for mod parts! I realized I had a knack for it. I've always wanted to do avatar design and creation, even back when all there was were prims. I've been meshing for mainstream human stores for the past 7+ years, and now I've decided it's time to take those skills and try to get into full time avatar creation!

C: What have been your inspirations when it comes to your work?

SW: I used to be a huge Sonic nerd and I'm a huge Disney nerd too. Anything animated, 3d or traditional. Huge nerd for it and now here we are! Some of my in-world influences are Curious, KZK, and Mutation Industries. Just to name a few!

C: What got you interested in redoing the crux in modern mesh and bento?

SW: I loved my MI fox and MI crux, (I still have my original crux somewhere in the depths of my inventory, ha). I just felt like the following the crux had would appreciate a modernization, as I felt I would, too! I would have never stopped wearing mine if it had been updated to bento. The crux has influenced so many people. This is much more of a passion project for me. It's very nostalgic!

C: What have been the challenges of recreating the crux to "modern" standards?

SW: Definitely the facial structure; the brows and lids mainly. A lot of stylization of the original crux was sort of due to the limitations of sculpts at the time. And so trying to find a middle ground that doesn't change the look too much has been a bit of a task!

C: What does the original creator of the crux think?

SW: She told me, quote, "I think that if the folks who liked the sculpted version just want a mesh update without heavy design modifications that would be pretty ideal!"

C: Can you tell us what features will be included in the new crux? 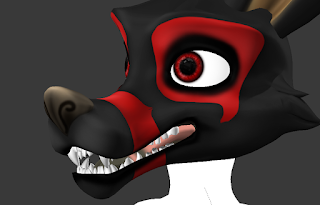 SW: So far, I'm trying to make a full facial expression AO. The tongue should have multiple states, maybe some animated ones. The ears will have an AO setting, as well as poses. There will be two selections for styles of teeth. I'm going to be including a full mesh body, and standalone versions of the parts and head (as fitments allow). I will probably offer multiple sizes of the limbs; toony proportions and maybe less exaggerated. I'm testing out various configurations for bento animating the tail, but will probably include static versions just in case! I'll be trying to stay as close to the original textures as possible, but offer multiple choices for things like teeth ( Clean or dirty ). Hopefully the final features will be too long to list!

C: Some original crux modders rely on sales from different color mods. Will there be a color palette chooser baked in to the avatar?

SW: I will only be covering the colors originally released. I will include shading PSDs with the avatar, as well as UV maps and everything else anyone will need to work on the av and modify it! There will also be an applier system! I will be splitting the original colorations into 3 packs of 6 (There's 18 original crux).

C: Is there a general release date window yet?

SW: Afraid not. This is in the pretty early stages. Avatar development usually takes me anywhere from 3-4 months (and I'm about 2-3 weeks in). I might decide to give it more time to add all the details and options I want to add in.

C: Is there anything else you would like to add about the new crux or your store in general?

SW: Yes. Please, all you die-hard crux fans out there, keep in mind that this remake will in no way stop you from enjoying the original. I know I'm not Malluch, but, I assure you that I too am a fan and I will do everything that I can to pay homage to this influential avatar! I am going to handle it with as much care as I can possibly give!

It seems that the new Crux avatar is in good hands. Those who have wanted to see a new version of the Crux will have to wait a bit longer, but it should be well worth the wait!

Cyfir
Posted by Bixyl Shuftan at 6:00 AM