Oz And April Linden Summary, Last Names And Other Questions

On Tuesday June 25 at 2PM SL time, the "Meet the Lindens" event with Oz and April Linden took place. Saffia Widdershins gave the interview, with Patch Linden taking questions from the audience. As Oz is the Senior Director of Second Life Engineering and April the Systems Engineering Manager, this was the event of the week in which people would get the most answers about upcoming features and technical questions about Second Life. This included when will residents get the option to get a new account surname, which Linden Lab stated in March 21 last year they were working on.

To begin with April had been a resident of Second Life since 2006 before being hired by Linden Lab. She still has her regular account and has a couple regions under it. She commented she feels more of a resident than a Linden, saying at the end of the work day and after dinner, she goes to her computer and signs onto that account. She described her coming across Second Life as especially important as she came from a family where certain issues "were not to be discussed." The virtual world allowed her to learn more about herself and others, "I love working here, this platform is so important to me."

Oz in contrast had signed up years ago, but he was on an old machine at the time and didn't do much. While April had the benefit of her residency experience, Oz compared his learning experience to drinking water from a fire hose. Although he found his first days overwhelming, he liked working at the Lab as it was a fun place to work with great people, with fascinating "lore" about the early days. While April is at an office, Oz works from home.

What Oz liked most about Second Life were the stories about how the virtual world can help people in their real lives, "We get a steady stream of those. ... you don't get those working on web browsers or telephones." April stated it was the same with her, "If I'm having a really bad day, I'll hang out with some folks here to remind me what I'm doing here" 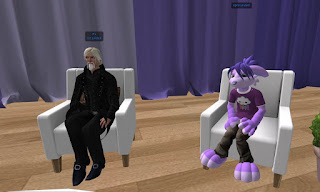 The challenges though were many. Oz commented the biggest one is usually how to update something or introduce something new without breaking something else. The "backwards compatibility" of making sure older things don't get broken is a neverending issue, "we often don't know about it until it breaks" April called the grid complex and diverse, built by many generations of Lidens over 16 years, additions made on top of another. And occasionally the way to fix things is when the Grid is offline. April stated it gave her no pleasure at all to do that as when she was a regular resident she hated it as much as everyone else.

"The hard part, and I may have contributed to making it the hard part, because I underestimated how difficult it would be. The hard part is allowing you to change your name. What we didn't want to do is say 'We're going to reintroduce last names, but you can't ever change your last name, which means all of you who got "stuck" with the last name "Resident" are just out of luck and you have to create new accounts.' That didn't seem fair. So we said we shouldn't just reintroduce last names. We should give people the ability to change their name. And that turns out to be the tricky part. It turns out that every part of Second Life, absolutely everything, was built with the assumption that your name can never change. And that means lots of things treated as something that can be cashed and the cash never needs to be cleaned up or updated and it has to be ... we have to go back and find that assumption everywhere in Second Life. And that's a *lot* of code.

"So we're working on it. We're knocking it down one system at a time. You would have thought it was based on a key, it isn't always, and the trick is that despite the fact that it was maybe not the best way to do it, to be saving names in diferent places, it always worked because names could never change. So it's the changing part that's ... We are working our way through that process. We're getting there. We're making progress. We'll get it done eventually. Anyone who's been to one of my regular user group meetings knows that I don't talk about making predictions of when things will come out until it's so close, I just can't be wrong."

April commented, "As Oz and I sometimes joked, turned out this was a really hard problem. And we didn't quite realize how hard it was until we started actually trying to do it." Oz added, "We're working on it. We are making progress. It'll be out, eventually."

Saffia asked if one possible problem was someone who changed their name possibly loosing their inventory. April answered , "That's the kind of stuff we're trying to not have happen."

When the audience had their chance to ask questions, many were about last names. One was how did the Lab plan to make name changes? The current plan was that residents could pick from a list. The number of names on the list wasn't decided on yet. But like before the list would change time to time. There were no plans on making old surnames available again. There was discussion within the Lab of possibly accepting suggestions for last names.

There will be a webpage to go to for those interested in changing their names. For the first time, it was revealed that having one's first name changed is also part of the plan. But the combination of the first name and new last name will still have to be unique, "not used by anyone, ever." 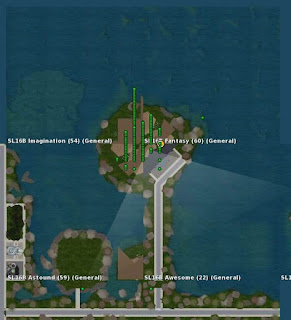 It was asked if new residents will have the option of choosing a last name. Oz Linden answered there were no plans to do so. He reminded the crowd that when the Lab looked into the issue in 2010, they found people signing up saw it as an "unfamiliar thing." In fact, their rate of successful registrations went up when they took last names away. "You'd be surprised at how difficult, how many places there are in the user experience to give up<" Oz spoke,  "And it turned out that was one. People were bothered at having to pick a last name. So we'll give them the default name, which will probably remain 'Resident.' We don't want to scare people off by making them pick a second name."

It was asked why was the Lab planning to charge residents to change their names. Oz answered, ""It has a social cost within the world, and a complexity. Not something you want people to do too frequently. It creates trouble. One of the ways to slow down things we don't want to go too fast is charging people for it." As of now, there were no plans to have any other limits. Oz stated though if too many residents changed names too often, they could impose time limits such as no more than once a week.

It was asked if residents would be notified when someone on their friends list changed their name? Oz answered, "We haven't addressed that.That's an interesting question. I can see ... that might be a good idea. We haven't discussed it." The person would still be on the friends list. Someone asked would the name on whatever items the person made be changed? Oz answered that was the goal. But as names would be in caches, the updating might not be instant, but could take some time. He hoped that it would be a short transition period.

On how much would changing names cost, Oz stated they were no longer making guesses on how much the fee to do so would be until after they figured out the process on how to do so.

Another issue was Linden Lab moving Second Life's data to "The Cloud." Oz answered they were making progress on that. They hadn't been notifying residents about updates concerning it partly because there were so many components of data, April stated about 200. But another reason was people were blaming cloud updates for perceived bugs, "We will avoid telling you when we've moved something. ... We get lots of bug reports that blame that ... muddies the waters." It was April's team that was largely responsible for moving data to Cloud servers. Among the things in which the moving was done were most of the resident inventories, "We didn't tell you, and we didn't get the bug reports," Oz remarked, "Some months after we've done something, we might mention it." They hoped a result of inventories being moved to The Cloud would be to make them more stable.

There were other questions. Someone asked if there would ever be more than ten pics in a profile. Oz stated that was a likely perk to offer those on Premium accounts in the future. It was asked with so many events and places having multiple groups, the Second Life Birthday being one example, would there ever be a "sub-group" category? Oz answered, "We haven't talked about it," admitting groups ended up being used for a lot of purposes. He stated what the Lab has done mostly is work on reliability.

It was also asked if Linden Lab would work on a "web viewer" in the future. Oz answered, "Absolutely," but couldn't offer a prediction as to when it could be available. "We know enough about it that it's possible, works pretty well. ... There have been three or four experiments that other companies have done." He stated the Lab worked on one for a while, "What we haven't solved is how to make it affordable. We expect that in time." April called making one "not a small task, but we've done it before."

There was also a mobile viewer in development. Oz stated there would be an alpha version available soon. But the first version would be limited to logging in and chat. It was commented it sounded like Radegast in how it worked. Oz called it a way to get in touch with SL without the graphical interface.

It was asked how come Second Life puts a low value on texture memory. Oz answered the main reason it's stayed so low, many users have older computers, and if it was allowed to be set too high, some of them would crash before they were even logged in. So old software "lies" about how much memory is available, "Don't run (SL) on Windows 98, really." He did say they were committed to making the number larger for users with more high-end computers.

One thing Oz brought up a few times was that Linden Lab has been trying to hire a senior graphics director, "please send them our way." The hiring of one he stated would speed up a few certain projects.

There would be a few other questions from the audience. They and the answers can be seen in the video of the event.

Posted by Bixyl Shuftan at 4:30 PM