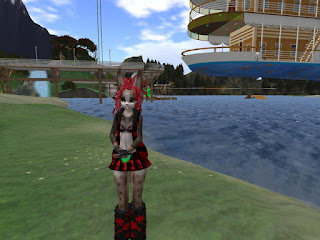 I recently met up with Silvia Ametza, the builder of the Newser's exhibit at the Second Life Birthday. She invited me to her sim, and we met at the meeting place there. Silvia then started showing me her work. Starting with a copy of the Newser tower.


“This is (the) tower – original as intended. All works – all floors available.” said Silvia, “But due to script restrictions, floors between ground and top were closed.” We got on the elevator,. “All is automatic, like a real elevator. We planned with Bixyl to put on every level something from SL history – 15 levels – 15 years. Unfortunately, our plan was halted by script restrictions.” 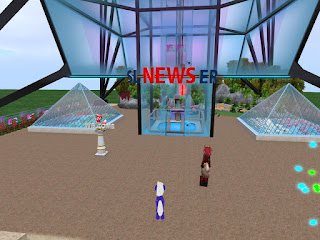 My next question was, “What were your first few days on Second Life like before you become good at building.” According to Silvia , it was confusing, “I logged in and spent maybe 30 minutes in and then – logged out for a looong time.” She still had an account and after some time, just logged in without any goal – just logged in and started to explore. “Exploring was actually my first activity in Second Life,” said Silvia,

I asked Silvia Ametza where she got her first start in building. According to her, some years ago, not that long as at the beginning, Silvia didn't enter Second Life much. “I find SL fascinating with all that options available to residents – socializing, finding new friends regardless of where they are from, builds, clubs, various activities, etc and I decided I will learn how to shape prim. (smile),” replied Silvia, “You know – brick – one simple brick and you can build cathedrals with them. I do see in simple prim – simplest shape – cube as a brick. I can shape it. I can use many of them and give them some meaning. Later I learned some scripts and now, meshes.”

“I do still prefer using simple prims shaped and made from the mesh," Silvia Ametza continued to say, "It is very rewarding to see your build appreciated by people. This tower was built by two of us, Aimeelou Destiny and me. Aimee gave life to this tower, and to many builds we did together, with her elegant highly efficient scripts and as well builds. She corrected me many times what and how something should look. I do love building, showing it, and often give to people – I am very poor as (a) seller. I do prefer build for my friends and as a gift. Their happiness satisfies me a lot and it is a good pay for me.”


The next question is if Silva took school in learning how to build. “No,” she replied, “My first prim rezzed – cube – and I played with one single prim to see what can be done. Then I rezzed other default shapes like cylinders, etc and straight away, my imagination busted out – woooooow this is material I could build probably anything. So, no school, self teaching (smile)." 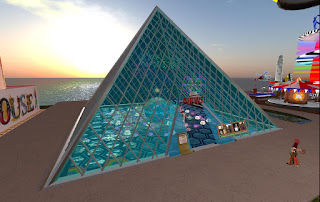 Silvia wanted to show me her biggest build. “It was difficult and it was done for joined sims called Cumberland City – they used this build but sadly, sims are gone now.” Before Silvia Ametza showed me her biggest build, I asked her how many times she had built for the SL Newser on the Second Life anniversary date. “Three times,” replied Silvia, “I did enjoy all of them.”

I was curious about if Silvia had any inspiration when it comes to building something. “It is various," replied Silvia, "Depends on mode or for an example, my best friend, Aimee shows me something – some pictures on Google and just says 'we can buld that.' And – we jump to work and just build, rebulid, fix. Often when I am exploring Second Life (many nice sims and builds) I get motivation there – plants, builds, vehicles, a lot of motivations and trying to check my abilities what I can do. As well – friends often ask- We would like to have this or that – is it possible for you to build something? Or in case of my friend< Gee – I see her build – gallery and have idea how to rebuild and make it better."

I asked Silva if she would continue to build for a long time. “Yes, I like building and will continue,” she replied. We then went to an exhibit by Kim. “Kim was able to accumulate to small parcel a lot of information," Silvia told me, "She even created voting stations to see what people think. In my opinion as builder, this is one of the best exhibits I have ever seen. Weather prediction and giving information on demand fast in case of some emergencies like was for example Catrina Storm in the USA requires a lot of education and deep knowledge. It is her world. Kim is now on stage in China, having the meeting with Chinese scientists, she inspires me a lot as well, she is motivating me to build something special, not just to please eyes.” 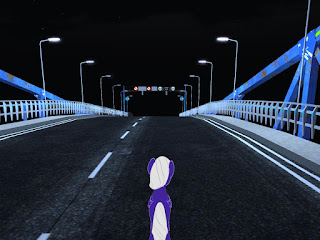 Silva went on to show me her biggest build. “Increase draw distance to – maybe 400 to see it all," she told me, "This bridge with realistic design. It has lights as well and all bridge needs.” She showed me the other side of the bridge. We went on maintenance carriage. “It goes back automatically – Aimee and me – we made this bridge together. What's more, Aimee scripted it all (smile).” Silvia then offered to show me their airship. I accepted, and she brought me to it, telling me, “Fully functional air ship with moving parts. Airship made by Aimeelou Destiny and me. Scripted by Aimee.” Unfortunately I found out a bit too late that I have forgotten to take a picture of the airship but it was amazing.

In my opinion, Silvia Ametza is a really good builder. She had built a 15-floors building for the SL Newser for the SL15B. I have gone on the building and would end up being impressed. I look forward to seeing her new buildings in the years to come.