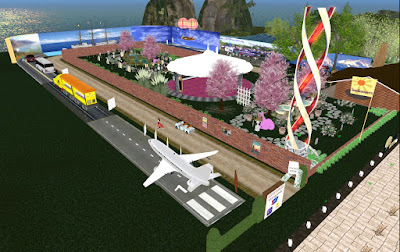 The Relay Weekend is the high point of the Relay for Life fundraiser season. A large number of sims are opened for the month and with the permanent American Cancer Society sim are made into a circular track, with a few sims to the side for activities such as boating, racing, DJ events, and more. The track sims are noted for their builds. Some are special "designer sims." But most are divided up into campsites for the various Relay teams. 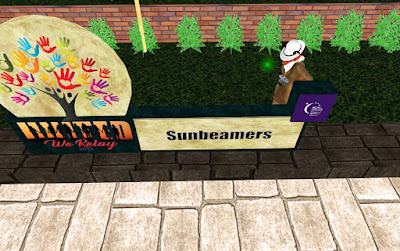 Among them in North America Hope is that of the Sunbeamer team. Since their first year in 2013, the team has made a number of builds, in 2014, 2015, 2016 which won an award, and 2017. Now, once again they have a build that represents the fight against cancer and honoring those lost. 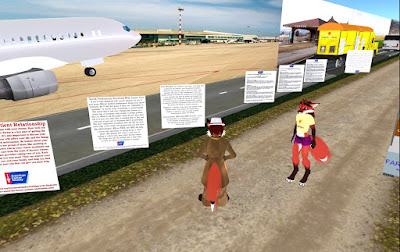 I had a few words with Cynthia Farshore, whom with Shockwave Yareach did the majority of work on the campsite, "Shocky helped with the furniture and the coffee house. Rita and Snowy the memorial garden and trees and plants." When I came over, the place was mostly done, but there was still a little to do, "I feel there are more info panels needed on a couple sections but otherwise (it's done)." 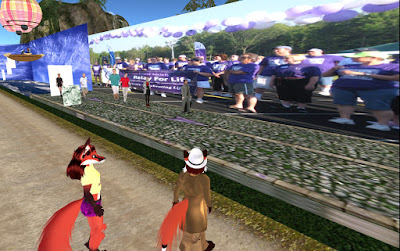 Talking about the campsite, Cynthia told me, "When time came that I was going to be the builder I had no idea what to build. How the design came about was in pieces. I just developed it with knowing that I needed to connect the different aspects of cancer fight to one point, the point I chose to be the Relay. So I went to the ACS website and looked at the different areas and came up with the doctors and nurses, transportation provided, the hospital and treatment centers, research and all came to the Relay. At this point I choose to set them in sections around a walkway and each section a mode of transportation assigned that represents the different areas of cancer fight traveling to the same goal to be united in the fight." 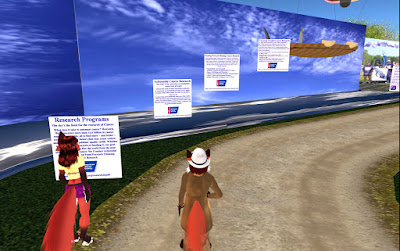 The entrance led to a path that led beside a brick wall, with information about cancer beside the path. "With this one you start on the ground and go up as it says the sky's the limit." 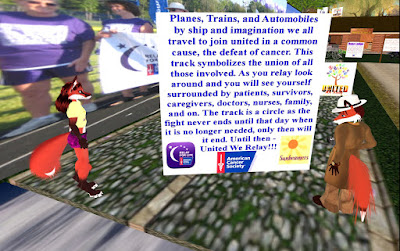 "My own thought." Cynthia spoke of this particular display panel. 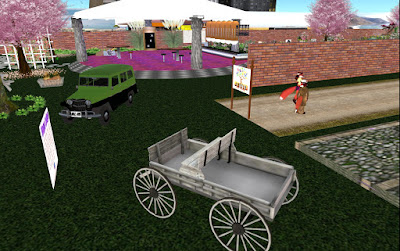 The end of the path led to a wagon and car, next to a coffeehouse area. 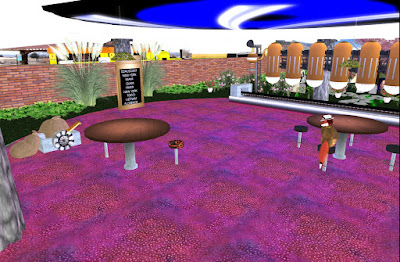 "As we come to be united in relay there the common area is the place all merge in a union of fellowship. Coffee houses are today's general meeting places, much as the taverns were of old." 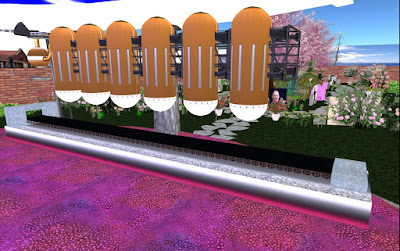 The coffeehouse had a copy of the steampunk coffee brewer at Club Cutlass. 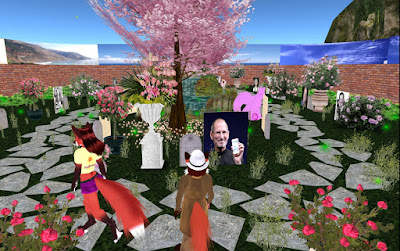 Behind the coffeehouse was a memorial garden, with numerous pictures of personalities whom met their end due to the disease, "Along with this we can reflect on the ones we lost in the battle against cancer." 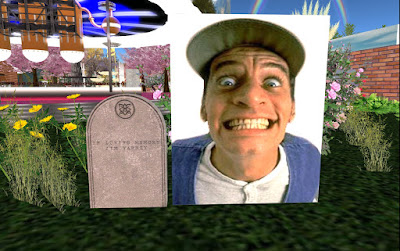 "and sometimes you're surprised." 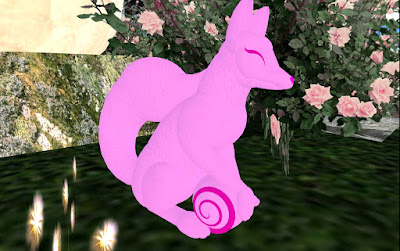 Sunweaver campsites have always had a pink fox statue in honor of Artistic Fimicloud, a member of the Sumweaver community and Passionate Redheads team, the precursors of the Sunbeamers, who passed away ten years ago. Clicking on the statue gets you a notecard explaining who she was.

Fimi was a good friend and renter on one of my sims for many years.  She lived in her treehouse and had it decorated with artwork, she created.  Fimi was a talented artist and had a gallery here on SL, where she sold her artwork. She also sold her art in RL, and her favorite subject was her beloved Hudson Valley. Each painting also included a hidden pink ribbon, as a reminder of her fight.

Fimi was fun to be around and always up for a good laugh or joke. She was friend to many.

She was a Breast Cancer Survivor, but it came back and the second bout had spread, and was the one that finally took her life. She is sorely missed. Before Fimi passed, over 70 of her SL friends posed for a photo and we sent it to her, so show our LOVE and that she was in our PRAYERS. It is her courage and never give up spirit that drives our team today.

WE RELAY FOR FIMI!  The Pink Fox is her avatar. 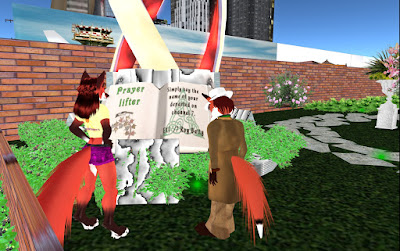 The past few campsites have had a prayer tower. Originally created by Becky "Sha" Shamen, this year had a different one by Shockwave, "Shocky changed the design a bit for this year. It spirals." 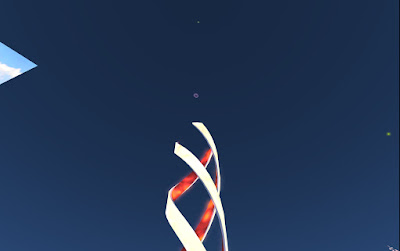 As in Becky's tower, people can name someone they wish to honor. Then the name floats upward towards Heaven. 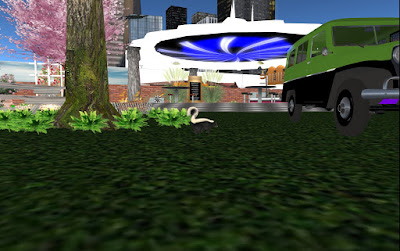 Trotting about not far from the coffeehouse near the car was a skunk, "don't get sprayed." 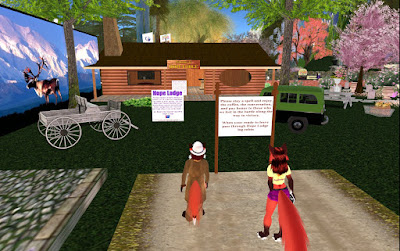 At the end of the tour was the Hope Lodge, "Hope Lodge and lodging program info in here." 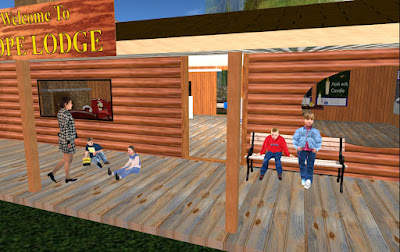 The "dummies" were from both Cynthia and Rita, "Even while I was at work this week, I was shopping Marketplace during lunch for the dummy avs. Rita will put out some of hers and that should be enough." 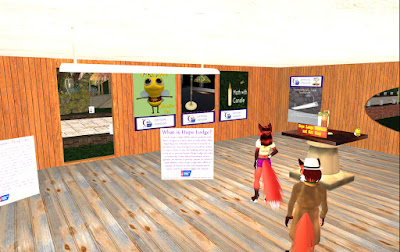 There were more information boards inside, as well as a few vendors for products. Someone had already bought one of the lights, "People are checking out the place already ... well, that's good." 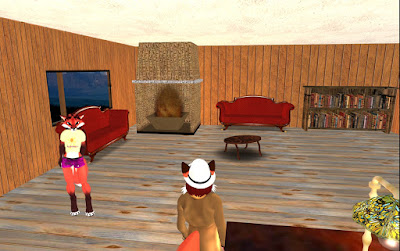 There were also a couple seats next to a fireplace one could sit and chat, or just sit. I noticed the fireplace had Ancient Egyptian hieroglyphs on it. Cynthia told me that was Shockwave's doing, "Looks rather old too. Shocky's so can be." 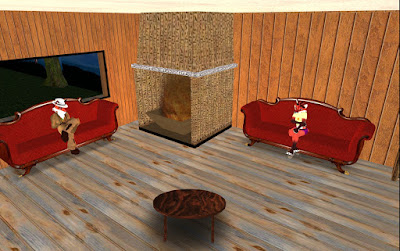 Cynthia would say, "This one was tough cause I had to make a cross-country trip right in the middle of the build time. I worked a few hours a night in motel rooms, using a laptop. I'm used to doing big camp builds on two monitors and a strong computer. (pause) Actually, two computers and four monitors, setup from DJing days. And the final night in a motel the laptop died, must of took a hit somewhere ..."

"I'm happy with how it's worked out. Oh, when I started I was nervous. But I am a bit of an artist, and have stood looking at a blank canvas a couple of times. I don't know it just comes to me. ..." 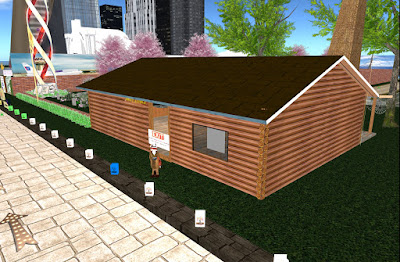