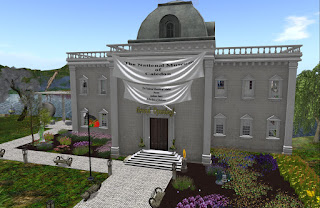 On Sunday July 22, there was an opening party for a new exhibit at the National Museum of Caledon in the Caledon II sim : "Reflections of Darkness." As it turned out, while this was  Andrea Jones' exhibit, the artwork wasn't hers but rather the poetic verses tied to these dark (mostly) images of various artists. There was a notecard one could pick up at the entrance, as well as a sign on the wall, that explained how the exhibit came to be.

Welcome, Back in the early part of 2013 I was a heavy Facebook user and I was going through a rough time. I ended up spending several months where, as I came across different pictures posted on FB.  I saw stories in the pictures and crafted verses to go with them.

Some of the verses were a form of therapy and as such some are very dark. Some were written for friends on Fb and some as parts to their Wiccan pages. The verses are raw, placed here as they were originally posted so many years ago, good, bad, short or long. Many of the images here have the artists name on them. So credit is placed to them, the words are mine.

Due to the amount of material, It could take some time to go through so take your time. Enjoy. 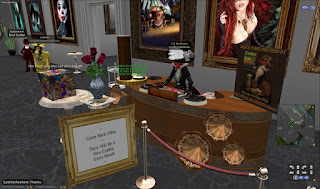 Cynthia Farshore played the music for the event, which got some complements, "Thanks, trying to put in something for everyone." There were a couple songs from "The Phantom of the Opera," "Thriller," "Ghost Riders in the Sky," the theme music to "Ghostbusters," Ray Stevens' "Sittin Up With The Dead,""Monster Mash," and more.

People also complemented Amdrea for her verses, "... you did write some really good poetry to the pictures, Andrea." "It is true, Andrea, it is only having journeyed through loss and darkness that one truly appreciates the light." Talking to Andrea, she had a few things to say about the exhibit, "There are a few lighter pieces in the mix. The Facebook page was made for darkness though. A few friends are keeping it running. I only wrote for a few months." 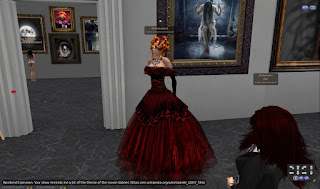 Star (Astarynite Resident) is the owner of the museum. When I asked when the idea came about for the exhibit, she told me, "I think Andrea had three weeks to pull everything together." Andrea explained, "I stated importing the verses and pics from Facebook a couple of years ago. I built a museum to put them in, but did not finish pulling them all from outside Second Life. I spent  about three weeks, yes, finishing the material. Star's museum was already to go, so I did them for here. I have more material, but no pics to go with them. Wasn't really needed on the Facebook page" 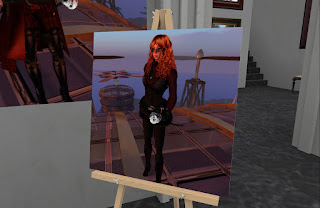 When Cynthia started playing the theme music of "Dr. Who," that got Andrea thinking, "Hmmm, I had a piece about Dr. Who,. but I don't think I presented it. ... Ah, here it is. 'A Whovians Bad Night.'"

So I am a Whovian and sleep won't come
These rhymes these rhymes bounce off my ear drums.

Here in the nexus the question is not asked
So silence can not fall like an axe.

Fixed time points must stay safe
So everything in time stays in place.

So asleep and dreaming must I be
Because Captain Jack just made a pass at me.

Hello Mr Spider why are you there?
What are you doing on the wall over there?
Why are you hanging over fathers head?
He won't like it if he wakes and finds you there.

Mr. Spider why are you so large?
Do spiders grow that large in the yard?
Should father wake up he will try to take charge.
He will try to squish you for being so large.

Mother would probably let out a scream.
Awaking my brother who is pretty mean.
Mother would grab me and run until she ran out of steam.
Leaving father here to squish you to cream.

I think Mr. Spider you should come with me.
I was about to sit down with my dollies and have tea.
You can join us, as I have a cup already laid out for tea.
With as many arms you have, you can have as much as you need.

I think it would be best if we let them sleep.
Waking them now would cause a scene.
If you are hungry I have cookies with my tea with icing.
I think you will like them better than people sleeping. 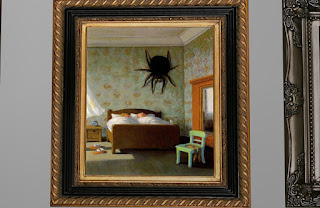 One visitor commented, "I'm going to sleep with the lights on after seeing this spider over the bed picture." Andrea responded, "I have a spider human avatar, but it cleared the room last time I showed up in it. The DJ was frightened of spiders, she poofed. I left so she could come back." Cynthia commented, "While in the Nav,y a guy told me he was on the ship in his rack which are enclosed but for one side, he opened his eyes to see a spider about an inch and a half wide hanging right above his head which would have been only 8~12 inches." She soon played Jim Stafford's "Spiders and Snakes."

Another visitor commented, "The Great Beyond verse is my favorite so far!" This was a picture of a skeleton in an astronaut's suit. Andrea commented, "I was thinking of the early (Star Trek) Federation space flights when I wrote it, with a little 'Space Above and Beyond.'" 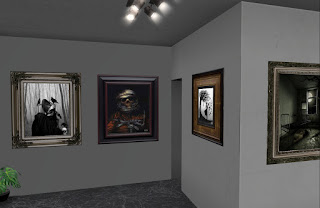 No more eyes, no more ears
Nothing left with for you to know fear

One picture looked like a big contrast with the others, a picture of puppies. What are puppies doing in a gallery full of ghoulish pictures? But a closer looked showed something wasn't quite right, especially with the title: "Demon Dogs."

We look so cute. But that is a disguise.
To see our true nature just look into our eyes

Come closer and we will show you why 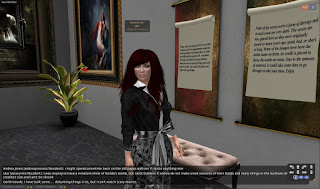 Star has only had a few exhibits in the museum before this one, "Andrea's is my fifth show. I was hoping to have a miniature show of builders builds, but most builders it seems do not make small versions of their builds and many things in the build are already at their smallest size and can't be shrunk."

So what is Andrea planning next? She told me, "I'm working on a community build in the Steam Skye City region. The Island of the Circle. ... I'm trying to come up with a build for Burn 2 in October ... for the Caledon Oxbridge University October fundraiser." She would be doing a Halloween-themed build, "I'm going to build one big one like last year ... with maybe two dance areas."

As for Star's museum after Andrea's exhibit, "I will be looking for a show in September if anyone has photographs, writings, anything they would like to display for a month or so."