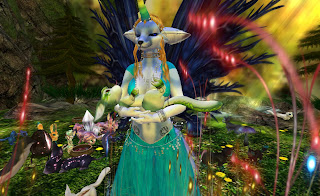 Meeroos are among the most popular of breedable animals in SL. The Mainstore sells many starter packs, which while convenient offer the least sought after types for a price much higher than they would ever sell for as individual nests.  While it gives you a home and food for so many weeks, I do not recommend this package unless you happen to have a lot more lindens than you do time.  All meeroos start out in nests, which you coax, please make sure the land is set to the same group or it may not find a home.  These homes cost about 250L, and can house up to 8 meeroos.  Meeroos of different kinds coats and sizes will all share the same home.  Homes come in many shapes and designs, just make sure it is a home designed as an official home and not something purely aesthetic. 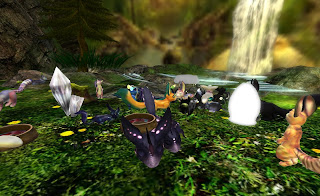 Meeroos mature in about 7 real-life days, at which point they are able to mate.  To mate their personalities must be compatible for example aggressive will not mate with friendly but will made with shy. They have seasons which differ depending on basic type and region they come from.  all meeroos can interbreed. Meeroos will stop breeding at 60 days of age, but still require food.
You can lengthen the season of a meeroo by purchasing a "battery" at the mainstore or elsewhere.

Meeroos eat four times a day and there are five types of meeroo foods, desert grass which feeds those from arid regions, berries which feed those from temperate areas, and jungle vines which feed those who come from more tropical locales. Florofruit feeds all nocturnal meeroos.  Ambroosia feeds all types of meeroos besides meepets.  Ambroosia costs a little more than the other food types because it is easier.  All food is cheaper in bulk amounts.

Meeroos will run away if they do not have food for 3 real-life days.  A meeroo who runs away or is lost some other way other than being released can be whistled back by a Customer Service Representative for a cost of about 350.  There are also toys, decorations and costumes you can purchase for your meeroos, but they are not required. Meeroos can be made into non-eating, non-breeding meepets that do not run away for a cost of 1000 lindens each.  They will then eat free honey from the mainstore. It is a little cheaper if you buy the honey-dipper in bulk. 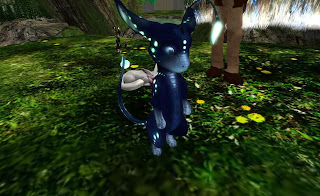 Meeroos come with several distinct traits. Some of the most sought after include rabbit-like or "flitter" ears and vulpine like or fox characteristics.  They come in sizes that include teacup, toy, small, average, large and giant, the sizes tend to be more individul preference than anything.   The ears can be soft, button, notched, long down, short down, flitter, upright, or normal, or fringed only in the case of nocturnals. tails can be feline, curl, long, vulpine, normal,  or in the cases of noctural lantern or brush, which is the standard for nocturnals.  Only nocturnals have bioluminescence which can be shimmer, dew or sparkling.  Nocts have a lure, unlike diuranl roos, the lure can be ancient, classic, sweptback or the much sought after "scarab" which is a double lure which looks like a pair of antennae.  Coats can be striped as in bengal, or masked, solid etc.  Nocts usually have a sort of spotted tribal pattern to their coats.

There are limited meeroo such as dryad ,which do not pass on their traits but which have a very very slim chance of being produced by almost any breeding pair.   Clover were a beta-testing gift and also do not pass on traits.   In the next version release they are going to have wings and horns as possible traits, which is much eagerly awaited.