Celebration at the Arcadia Asylum 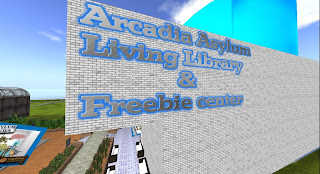 It was with great pleasure that I attended a party that celebrated this first anniversary of the Arcadia Asylum Living Library and Freebie Center in Makazi. You may recall that the original library disappeared back in June 2012 and all the network vendors went down. It was a great loss to all fans of Arcadia. Horror spread across the grid because of the sudden closing. Interested people began to collect and form a new library in the same month (Aug 2012 article). 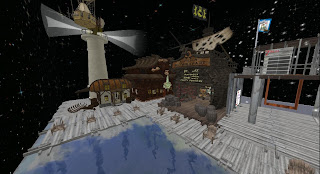 The Anilis Freebie Center Becomes the New Arcadia Asylum Living Library.  Thanks To generous Sponsor Ship by Mingmanx.  A new group, The Arcadia Asylum Libraries & Exhibits group was formed to aid in collecting all the lost items.   Conrad Evaneir donated his freebie vendors to the library group. Professor Grey added the Mieville Branch Library, thanks to the owner of the region, Perryn Peterson, in August. The Anilis branch was moved to Makazi in November. It was decided to spread the vendors around so they would never be lost again and there are now almost a dozen affiliate libraries around the grid. 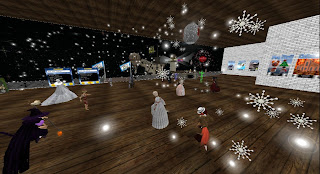 The party was a celebration of the efforts of the group over the past year as they continue to add to the collection as items are recovered and as Aley, as Arcadia is known today, makes new ones they are added to the collection. It was a pleasure to see most of the collection on a plot at SL10B in June. There were many colorful avatars and costumes at the party as there was a contest for the best male and female costumes. Gunner von Phoenix (masterperry) provided the music. 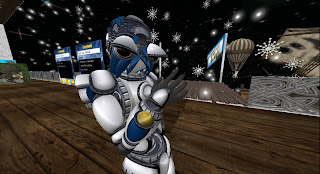 Prof. Grey (BrienL61 Landar), the curator at Mieville, commented  “And, what can I say, all of this is thanks to ALL of you -- the donations you make, the time you spend talking about the great freebies or Arcadia Asylum, the time you take to share what you have gotten ... and most of all, thanks to you Aley for your creative generosity. With out your support and the donations you toss our way these doors wouldn't be open.So now that we have done the work, it is time to celebrate our successes.”
Pay a visit to the library and see what treasures you can get all for free thanks to Alley and the group that is preserving them. Make sure to drop over to check out all the treasures.
http://maps.secondlife.com/secondlife/Makazi/202/106/24
Gemma Cleanslate
Posted by Bixyl Shuftan at 6:00 AM