One of the many things that people use second life as a tool for is to show off art. One day Mellowdee or her resident name melody1778 teleported me to an art show at Velequez (234, 76, 23). Mellowdee is a nice lady so I said sure. 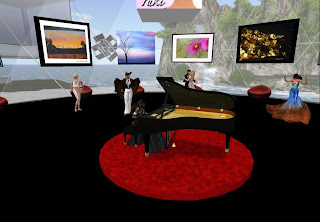 With support from Timo Dumpling and Samantha Chester, Mellowdee created art outside the small clear dome. In the center of the dome Yukithepianoplayer Hutchinson played piano music to add positive energy to the event.

Inside the dome though were many pictures of various mediums of art. A lot of the pictures were pretty and professionally done it was hard to pick a favorite. Various artists drew the pictures in the dome. Mellowdee did the scripted artwork in the gallery found easily by walking through a sliding glass door.

Watching the scripted artwork was fun as it constantly changed shape like an ocean wave or a lava lamp. By hitting refresh on my snapshot option in firestorm phoenix I saw many variations of the same artwork as the color lines flowed this and that way on the black background. 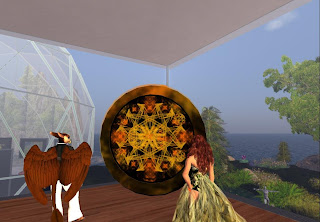 Mellow came to her own art gallery after Yuki’s live piano show. She showed me the mandala which place in a space art show by popular vote and 3rd place by jury vote. With only ten prims to work with that must have been a major challenge.

Samantha Chester came up to meet with me and Mellow soon after. She mentioned a Virtual Harlem that is no longer in Second life. She mentioned that LL took away an educator discount on sims. I said that’s too bad an art gallery could be shown to kids and adults online as a school fieldtrip. 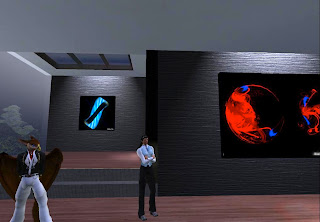 Timo Dumpling came to talk to me when the other guests had left and he complimented me on my new avatar, "Incredible avi that a bit of everything (laughter)."

Grease Coakes, "My avatar? Thank you it was rather expensive."

Timo Dumpling, "Had the gallery just on four years now and it is just starting to work."

Timo’s gallery used to be at info island which was a place for newbies to get their bearings in second life. Sadly he said it no longer exists. He now found this new sim which is less restrictive.

Art inspires us whether in second life or if you visit a museum in real life. With all the bad things that are going on in real life it’s a nice escape to look at eye candy around yourself or at an art show. Something to keep in mind when you log into Second Life it’s one of the many things that the grid has to offer. Mellow dee and her art show will be up until July 31st.