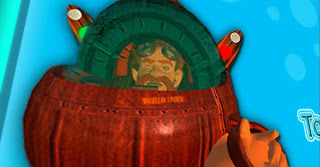 Magellan Linden, a traveler in Second Life who used to blog about his findings on the SL continents a long time ago has surfaced as the guide of a new inworld game called Magellan’s Grid. I would say it is a spin off the the Linden Realms ( http://slnewserplaces.blogspot.com/2012/02/game-on-at-linden-realms.html ) . Magellan is trying to help Tyra, custodian of the crystals in the realm. Evidently there are mole people (not Linden moles) who seem to be controlled by an evil mole named Dr Talpia. He is trying to gain contol of the Rock Monsters and use them to gain full control of Second Life. You will get the story if you join the quest to gather parts from around the gid to make an anti-mind control machine to foil the evil Doctor. For some reason only premium members are invited to do this. I decided to try to help Tyra since I still roam the realms occasionally collecting crystals which I exchange for Linden dollars. It is good exercise and still fun! 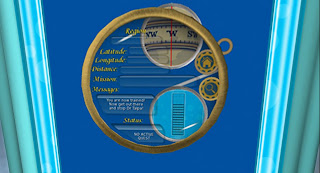 To begin, I visited the Isles of Ice where I collected a Monacle HUD and went through a tutorial on how to proceed safely. I saw the Laboratory where the machine will be built and checked out some  of the other structures on the Isle. I found the Ice Hub where there is also a full list of the places on the grid I must visit. My first quest took me to ANWR channel to search for the ANWR crystal.I put  on my hud which is very helpful as it tells you how far you are from the item you are looking for. I landed on the Oil platform where I heard a raspy voiced  Magellan tell me that he didn’t usually pull switches but go ahead and do it and he would “wait over there. “ 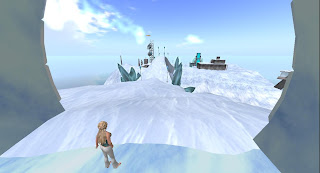 Wandering around down stairs, I located the purge crystal switch at the conveyer belt and saw the prims change to crystals. By the way, while you are doing the quests, Magellan’s voice comes to cheer lead you on the way. “Eureka!” He shouted. The monacle directed me to get to the Region Periscope, part of the Ice Isles and deposit the crystal in a crate in one of the buildings there. After it was done I was directed to go find a new quest at The Ice Palace.

I took the next quest to blow up the Lost Crystal Mine. It was on a lovely island that has walking trails across bridges and around and around. Finally, I left the trail into a deep cavern where a mine entrance appeared and I was able to blow it up and return for a new quest. 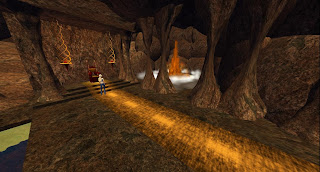 This visit to Pyri’s Funfair can be fun or no fun. A ticket to ride took me deep into caverns filled with explosives, barrels of supplies and tricks to defeat me. This is a maze that has many hazards that can send you home, or kill you and then send you home to begin again at the ride. I am, will be working on this one - LOL. I have died and resurrected at least five times so far, but I will not give up!

This is a quest not to be taken lightly. I have started and finished another two quests, but I f I wait until I have completed all the eleven you will never read this story. So I will leave you with that much so far and if and when I have worked my way through the last one I will let you know, if I am still alive!  I have decided that Magellan drinks quite a bit and wants company.  You can visit the grid to take a look at the tutorial and get your monacle here. You may run into some others along the way who are willing to give you tips,  or some who are not.  Let me know if you finish it all! Or you can call me for a few tips on your quests as you go along.  Good Luck!!