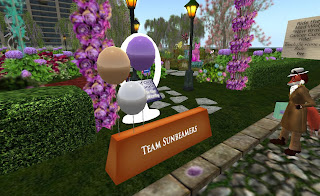 When I first came across the Sunweavers, I soon found out many of them belonged to a Relay for Life team, the "Passionate Redheads." The Redheads relayed for six years, raising over thirty thousand US dollars worth of Lindens for the American Cancer society. They had also come up with some truly great builds, such as the Wild West build in 2009. Sadly, the Redheads came to an end, and the team dissolved. It its place came two much smaller teams. One, was led by Sunweaver leader Rita Mariner, the "Sunbeamers."

"It's a new beginning," Shockwave Yareach, one of the Sunbeamers, told me, "we are a very small team." 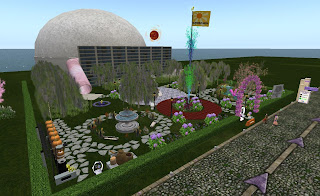 I met with Shockwave and Rita at the location of the Sunbeamer build in RFL Research. The exhibit was on the top left former of the sim, just north of Team Lag, and across the road from the Breedables exhibit. Half of the build was of a garden area, which was next to the road. The other half was a building in the back with pink tubes sticking out. The building's purpose was soon revealed by a sign next to the road, "Ride The Mad Wolf 'New Brain Cancer Cure' Ride."

"Basically, this time four of us did the work," Rita told me, Shockwave, herself, Dusk Griswold, and a newcomer to the Relay, Felina Fermi. Felina made the Newser earlier this year when she made a movie theater for her Sunweaver neighbors. "I … put her in charge of landscaping," Rita told me. "She's a very detailed builder," Shockwave commented. "We play all this by ear," Rita added, "and see what works." 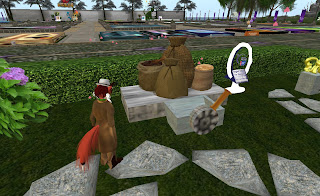 Attention went to one bag of coffee beans near one kiosk, "Who wants coffee?" Shockwave asked. Rita commented, "Once Shocky put down the ride, we knew what space we had left for the rest of the build." Shockwave pointed to the coffee, "I transplanted my coffee machine from the bay. Even added a table to sit and relax." Rita felt needed more was needed, and added more bags of coffee.

When asked what the theme of the build was, Rita answered, "Remembrance, remember those we have lost and hope for the future, that we will beat cancer." There wasn't much time left in the Relay season for another event, but they did have some fun times, "We did have the one event at Cutlass … where they tried to bid me human. … I got enough donations to stay a bunny. There were two kiosks, one for human, one for bunny. whichever one had the most donations by the end of the dance, I had to do. The bunny kiosk had the most, but not by much. I think we raised like 30,000L." 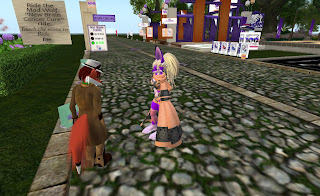 She also mentioned the event that was a cooperation with the New Bastogne WW2 RP, "The Bastogne event was fun, everyone was paying 100L to shoot the 88mm guns at the Dunk Tank and drop the victim. Dusk was the best shot, she got a hit with one round. I came in second with two rounds. Either way, folks were having a 'Blast.' … Have to repeat that next year."

Rita showed me around the exhibit a little. The place was bordered by a hedge fence with the front half a garden area with numerous trees and flowering plants, with walkways of stepping stones and a few waterfalls. There were also a number of pony statuettes around, "look atop the flagpole, Rainbow Dash," plus one larger pony statue in the middle of the grounds. There was also the pink fox statuette representing Artistic Fimicloud, the beloved vixen of the Passionate Redheads who passed away several years ago.

The back half of the exhibit was Shockwave's ride. It was a variation of the inner tube water slide ride, but instead of riding inner tubes, one would ride a red blood cell. Residents going in touch the stone to rez one, sit on it, then enjoy the ride. The narration is a bit quiet, and I had to turn up the volume. As the player goes down the tube, it talks about how the blood/brain barrier has historically been a barrier drugs couldn't get through, then the player emerges from the tube to the main room, "Behold, the brain." It then talks about recent developments in brain cancer treatments, and after circling around, the player leaves out the other tube. Upon exiting, the player can get up any time, and the blood cell soon vanishes. 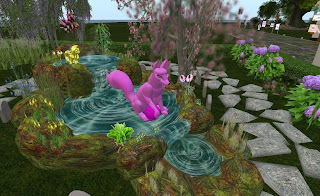 "Still pretty good for a first time team," Rita commented. She then noted there were a few minor details to take care of, notably getting a "Sunbeamer" flag for the exhibition, which at the time was flying the Sunweaver Estates one. Shockwave would later comment on Facebook, "You never know how much it takes to fill a half acre, until it's your job to fill it. Or mow it. Fortunately, I don't have to mow the thing. Constructing a 40 m by 40 m brain mock-up, things you never think you'll get the chance to do, and then one day you do them."

Rita concluded, "Even though the Sunbeamers are a very small team and we can't be involved with RFL 24/7 like most of the others, we will do what we can, as much as we can. Anyone that reads this, stop by our campsite, ride the ride and grab a cup of coffee."

The exhibit is at RFL Research (122, 224, 22), but will not be accessible to the general public until Saturday.