It's not just gaming sims, either, it's also club sims, shopping sims, even roleplay sims. I have personally witnessed the downfall of quite a few sims, due to the owners' greed. In this article, I will tell you about an RP sim that went under.

I used to roleplay at a Viking sim that is gone now, because no one would join. However, the reason no one would join, was due to the greed of the owners. It was a rule that anyone rping there, must wear the Spell fire (SF) meter. Of course, the SF meter will keep pestering the wearer, if their warmth is too low, which is determined not just by the sim, but also by the clothing worn by the wearer. At this sim you could only wear certain Viking clothes, and the only Viking clothes allowed were those purchased on the sim. This meant you had to pay to RP at the place. 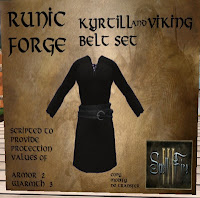 The greed of the sim owners went even further, when I learned that after I had bought the clothes, for L$ 120, even though the box said it would give warmth, the clothes did not provide even the slightest bit of warmth. Nor would the warmth they were supposed to give be sufficient enough to raise your warmth level. I then bought the next set of clothes for twice as much as the first, and learned that, again, they did not provide warmth. Not only that, I had paid twice as much, for the exact same set of clothes, I had bought previously.

Their greed was fueled by a lie, which I found out when I had actually asked them why everything they sold, on the sim, was never below L$ 120. The owner was quoted saying "We have to pay a tier for this land, to Linden Labs. Our scripts, alone, cost us L$ 3000 weekly." At that time, I was fairly new to Second Life, and had to do a bit of research. While they did pay a tier to Linden Labs, they wrote most of their own scripts, and the SF meter scripts are free to use, I know this because I have been to the SF main store. You get the SF sim and region kit, for free, and you only pay for scripts, once, and that's to buy them.

It is a sad thing to see, when an amazing place is shut down, due to the owners' greed. Let this be a testament to all RP Sim owners, out there, while its customary to have items, on your sim, that people can buy, you shouldn't get too carried away, with high prices. Nor should you lie, like these people did, just to get more lindens.

Theonlyjohnny Resident
Posted by Bixyl Shuftan at 11:00 AM