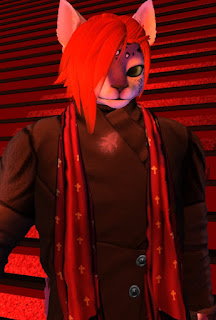 Coming back to your hold hunting grounds after a prolonged absence  always brings with a certain feeling of nostalgia.  There are inevitable changes, places and people gone. If you've been absent long enough, the landscape that greets you might convince you that you've arrived at your haunting grounds, instead.

But then there are also the welcome surprises, new vistas that, although not able to replace the longing for the old, certainly have new and wonderful innovations. New faces and old friends step forth to greet you, and recently the Lindens seem to be plunging their hands into the depths of oblivion itself to pluck echoes of the primmy past and bring them into our midst.

In a way, like the Gardens of Apollo, I am a vestige of the antediluvian days of Second Life, freshly plucked. Though I assure you, gentle reader, that the plucking was done by my own hand- I would hate for any Linden to have to be held accountable for my existence.

Between all of my accounts, I have been Second Life now twelve years, prim and dance-ball, and I have seen a lot. I've seen things you wouldn't believe. Ships on fire off the prow of the SS Galaxy (this was shortly before they reconsidered having those 'ornamental' antique cannons on board. And before they considered not allowing me any matches while on deck.) I watched floating objects in obscene shapes glitter in the studio lights as they interrupted Anshe Chung's press conferences. All those moments will be lost in time, like that latest new outfit you bought for the most recent social shindig and which has now been forgotten in the depths of an inventory so vast that entire sims go offline every time you connect.

Well, they will be lost in time, unless we talk about them, of course, and I can't think of a better way to introduce myself (anew) than to share one such moment of my Second Life past with you. After all,  I have returned and intend to stay for the duration (knock on wood, right?)

I am sure we all  have one of those stories from our salad days in Second Life, when we were bright-eyed and bushy-tailed, so full of innocence and faith in humanity before that accidental teleport landed you in Midian City. You know what I'm talking about: the first time you accidentally wore a whole house on your heads because you didn’t understand how to rez things in-world, or the time I broke my hair  by fiddling around with it  so that I ended up looking like something right out of a Buggles video, or that time you accidentally ran over a Linden with a flying genital…

This story hearkens back to the days when I was trying to learn how to script the hard way- by tinkering around with the code, and may god have mercy on your soul...

You see, one of the things I wanted, more than anything in the world back in 2006, was a little virtual pet.  Something that would follow me around, like a little drone or an obsessed stalker.

I always made the best of choices. 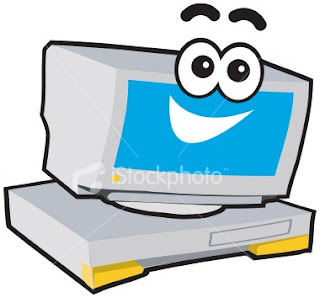 So I created this little computer monitor with a goofy smile. A pixelated, green-glowing tiny maniacal grin the likes one is likely to see shining at you from the darkness of an opium den. To this magistral idea, I added a bit of  floating text. This text proclaimed in yellow capital letters, "WILL YOU BE MY FRIEND?"
I want to remind you, reader, that I found absolutely nothing wrong with this at the time. What's more, I decided that I wanted the damned thing to not just follow me, but to follow anyone that got close. I guess I was going after the impression of  a lost puppy which would follow you if it had lost sight of its owner, lost and alone.
Being, as I told you, new at all of this, and only having the slightest idea of what I was doing, I ended up miscalculating how fast the screen from Hades would go.

The moment I released this homunculus of chaos, my screen froze. Once the client got its bearings,  I suddenly found myself halfway across the next sim, without a clue about  what had happened.

Let me remind you, this was back in the day before Linden Labs added some safeguards against what would happen when an object traveling at high speed would impact you.

You see, there had been a wedding going on not too far away from me.

Just as the beautiful, veiled  bride was making her way down the aisle, or so was reported to me, my most terrible Frankenstein's monster comes speeding in, psychotic grin on full display. "DO YOU WANT TO BE MY FRIEND?"

And then it twanged the bride into, and through, a tree.

To this day, songs are still being sung of how my makeshift scud stalker bounced off the gathered guests who were unlucky enough to be standing. Several of them made it into the stratosphere. I hastily made my way to the commotion only to find a scene straight out of a George R. R. Martin wedding, if the good people of Westeros had invested more in catapults than in daggers.

Once the intervention of a Linden had been secured in order to tame the tiny prim Antichrist, the guests and the bride were free to gather anew. The groom, however, had not yet come back online after being propelled across the sim and crashing. I hastily apologized, gathered up my electronic enfant terrible, and performed a retreat worthy of Napoleon attacking Moscow.

I didn't log back to Second Life for a week, and it would be a full year before I would try coding again.

But if you, dear reader, think that was the end of my misadventures, then you clearly don't know Second Life. I could tell you, for example, of the time that a most unfortunate sim crash led me to being teleported to another location and, to my great surprise, materializing hovering on top of an altar, completely naked before a congregation that was, at the time, celebrating the sacraments (to THEIR great surprise.)

But that would be overstaying my welcome in an almost Baron Munchausian way. I look forward to our future and frequent rendez-vous, because surely I will have more stories and items of interest to share with you. Second Life being what it is, hardly a day passes where something out of the ordinary doesn't come to pass.

-Kain
Posted by Bixyl Shuftan at 6:00 AM