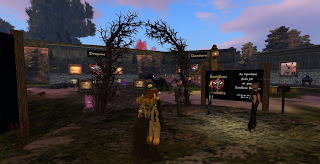 Sniffing around the Grid, recently I was whispered about something called the BattleBeasts --- dragons who are essentially breedables, but which also have combat statistics added. As I have not yet seen that concept in Second Life work to a satisfactory extent, I tracked down BattleBeast Resident, the maker of the Beasts, and together with Wynter Sommer, and Andi Canare (two others on the Battlebeast team; Wynter is the project dev manager and Andi is the director of marketing), we sat down to discuss what was coming forth as the BattleBeasts haven't officially been released yet.

Development of the BattleBeasts, which are a series of dragons, started last September. Battlebeast remarked he was facinated by how successful breedables are as a whole (when there's no one to sell to but others interested in breedables) and what he's done here is "cross-fertilized groups of interests". They bring something to the gamers (dragons and combat) and something to the breeders (the ability for the dragons to breed). It's a "synergystic" sort of thing --- better breeding means better battles, and better battles may make for better breeding afterward.

Now, obviously, SL isn't the greatest for programming. We all know that if you ride most physical objects, the control is garbage and you end up banking or barrel rolling, then faceplanting yourself into the nearest cliff. I asked Battlebeast the one thing he was unable to do in SL due to limits in SL, and what surprised me is that he has been LSL coding for several years. If he has that kind of experience, then limits don't exist, only workarounds. Indeed, the real challenge is getting it to work across multiple viewers (Firestorm, Phoenix, the default, etc). The only real problem is "there can be only so many ideas. Which ones are best for the breeders... for the gamers? Which ones do we use, what's the priority, what do we do afterward for the beta tests, etc." 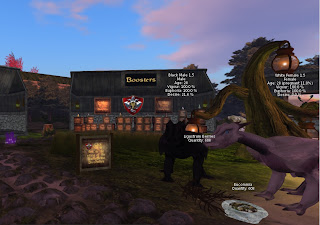 Naturally, being breedables, they require food and water to eat to keep up their strength. Based on and named for ancient herbal remedies, they influence the dragon's Vigour (akin to health), Euphoria (happiness; an unhappy dragon probably won't mate) and Desire. There are also boosters to boost up the statistic in question, with each booster being allowed only once every 24 hours. Battle is done by HUD, in a turn-based manner, and the person who drops the other one to 0 HP first is the winner.

BattleBeast Resident further said "Our goal is to be innovative but also recognizable for breedables fans. For many breedables, things can be passed down in a sort of 'it either gets this trait or it doesn't get it'; here we get the possibility to strengthen it the more it breeds in." I mentioned that I heard they could "patrol" a person's land. Naturally I thought this was a security feature built into the dragons (which I think would be nice, but according to BattleBeast, "The idea was floated, but we're not trying to be in the security business. It's just random wandering."

Sure, all of this is well and good, but can they compete with the Meeroos and the other more famous brands out there in Second Life? "Yes. We don't have dreams of being rich, but we do have dreams of being successful. We're inspired by what has come before us and have improved on that. We've developed a 'touch-coupling system' for breedables. You can pick which dragons you want to breed rather than waiting for random connections. ... or if you want a free for all, you can do that too."

What about variety and cost? The 'roos have dozens of patterns, and they're also expensive to upkeep. BattleBeast had this to say: "That's one of our trade secrets. We have the colors, patterns and textures for a lot of dragon types, but we're keeping a tight lid on that, for now. There are five in beta, but we have a lot of surprises coming. There were 50 people in the closed beta test, and we expect many more for the open beta. Cost is another secret for now, because right now the hype is high. We would rather keep the energy focused on the energy on the dragon. The moment we shift that focus away, it takes away from the entire experience. Not one person visiting has asked the cost, nor what they have to buy in order to get the dragons going. Nothing talked about price at all. It's not where we're focused. It was never about money, it's always about experience to others." 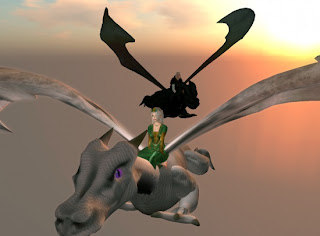 One thing that surprised me is that Battlebeast said there is already a LOT of interest on these dragons coming up. "In the beta, people are excited. And I mean excited. They're making sims, castles, stories, everything. There is a lot of interest with resellers and we have affiliates worked out along with our premere store. I am eager to release as soon as we can, but everyone else has the veto power so we can polish it to a perfect shine."

The Battle Beasts can be found at the Le Terassa Sim, (236/128/21) and will be available ... when they're ready. They plan on kicking things off with a two day launch celebration (which yours truly will probably attend). Everything else about them can be found on their website, at www.BattleBeastBreedables.com.

If the hype matches the product, they will give the Meeroos a *run for their money.* I'm going to play conservative here and give room for the hype to hit as hard as they're expecting it to. So I am going to say Four Dragon Hoards out of Five; I was going to give it three because this has real room to take off but the professionalism of the group that started this thing up was just through the roof and it would be wrong not to make note of it.

*Editor's Note* Check this review from Inara Pey.
Posted by Bixyl Shuftan at 6:00 AM