A few days ago, something called the Dranopia Quest was advertised on the login screen, and curious, I came to check it out. 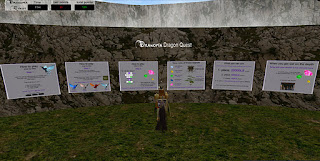 Visiting the Dranopia Quest area, you begin on a huge island in the sky, with the "rules" of the area over on the nearby wall. Your goal is to hop on a dragon, descend into the canyon below and try to collect as many gems as possible. It sounds simple enough until you remember that the physics of SL and riding flying animals absolutely sucks (I speak from my experiences as a gryphon with a saddle; if you bank, you either do a barrel roll or just tip over) and that there's an additional little difficulty spike in the game: You only have four minutes to snag the gems.

According to the wall of information, you get a choice of dragons to ride: Water Dragons add Endurance (ride a dragon for too long and it despawns; these last longer), Earth Dragons add Stability (not sure what this was), Fire Dragons add Speed, and Air Dragons add Agility (easy to control). In my first time there, I saw no difference in power, but that was just because the place was packed --- the place's a homestead, and almost at all times of the day and night it had the full 20 people on it. The whole place is a no-fly zone, fortunately there's a sign you can click for a landmark back to the top, or an "elevator" to bring you back up.

I like being able to control my character; in the various racing games I played as a kid, I always played a character with great control, not so high damage output or speed. So originally I selected Earth dragons for stability, until I found the Air dragons were much easier to control (especially at off-hours of the night when less people were around and the lag wasn't so bad). You move with the arrow keys; be sure to turn off local chat. Otherwise you'll be left typing a long string of Es and Cs as pressing E makes it go skyward and pressing C noses it into a steep dive. The diamonds themselves are worth points, with white ones (1), yellow (2), green (5), blue (10), and pink (20), and if you're thinking about flying through the same gem more than once for point-spamming, they don't register on the third fly-through (nevermind it's almost impossible to orient and do a second run through the same gem let alone a third time). 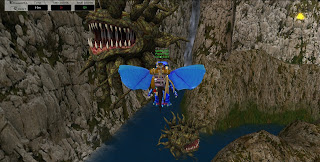 The obstacles include floating trees that make you lose control if you hit them, and the Groms --- enemies that bear a strong resembelance to the Malboros of Final Fantasy 6. Hit the former, and you'll go bouncing out of control, as they're physical objects. The same will happen if you hit the trees on the ground. Hit the Groms, and your points are blanked. This is not a good thing, as you want the most points you can in the 4 minutes alloted.

The one with the highest points by Febuary 9th wins a $20,000 $L voucher for the Dranopia sim, where you can buy the dragons themselves to decorate your home. As I understand it, the dragons are also breedables, but there doesn't seem to be much variation other than the four elements (and the fact they can be ridden).

Now, I know that flying on ridables isn't the most stable thing in Second Life. I have several quad avatars (yes, people can "ride" me) but the control is utter crap. And by that I mean there's absolutely no control at all. If you bank, you're going to tip over or do a barrel roll and then end up upside down. Control WAS crap while the place was packed to bursting, but when the place was empty it was a lot easier (not turn-on-a-dime easier, but still it's better than most flying areas that I've seen in SL).

Sniffing around a bit more, I tracked down one of the sim creators, Leni Galli. English wasn't her first language, so I have edited the interview slightly for a little bit of clarity.

Leni Galli: Hello, nice to see you.
Xymbers Slade: One sec while I get a good screenshot and then I'll ask a few questions. (smile)

Xymbers Slade: Ok, the first thing I wanted to ask, for those who haven't seen the quest area yet, what exactly is the Dranopia Quest you set up?

Leni Galli: First it is a fun game, and second it is to make Dranopia more popular (grin).

Leni Galli: Do you need more information about the game?

Xymbers Slade: So I see. I thought it was just something standing alone... and instead it's something to bring attention to this sim as well. :) How long did it take to create the Quest? It looks like it took quite a bit of effort to get it underway.

Xymbers Slade: And sure, more information about the game itself would be helpful (smile). 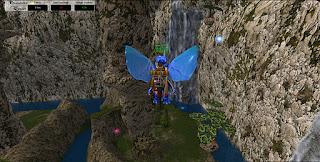 Leni Galli: Yes you are right, the Quest should draw some attention to Dranopia and to make it more interesting. Not only for breeders but also for people which like beautiful landscapes and storylines. We love to create landscapes and items with a lot of details especially sculpted prims and now also mesh prims. We needed one year to create Dranopia itself and the game was actually just a add-on for our breeders. But we are surpised that so many people are interested in it. The game is set very simple...you just have to fly around and collect gems/diamonds in order to earn points in 4 minutes and expands the story about Dranopia itself.

Xymbers Slade: So these dragons are breedables as well? Do you find you get a lot of business, what with the other breedables in SL being quite popular (especially the Meeroos)?

Leni Galli: Yes all of the dragons are breedables but we do not mention this because the word breedables seems to have sometimes a bad reputation. We can not compare ourself to the Meeroos because they are so big and popular and have a lot more experience than we do.

Xymbers Slade: Good point. I keep thinking that with the Meeroos available it's difficult to compete. In programming the quest, what was the biggest coding problem... or was there anything you wanted to do but could not? And what are the difference in abilities of the dragons? Other than looking pretty, that is. (smile)

Leni Galli: We hope to be as popular as they are one day.

Leni Galli: Oh yes we had so many great ideas but couldn´t realise all of them since we do not have that much space and too little preems. For example we would have liked the Groms to have an AI.

Leni Galli: Not only that the dragons look different and pretty but they also have different flight characteristics. For example the air dragons has agility, fire has speed, earth has stability and water has endurance.

Xymbers Slade: What do you mean by Endurance exactly? Do the dragons die off if ridden too long?

Leni Galli: Endurance means that they are able to fly longer in contrast to others. The dragons don´t die when you fly them to long, but they get tired over time and need a rest.

Xymbers Slade: What are the prizes for the Quest?

Leni Galli: if your name is on 9 February at the scoreboard, 1st place is a 20000L$ voucher, 2nd is a 5000L$ voucher, third is a 2500L$ voucher, and fourth through tenth is one Dranopia Starter Kit with a value of about 1850 $L. The voucher can be redeemed in the Dranopia Shop or Timmi Allen Team Shop.

Xymbers Slade: Ah, vouchers for Dranopia products, I am assuming. I take it the dragons will need food/water the same as any other breedable? (smile)

Leni Galli: yes, but they only need food. Other things are available, but they are not necessary in order to keep the dragons alive.

Xymbers Slade: What's next for Dranopia? Do you have any major plans to expand or add?

Leni Galli: Next, we plan the path of the ancients, and a "release" function. There will be the ability to release your Dragon into freedom. Your Dragon will say GoodBye and leave a crystal behind in order to be remembered by you. That special crystal can be kept as a souvenir and is able to give you ongoing information about your released dragon and its ancestors.

Xymbers Slade: That sounds like it will be very interesting to see once you bring it out (smile). That wraps up my list of questions; I'll write up a little review and point you to it when it goes up on the Newser. Should be sometime this week. :) Xymbers Slade: Here's hoping you become as popular as the Meeroos (smile).

Leni Galli: Oh thats so nice. Thank you very much and thank you also for your time, interest and support! Have a great time!

I'm giving it a strong 4 Dragon Hoards out of Five. I would have given it five out of five easily: the concept works and the effort really shows, but SL's screwed-up physics and the lag of a full sim really took away from it. Of course, now that it's out of the spotlight on the main login screen, it -should- be easier to navigate.

Xmbers Slade
*Note* - Dranopia Quest has a lot of mesh objects, so a mesh-capable Viewer is needed.
Posted by Bixyl Shuftan at 6:00 AM