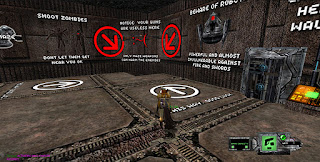 You begin in a large open area with a few vendors selling various weapons programmed for use inside the Maze. There are things like swords and blade-arms (good against flesh, not so good against robots) and there are energy weapons (designed more for blasting 'bots instead of zombies. After buying the "reloader hud" for 50 $L, I decided on a "Blade Arm" (short range, high damage) and hopped down to go into the maze proper.

The maze is just that, a maze. From my perspective, the upper levels look like an industrial warehouse with various zombies flitting about; I can see a Doom-ish influence here. I hit mouselook and began slashing at the zombies, and as I did so, they fell apart and as I moved closer I found they're physical objects. Killing them released "gems" which I had to walk over to pick up and they were added to my "hud" for eventual purchase of improvements to my weapon. Along the way there were a few terminals with buttons on them you can click (I had a good laugh over one button labeled "not bound", meaning it did nothing) with some opening doors and others releasing more monsters which I had to kill.

One problem I had was constantly entering mouselook and leaving it to click on my reload hud to reload a freebie pistol that is available (I figure there's a way to fire without being in mouselook but at the moment it escapes me). Another problem I had was that since the objects are actually -physical-, a lot of them in the area will lag the sim down. There was one area with about 6 or 7 "zombies" all grouped together as a single cluster when it was meant for them to be separate, and that slowed the system to a crawl. I saw the cluster fall through the floor twice trying to orient itself or move while the sim was computing how best to approach me and attack. Movement slowed and rubber-banded me back and forth as the sim repeatedly tried to compensate for all of the movement, and fortunately I've played enough of these game types to know to move away or around as far as possible until the system "woke up" and everything flowed smoothly again. On top of that, the "gems" are physical too, and walking over them sometimes kicked them instead of added them to my hud... I had to walk over them repeatedly. 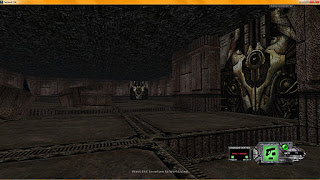 I didn't end up getting very far. On my furthest foray into the maze, I got caught in between prims in one of those tight spaces that makes SL think you're falling. Couldn't move or jump or even fly out... easy prey for the zombies.

I tracked down the owner of the Maze, Chainsword Audion, and asked him a few questions...

Xymbers Slade: How long has the Maze been active, and what is the main objective?

Chainsword Audion: It opened a few months back. Its objective is to bring some fast paced action adventure to Second Life. Dancey clubs, beaches and lag are something we already have enough of.

Xymbers Slade: What kinds of critters can be found in the maze? Any power ups, puzzles, etc?

Chainsword Audion: New enemies and content are being added to the maze every so often. As of now you will encounter many kinds of zombies and robots. Puzzles yes; powerups: besides the weapon and hud everything you need is right here. #chestpat

Xymbers Slade: Any tips for survival in the maze?

Chainsword Audion: Bring friends. Do not let things get near you. Try to be fully reloaded at all times. Stuff like that.

Xymbers Slade: How long did it take to build this whole thing up?

Chainsword Audion: The maze has been something I have been working on since early 08. Created a total of 7 times and destroyed 6 times.

Chainsword Audion: This is unfortunately a part of Second Life. With careful managing of script resources though, this can be minimized.

Xymbers Slade: Is there anything you wanted to have the maze do/have, but could not thanks to the way SL works?

Chainsword Audion: Bigger battles. I would love to have large scale battles in the maze where you must hold off hundreds of enemies coming from all sides. This, however, is just not something that can happen with the amount of processing power Linden Labs chooses to allocate to a homestead or even fullsize sim for that matter. Would gladly be willing to shell out some cash to cover a hardware upgrade fee, however, that is not an option offered.

Xymbers Slade: What kind of improvements are you planning on making for the Maze in the future, or are you going to let the work stand for itself?

Chainsword Audion: I have several ideas for improving the hud and adding a possible armor feature. As for sure things though you can expect to see extensions to the bottom of the maze as well as new enemies and weapons. (only a little under 50% of the maze is actually finished)

Xymbers Slade: Any parting shots for those who want to make something similar? Pitfalls to avoid, words of wisdom, etc? 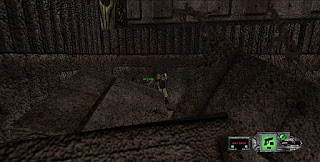 The Maze can be found at Tamarillo Island (238 239 1170). I'm going to give the Maze 3 Dragon Hoards out of five. The effort shows, but the SL physics take away from the overall effect and shoot 'em ups like this aren't my thing. Still, the pricing of the weapons is right (gotta support the sim somehow) and it's a nice thing to visit and try out if you're into this sort of thing.

Xymbers Slade
Posted by Bixyl Shuftan at 2:04 AM