Gracie Kendal danced in paint speckled jeans and a comfy top surrounded by the towering 1000 Avatar exhibit. Her friends danced right along with her at a pre-release party for Volume 2 of her book.

Kendal's photography focused on the concept of online identity: what it means to present ourselves in a virtual manner, how we fashion our avatars and why.

It began with a Second Life group show held on Caerleon Island called "Ambiguity of Identity.” Back in 2010, several SL artists worked together on the project.

"So we were already having this conversation about identity in Second Life," said Kendal as we sat in a social area a day before the party. We were surrounded by the avatar pictures beyond what your camera could observe. One literally had to cam upward and around to see the entire exhibit. "I can't remember the exact moment or inspiration...most of my artistic work is spontaneous. But when I come up with these ideas, I just go with them immediately.” 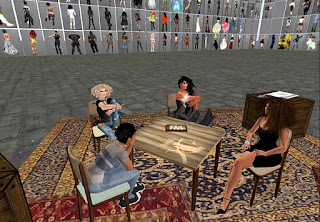 "Second Life allows us to be what we are in the inside. We understand what it means to don a persona, an identity, a personality, a mask, an avatar and either be someone else, or explore another aspect of ourselves or find our true self. Avatars are amazing inventions," Kendal mentioned.

What began as a collection of one hundred portraits to illustrate the idea of online anonymity, evolved into a documentation of SL avatars. She began her project Oct. 23, 2010 and finished it Nov 2, 2011.

"The portraits record a moment in their lives of more than a thousand people who are, to me, fearless," she explains about her first book. "These people have put themselves out there into the brave new world of virtual environments as explorers searching for anything and everything. They are amazing, creative, soulful people who I am so honored to have in my project."

The project is immense. You have to see it to believe it. It's 2,438 prims, 100 x 100 meters across and 68 meters tall. Kendal knew what she wanted to do because her Masters Thesis show featured portraits done of herself as part of a transition for the project as "My Life as an Avatar." She had before and after portraits in real life where she stood in front of a gray background.

"Initially I set up a little platform above my studio and started Iming people from my friend's list," she said. "Within a week or so I had about 100 avis. Then I started putting out notices in the groups I am in, as well, asking friends to tell their friends. Then the installation got into the destination guide and I started getting IMs and emails asking to participate. It has been a steady stream of people ever since."

The project was mentioned in the Second Life group on Facebook and that has increased exhibit visitors. She had to take a break from shooting for awhile because of computer issues, but when she came back, she moved full steam ahead on finishing meeting her goal of 2000 avis. She just reached the goal last week.

What did she learn from the project? That would be how important this is to the history of Second Life.

"Especially because Second Life isn't the buildings, art or clothes, it’s the people who are here who make this world what it is," she told me. "I'm really honored that they would want to be part of this."

She thinks these avatars stand proud and represent so many more who covet their online identities. 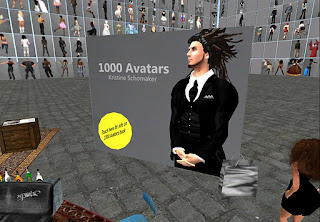 "A big part is also anonymity," she mentioned. "So it’s stressing the idea that we can come here and be whoever we want." Asked if she sees a pattern emerge in avatar use she replied, "I noticed a lot more women or women avatars, definitely more human."

Kendal self published her book, “1000 Avatars” so she could have control over every aspect of it. She dedicated the first volume to a dear friend of hers, the late Delinda Dryssen. The 160-page softcover book was published May 31, 2011. It sells for $62.95. Email her to order it at krisartlvr@verizon.net.

Netera Landar
Posted by Bixyl Shuftan at 6:00 AM