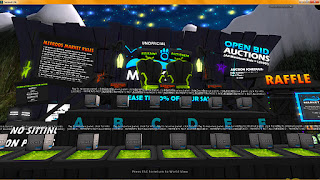 Having immersed myself into the Meeroos, I decided to head out and head for the Meeroo sim itself and check out the Meeroo Auctions they were having over there. I was surprised that such an auction house existed, but I probably shouldn't have been - I tell others "if it exists in real-life it exists in SL" all the time. I went over expecting to see a lot of shops and hear barkers giving prices for Meeroos, and I was not disappointed.

The sim is one big Meeroo store, with almost all traits, breeds, and varieties represented. I saw several places that had a lot of "rare coats" and a lot of "random nest givers" that promised good breeding lines and rare, normally-expensive 'roos at much cheaper prices... if you got lucky. Of course, seeing so many "rare coats" in one place kind of dumbed them down for me, I saw one pen filled with blue-coated meeroos that were supposed to be "very rare." Naturally, the more common the meeroo, rare coat or not, the less it would potentially be "worth." 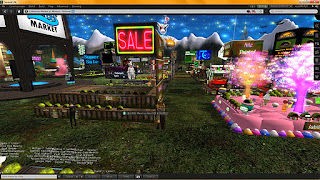 In one corner of the sim, Auctioneer Emra Jantzen was calling out various meeroos and their bloodlines, sounding much like an overexcited infomercial. I mean that in a good way, because she had a LOT of interest and a lot of people clustered around the platform, all of them making various bids on the various meeroos presented before them. I caught up with her after her shift and asked her a few questions on the whole thing.

Xymbers Slade: How long have you been "hawking the 'roos"? Can you give a little bit of history behind the auctioneering here?

Emra Jantzen: I have been calling Meeroo auctions since late July, but Meeroo Market opened in late August. Daemon actually had a market on the sim but no auction area until August, when he decided to cash in on the growing trend of auctioning meeroos.

Xymbers Slade: Was it hard getting started? Did you just set up one day with a handful of nests and start calling them out?

Emra Jantzen: I actually started out as just a customer, new to meeroos, watching the auctions. I've been a DJ in SL for years and thought, how hard could this be? I didn't really think it through. It's a lot of work. I started at another auction house and was hooked at my first auction when I managed to sell a loch for 75000$L.

Xymbers Slade: How can you tell if a particular meeroo is very valuable, or is it just "the more traits the better"?

Emra Jantzen: It follows a simple supply and demand theory. The less there are of a coat the more valuable it is. If a rare coat has traits, that just ups the value more. If you come to one of my auctions you can hear me preach this, the more traits on a coat as possible. If a roo has just a coat the value will go down. If a roo has a rare coat with 3 good traits, its going to hold its value.

Xymbers Slade: How difficult would you say is it to get the particular traits? Is it luck, skill, patience or all three?

Emra Jantzen: Patience and skill with a dash of luck. If you know what you want and can wait it out you can get it. Knowing what is in the background of your roos genetics is key. I personally have managed to create a very reliable long mane line from two chest fluff off springs. It just took me awhile.

Xymbers Slade: How much would you say a Tribal with clear eyes, short tail, and short upturned ears would be (as that's the one I think I want the most)?

Emra Jantzen: A roo is only worth as much as someone will pay. That being said, I have seen tribals with no traits being sold for anywhere between 125k to 150k. The traits would add a significant amount to the price.

Xymbers Slade: Does it surprise you how much some of these meeroos go for? I was hearing bids of 4000, which is almost $20 USD, for 13 linked prims. (smile)

Emra Jantzen: Yes it does. You came on a bad night, we have sold roos for more then 150,000Ls here, and I have seen them priced for much more in markets. I always told myself I would never pay more then 5000 for a roo. I bought my first jubilee for 25,000. I think it gets kind of addicting at the auctions and before you know it you are bidding right along with everyone else.

Xymbers Slade: I heard the most one went for was $350,000L. What is the most you've sold a meeroo for, and where does the money all go?

Emra Jantzen: I don't have all of the high end roos that a lot have. I refused to invest in them for a long time and so I have fallen behind. The best one I sold was a Chest fluff back when they were selling for 16,000. I can't say where everyone else's money but mine actually goes to my RL. Being a single mother, the money from my auctions has really saved me a number of times. I actually paid my electric bill and rent last month with Roo money. I also pay my tier in world and pay for food for my roos. My tips last week will buy my kids Christmas presents when it gets in my bank.

Xymbers Slade: Finally, what do you think the chances are of a 'roo having "all" special traits (a hair trait, eye, rare coat... everything)... has it happened? What kind of price would it fetch?

Emra Jantzen: I have never seen a roo that had it all, but I personally know a few breeders who are trying. One in particular has come close, and you can sometimes see the results of her breeding in our auctions. We call them Callista Roos. I can only imagine how high they would go for when someone does manage to get all the traits in one roo. 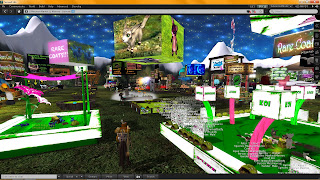 Now, I've come close in my own meeroo breeding. I've gotten a couple of "short shorts" as they're termed, meeroos with the traits of "Short Tail" and "Short Upright Ears" (there are five possible "trait" slots, one for head shape, tail curl, clear eyes, ear shape, and coat). While I don't think I'll be putting them on the auction house (I want to see if I can get anything good out of my 'roos first), this is a good example of SL helping support people in real-life and what SL could be for everyone if done RIGHT. While I couldn't last more than ten minutes listening to someone bark out the virtues of something, I'm still giving the Meeroo Auction House five Dragon Hoards out of five. It can be found at Meeroo (218, 223, 25) so if you're looking for a possible bargain on the 'roo craze, that is a good place to check out and shop.