The Nine Circles of Hell 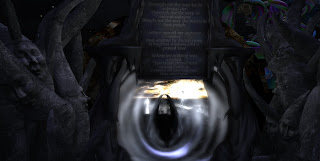 Seeing what I thought to be an interesting location in the Destinations list on login, I headed over to the Lea Full Sim Art Series at Lea6 (124,164,625) to find Rebeca Bashly's take on the Nine Circles of Hell. All nine are represented, from the frigid land of the 9th circle (for those who commit treason) to the wearing of lead-lined cloaks and people walking backwards with their heads turned around (the Hell reserved for fraudsters and the like). On seeing the sign overhead before the entrance, I went in with high hopes figuring it was going to be something very much worth talking about.

In the first circle (Limbo), it's decked out as a large castle with ghostly forms sitting around, as if waiting to be redeemed. Ascending to the middle of the castle, the teleport up there dropped me down to the second level, the eternal hurricane of Lust (where those who let lust guide them are supposedly eternally blown about on an ill wind). After watching the ghostly faces within the hurricane spin for a minute or two, the next teleport led to the circle of Gluttony awaited. There, an "icy rain" fell on the souls of the damned, fored to live in disgusting slush of some kind for all eternity. From there it is a descent into Greed, showing souls pushing giant boulders back and forth with their chests.

After a visit to the land of the greedy, it was off to the fifth circle (Anger) where sculptures of large groups of people eternally fighting on the surface of the River Styx were displayed in a massed jumble of bodies trying to tear each other apart (an article in Wikipedia I looked up remarked that the souls are "locked in" to their level, forever stuck in the mindset of the "theme" the circle is supposed to revolve around). After that it was off on a trip to the City of Dis, the sixth circle (the circle of Heresy). Guarded by what appeared to be three gorgons or medusae at the front, the entire "city" was a bunch of flaming holes with bodies in them. 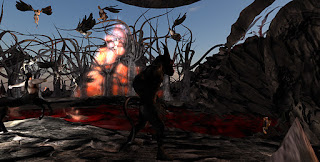 The teleport at the back led to the 7th circle of Hell, where those who subscribed to violence in life were punished. Met at the entrance by the Minotaur (guardian of the level), this one to me was the most defined, with three very visible "circles" within. The first showed the outer ring where centaurs shot at sinners immersed in a river of blood and fire; the inner circle showed the "wood of the suicides" being beset upon by the harpies, and the center showing the blasphemers being stuck up to their heads with fiery flakes raining down on them. Once I went to the teleport at the other end of the rings, it was off to the 8th circle of Hell, the Malebolgia. 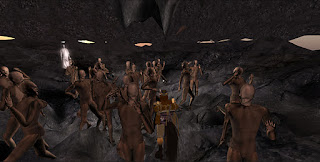 The Malebolgia was full of many little "mini islands", each showing souls suffering in one way or another (one group in lead-lined cloaks, another group wandering eternally with their heads turned all the way around so they could not see where they were going). This is the home of those who were frauds in life, unable now to see the truth and how to redeem themselves. Finally it was off to the bottom level, an icy wasteland with the devil himself at the center, with wings flapping. Lots of faces frozen into the ice here, with no escape (literally, I had to teleport home to get out of the sim). 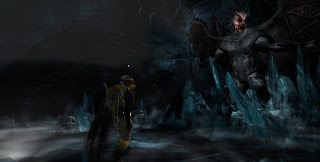 It's all in all a very nice piece of artwork and the effort really shows, but what seemed to be lacking here was interactability. There was nothing to click, other than the teleports from one circle to another... no signs revealing information about the various levels or punishments (or various "lyrics" from the Divine comedy), no ability to *be* one of the souls and float around in the river on the 7th circle and experience it... nothing at all. That kind of dumbed down the whole experience. That is why I'm giving the whole place a guarded three Dragon Hoards out of five. It's a nice place to visit, see, and interpret for yourself, but there's no replay value, at least not to me.

From the LEA Full Sim Art Series, "Nightmares," directed by Urban Steampunk, "Not every dream is a good dream and sometimes nightmares can be significantly far more than just bad dreams...."
Posted by Bixyl Shuftan at 2:07 AM