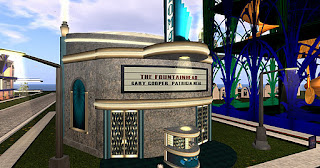 The Virtual Museum of Architecture (VMA) held its annual Fall Build-off on Builder’s Brewery, located at Builders Resource (111, 30, 22). Djinn Dasmijn was the Build-Off Coordinator. The theme was Art Deco, a style developed in the 1920’s and 30’s. During a whirlwind 48 hours, competitors designed, built, textured, and tweaked their creations. The aim of the competition was to see who could create the most functional and appealing Art Deco commercial building. There were two categories: Novice and Pro, for residents who had previously sold builds. When the building ended on Sunday, SL residents voted for their favorites.

Djinn Dasmijn stated, “I am impressed with the quality of builds our competitors come up with at each build-off.” There are two large competitions held each year, with a different theme each time. This was the first time the Art Deco theme had been used. Dasmijn said a small contest was held to select the best Art Deco trophy. Because the Build-Offs are so popular, Dasmijn may be adding smaller events throughout the year.

There were 21 competitors this year, 10 in the Pro category and 11 in the Novice. The variety and quality were amazing. Among the builds were restaurants, department stores, a theater, and even a dolphin sanctuary. Some of the builders created notecards about their inspiration or method of creating the piece, which I found very interesting. Camden McAndrews, for example, first built a 1:32 scale model of his structure. 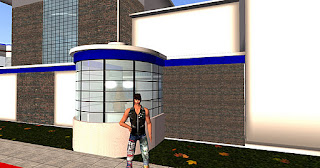 One competitor, Darkforest Dean, took time out to talk about his build and allowed me to photograph him. He placed a radio that he had made inside his structure, and the radio served as the inspiration for his build. Another builder, Levi Ewing, built a tall, luxurious “Flag Ship” store to symbolize the richness of the 1920s and capture the mood of the carefree lifestyle people were experiencing then.

Morgan India created “The Hindenburg Club”, a sky harbor/bus station redesigned into a “high-class speakeasy”. India’s entertaining notecard explained the problems faced by executives of Dirigible-Omnibus Harbor, Inc. that resulted in this structure. India’s real inspiration for the build was a hangar at Lambert Field and by Art Deco icons, such as the Paramount Theater in Oakland, CA [1931], the Musical Hall in Kansas City [1932], and the Gold Ballroom of the Overlook Hotel. 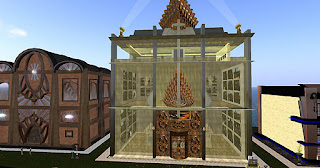 A very unique design was the Mariposa Dolphin Sanctuary, built by Enoch Kips. This two-story structure had a second floor observation walk where you could watch the two rescued dolphins swim. Movies were well-represented in the competition, too. A great corner theater was built by Deo, while Simi Firehawk’s stucco, glass and gold structure included Casablanca posters and pictures of movie stars inside.

The end of the competition was celebrated by a dance DJ’d by Etoile in the exhibitor’s area. The Winners were announced at an Awards Gala on Monday, October 24th, from 7:00–9:00 PM SLT, on the competition sim.