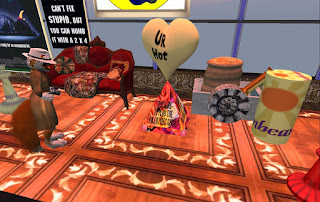 For those looking for something fun to do, Shockwave Yareach has something for this time of year. For this Valentine's Day season, he has a new game out, the "Big Box O' Candy." He announced the game in Sunweaver chat.

There is now a pair of vendors to the Valentine's Game.  One is in the Club Cutlass, and the other at the train stop on the ground.

Anyone can play -- in or out of the group.  Game is free to play.

There are 12 candies hidden in Sunweaver Bay.  As you touch them, a chocolate appears in the box you carry.  Find all 12 and give it to your loved one, and they
will get a special prize.  (And hopefully so will you.) 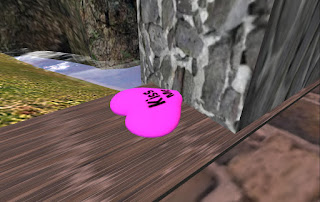 To play the game, head to one of the vendors carrying it, a large rotating heart candy that changes color over a pyramid. As Shockwave mentioned, one is in Club Cutlass at Sunweaver Bay (114/117/757), located next to the wall near the movie poster. The other is at the Sunweaver Bay train stop at the end of the main railway line. Just touch it to receive both the instructions and the box of chocolates. Just "add" the box for it to appear in your arm (you may need to adjust the box if it appears too deep into your avie).

After that, you look around for twelve candy hearts scattered around the Sunweaver Bay sim. They look like the rotating heart over the game vendor, but smaller and are a single color. Obviously some are easier to find than others. Some are more or less out in the open. They're either at ground level or on a hill. None are underwater, Shockwave musing, "They dissolved when we tried that." Some are in public buildings, but none are in a private home. Each time you touch one, another chocolate appears in your box. 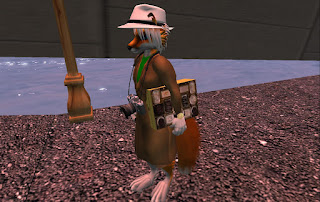 Shockwave says if you find all twelve, the person you give the box to will get a prize, "Find all dozen and then detach the candy box.  You can now give it to your sweety. And since some of you have several sweethearts, it is set copy as well as transfer so that you can give out as many as you like. When your love rezes the candy box, if all 12 candys have been found, she will get a special prize.  And hopefully you will get a special reward from your honey for all the hard work you did - you don't have to tell her that you had fun." While you can give away an unfinished box, no prize will be given.

Going about the sim myself, after about half an hour I myself found ten of the twelve candies. How many can you find? Play the game and find out.