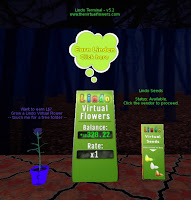 This week, on July 11th, 2016, marks the new and very exciting release of the Lindo HUD v5.29 and new Seed Dispensers v1.6 for Terminal Owners.  This allows Players AND Terminal Owners to gain MORE Lindens!  Yippee!

To recap on what Lindo actually is, it is a relatively new game designed to increase traffic and earn L$ very easily.  The HUD was made very simple and is beautifully flawless in its design and function.  You just add it, and click the watering can to water your virtual flower.  You are able to water flowers, in areas wherever the sun on the HUD is shining.  If the sun is not shining, you just click the "Get A Location" link on the HUD to teleport to a different place that has the sun shining, so you can water your flower.  One will earn L$ as it grows and reaches full maturity.  Then you verify a simple mathematical equation to start growing another seed.  The HUD does come with a few free seeds, but eventually you will need to buy some or pass a copy of the HUD to your friends to earn some free seeds (currently inactive, but will be brought back for a limited time).  When you withdraw funds, they come straight from your HUD, there's no need to visit an ATM.  This is a reliable game you can feel secure playing, as it is Alt and Hack proof!  Store owners set up a Terminal and Seed Dispenser, wherever they want to increase traffic.  They can set it to SIM or Parcel and add pretty much any amount of L$ they would like to, into it. 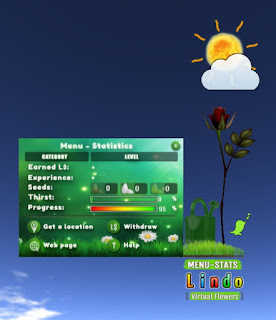 Lindo certainly has come a long way since my husband JonCernunnos and I first discovered the very colorful Lindo Headquarters, neighboring our home in Bonita Beach, back in May.  As for our bet on who is making more money at their game, I reluctantly agree that Jon is winning.  Even though I have been playing for close to two years now, after deducting the cost of all my fishing equipment, Jon is at least, an astonishing, 5,000 up on me by having played Lindo in just these three months, ha ha!  Jon and I have continued to love working very closely with the friendly and professional Lindo team.  I am the Official Article Manager, and Jon helps test new improvements while participating in group chat and events.  Lindo has a great team of support agents who always seem to be showing up at events to greet the patrons and help support the shop owners' advertising and questions, in many languages.

Lindo was created by a Turkish gentleman, Sofistik, about a year and some months ago.  He says he it took about four months to release beta tests and about two months of a stable version, and that people knew about it in the 4-5 month range.  He says it all started when he was trying to write some scripts for a girl and her roof-opening building.  A friend of his saw the roof prototype and told him it looked like a flower, which brought the totally unique Lindo project of increasing traffic, to life.  Now about 400 unique players join, weekly.  Sofistik noticed a few months ago, Russian, Turkish, German, and Italian people started playing.  Mainly, Lindo goes by word of mouth, as passing a copy of your HUD earns you free seeds (currently inactive, but will be brought back for a limited time). 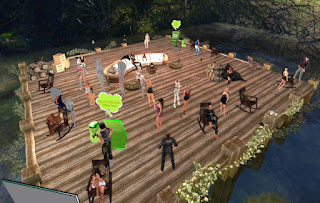 Sofistik is always improving his products.  He deems himself "obsessive about the design to make things as perfect as they can be," and rightly so.  The future of Lindo is here, and it's great to be a part of it, as Player or a Terminal Owner.  Upcoming for the future of Lindo, Sofistik is considering allowing players to grow their own flowers to be rezed inworld.  We will keep you posted on new developments, but in the meanwhile, here's wishing you a green thumb!

Additional Information:
SLURL: http://maps.secondlife.com/secondlife/Bonita%20Beach/22/51/23
URL: http://www.thevirtualflowers.com/
ADDITIONAL URL: https://www.facebook.com/lindovirtualflowers/
Group: Lindo
Preferred contact: Sofistik , Jenni Witherspoon is the English Helper, Xaria2016 and many other helpers can be found at their HQ's SLURL too

Addition: In December, the Newser was told that Jenni Witherspoon is no longer with the company.
Posted by Bixyl Shuftan at 11:00 AM