In the previous part, we learned about how JasX managed to succeed in game creation, but Jas has also had a few mistakes. While games like TiS, BARE and Fright have done extremely well, one game didn't quite top the charts in sales.

“jFish. Nobody plays jFish," Jasdac Stockholm explained, "I wanted to take on 7seas, but I guess fishing just isn't popular on SL. It's a bit of a niche, something you could do when there was nothing else to do. jFish was a really good learning experience for website-scripting though. By today, jFish has 1377 players. I'm not even sure if I've made back the Lindens I spent uploading content for that game, so I guess it's pretty dead in the water.”

Not to be deterred by a single loss, Jas moved on to some more familiar projects, ones that are still played today. “jFish was released in early 2012. Since jFish was not doing well, I decided to start anew at an adult game. This time I wanted to explore PVP, so I came up with Fright. Fright is probably the quickest 'big game' I've ever made. ... Oh yeah, mesh came out just as I was rounding up TiS, so Fright was the first game I made where I completely abandoned sculpties, since they're really bad. I think Fright took less than a month and a half to make.” 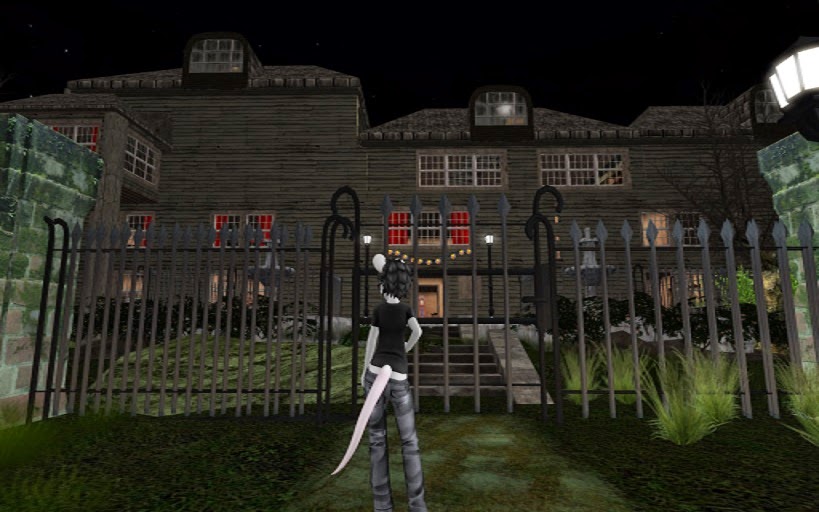 During the creation of Fright, Jasdac began to sit down and show his process to his growing fanbase, starting to create on stream for all to see. From these, others could learn how to make their own mesh objects, including potential levels for both Fright and TiS “I also remember streaming a lot of tutorials on mesh. When I made the game I wrote down all the meshes I'd like to use, then I'd sit and stream for hours at a time while I just worked off that list. It wasn't very fun, but some people enjoyed it.”

“My reason for making Fright was to just make something people could enjoy for Halloween, but it did get some traction, so I made two additional maps and some extra game modes. It was fun all in all, even though the fun of playing died down for me quite fast.”

Stay tuned for part 4, when we take a look at BARE, what inspired it, and talk a bit about Jasdac's Dungeons and Pandas branch!

Locke Esgal
Posted by Bixyl Shuftan at 6:00 AM